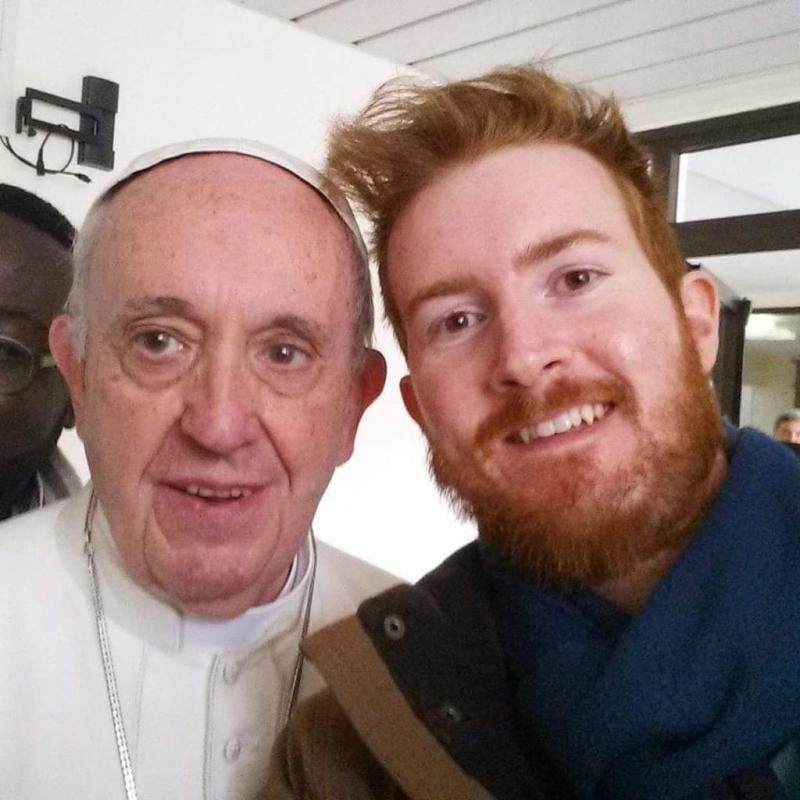 James Kelliher the Communications and Events Coordinator for Westminster Youth Ministry, writes about a week in Rome, covering the Pre-Synodal Meeting of young adults.

‘At the Cardinal’s request, I went to Rome in March to work in the media team at this event in the lead-up to the Synod of Bishops this October, which will be focused on “Youth, Faith and Vocational Discernment”.

Three hundred young people from around the world, mostly Catholic, but with a few from other backgrounds too, came to Rome for the week, connected to around 15,000 young adults on the six Facebook language groups that had been created. Collectively, explored and discussed a series of questions, such as ‘In these times, what relationships, emotional experiences, specific events and places primarily determine the identity of younger generations?’ and “How is the person of Jesus, as recounted in the Scriptures, perceived by the young people of the third millennium?”
Thoughts and opinions were then condensed into a summary document, which went through a couple of revisions, as we suggested parts that were liked and disliked about each draft.
The final document was then presented to Pope Francis at the Palm Sunday Mass in St. Peter’s Square. That’s a summary of the purpose of the meeting, but so much went on, with many personal stand-out moments.

Working on the document
Being part of the media was a fascinating opportunity to see, from the inside, how such documents are put together. A particular highlight for me in this regard was being one of the editors of the final document. I won’t go into the exact details of how the teams put it together the, but I can say that we worked very hard, staying up very late and not getting much sleep. There was a great sense of accomplishment once it was completed and read out in the auditorium.

The fellowship of the media team
There were six language teams working in the media team for the Pre-Synodal Meeting: Italian, Spanish, Portuguese, French, English and German. In the English team, there was me and Alexander Balzanella, one of the seminarians from the Diocese of Westminster. As a result, I had the opportunity to stay at the place where English seminarians are trained,the Venerable English College (VEC). We were joined by two lovely American girls called Briana and Cherise, from a community called the Apostles of the Interior Life. We worked really well together, instantly clicking, and sharing many laughs. This made the work, which had its hectic moments, all the more enjoyable. Collectively, the media team was a great unit, made up of wonderful people with interesting and inspiring personal stories.

Meeting Pope Francis again
Five years ago at World Youth Day in Rio, I had the opportunity to meet Pope Francis, just a few months after his election. I wanted to take a selfie with him, but I was told beforehand that I wouldn’t have the opportunity to; the chance had passed by. But not so! This time I bumped into him at the university where the event was taking place. The chance had come and he was happy to oblige.

Palm Sunday Mass
The weather was cold and wet, but took a dramatic positive turn for Palm Sunday. With colleagues from the media team, we were part of the procession of young people carrying palm and olive branches from palm and olive trees from the centre of the Square into the basilica where we had places near the front. During the Mass, I realized more profoundly the rich history and tradition of beauty within the Catholic Church, a true beauty that calls to mind the divine. From the façade of St Peter’s Basilica, to the singing, the outfits of the Swiss Guards and others, and the simple harmony of how the congregation was organised, everything about the experience spoke of the transcendent.

The celebration at Castel Gandolfo
At the end of the week, after the final document had been approved, we were all invited to be part of a visit to the Apostolic Palace of Castel Gandolfo and toured around the rooms and museum sections, before heading to the gardens, where we were blessed to meet the winner of the Italian ‘The Voice’, the nun Sister Cristina. She sang some of her songs whilst we picnicked.
Overall, it was a wonderful week, and I’m grateful to Cardinal Vincent for having given me the opportunity to be involved in the Synod process in this way.