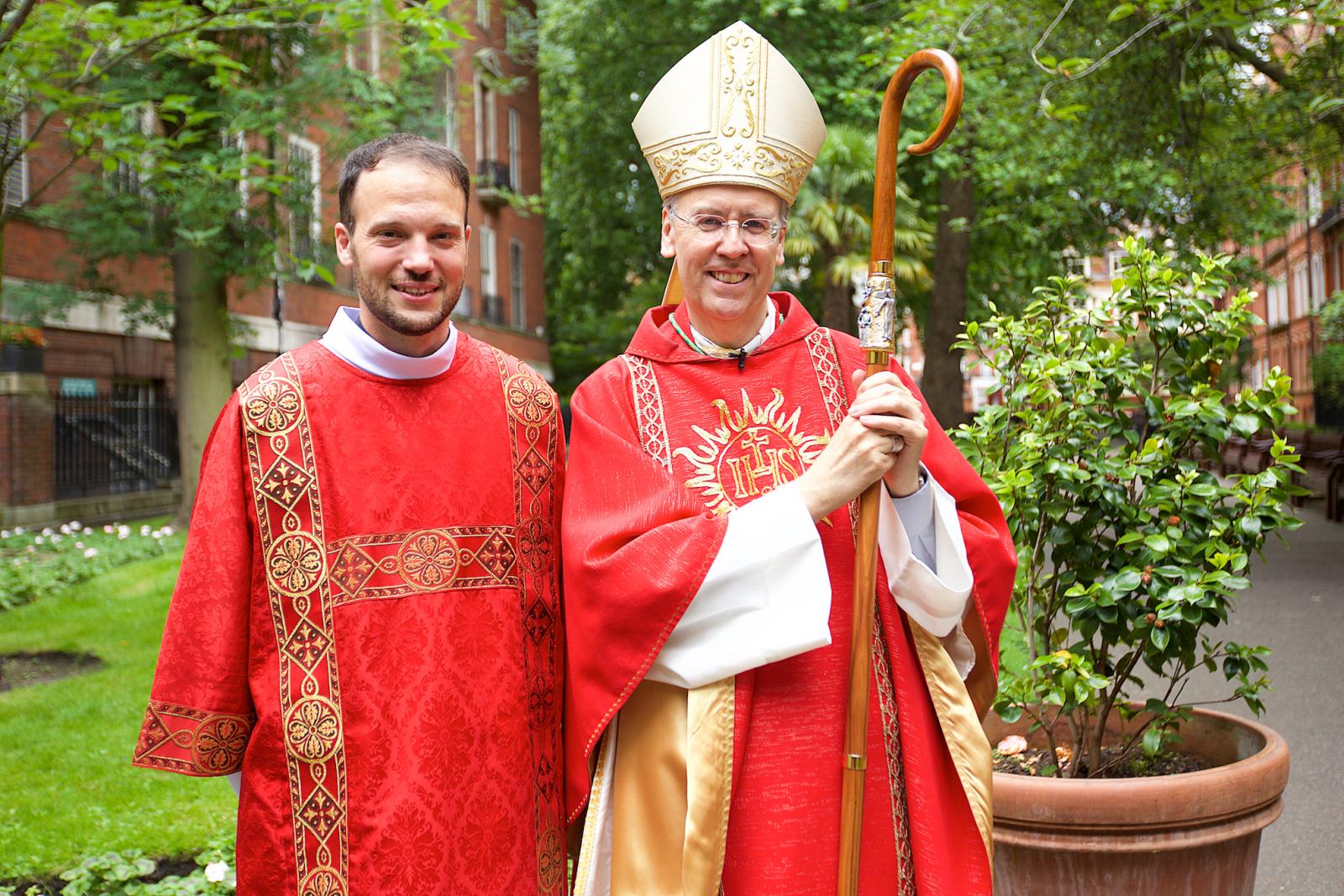 On 3rd July, Xavier de Bénazé SJ was ordained to the diaconate by Bishop Nicholas Hudson at the Church of the Immaculate Conception, Farm Street. The ordination was celebrated on the feast of St Thomas the Apostle.

The church was full to its Covid capacity, with a congregation of 90 people, as well as 18 concelebrants in attendance. After the Mass, a celebratory picnic lunch was held in the Mount Street Gardens and the small piazza adjoining the church. Some of Xavier’s family members were able to attend the ordination Mass in person. Xavier’s mother travelled from Marseilles and his aunt travelled from Paris to be there on the day. The two women were invited to quarantine in the Jesuit’s community house so that they could complete their isolation before the day of ordination.

As a newly-ordained Jesuit deacon, Xavier will return to France to complete one more year of studies at the Centre Sèvres, the Jesuit faculty of Theology and Philosophy in Paris. In addition to his studies, Xavier will be delegate to the Jesuit provincial, helping communities in France and French-speaking Belgium to implement Laudato Sí. He is well prepared for this work. This past year, Xavier has been studying for an MA in Theology, Ecology and Ethics and he has previously worked at the ‘Campus de la Transition’, which promotes ecologically sustainable ways of living. It is expected that Xavier will be ordained as a Priest in 2022.

‘In a delightful conversation we had two weeks ago, you shared with me your two great enthusiasms: the first, your love for Scripture; the second, your love for your beloved patron, St Francis Xavier. St Francis Xavier was, of course, one of the greatest heralds of the Gospel. The relic of his arm preserved in the Gesu church in Rome I always found the most eloquent reminder of this, it being the arm with which he baptised tens of thousands, in Goa, Ceylon, the Molucca Islands, Japan and more.

‘Still more impressive was St Francis Xavier’s sheer readiness to go there. Neither his propensity for seasickness nor his difficulty learning foreign languages deterred him from accepting, spontaneously, St Ignatius’s call to substitute for another at the very last minute: “Good enough! I am ready”, he famously replied.'

Bishop Nicholas compared the ‘zeal’ of St Francis Xavier with that of the Tyburn martyrs:

‘Who could ever doubt that Francis Xavier would also have gone the whole way to martyrdom had that been his calling? His was a call to ‘marturia’ of a different kind, to spend himself utterly for the people so as to collapse with exhaustion at just 46. His readiness to go opened up for him a glorious ministry.’

Bishop Nicholas spoke about the gift of celibacy, particularly the presentation of celibacy made by Pope St John Paul II:

‘Of course, celibacy is a gift. Its raison d'être is beautifully captured by the Rite when it reminds you that what you are about is nothing less than to “give witness to brothers and sisters in faith that God must be loved above all else, and that it is he whom you serve in others”.

'Pope St John Paul II echoed the Lord’s promise made through the prophet Jeremiah, “I will give you shepherds after my own heart”, in Pastores Dabo Vobis, the Post-Synodal Apostolic Exhortation on Priestly Formation. Central to his presentation of celibacy lay the conviction that it is about nothing less than configuration to Christ. It is identification with Christ crucified which is at the heart of celibacy.'

Bishop Nicholas also spoke about the Gospel story of St Thomas meeting Jesus after the Resurrection:

‘What a Gospel to hold in your heart as you give yourself in celibacy and in ordination through the laying on of hands! Suffice to say, Xavier, hear the invitation which the Lord makes today and every day of your life to place your finger in these wounds, your hand in his side; to doubt no longer but believe.’

Bishop Nicholas concluded his homily on the theme of pastoral charity.

‘The Rite describes celibacy as “both a sign and motive of pastoral charity”; and tells Xavier, “You will help the bishop and his body of priests as a minister of the word, of the altar, and of charity.” The Holy Father, Pope Francis, sums this up this juxtaposition beautifully in just in one word: service. “The Deacon”, he says, “is the custodian of service in the Church, service to the Word, service to the altar, service to the poor.”

'So, Xavier, what you are being asked, in short, is “to express in action what you proclaim by word of mouth”, as the Rite puts it. That is to say, express what you proclaim not only in liturgy but also in pastoral care.'