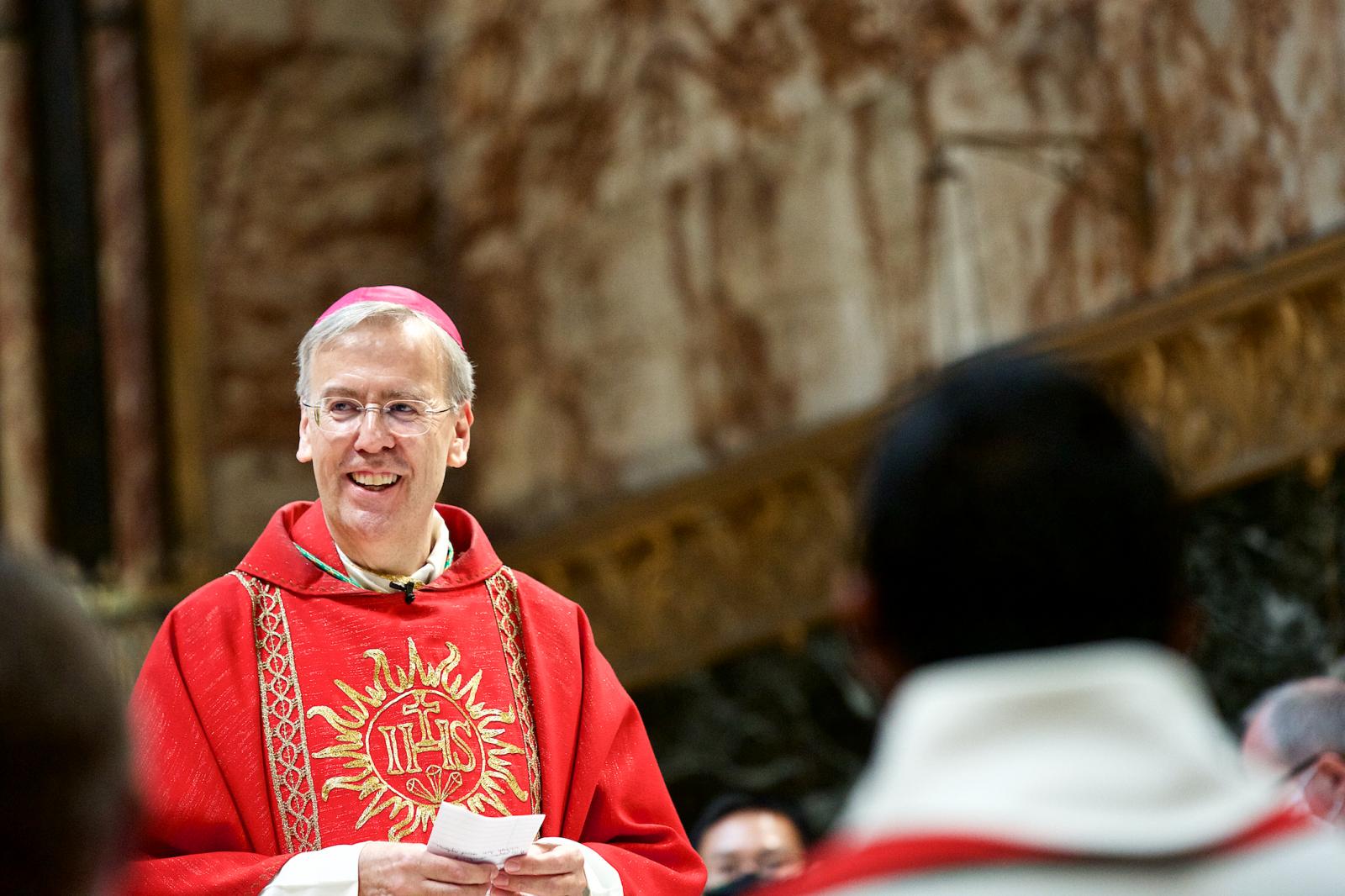 Given on 3rd July 2021 at the Mass of ordination to the diaconate of Xavier de Bénazé SJ, celebrated at the Church of the Immaculate Conception, Farm Street.

Xavier, you will probably never know fully the impact your becoming a deacon and then, please God, a priest, will have had upon all the people who know you. What you will know is that the impact will be all the greater if you’re able to respond with generosity, deep generosity, to the mission with which the Lord entrusts you today.

In a delightful conversation we had two weeks ago, you shared with me your two great enthusiasms: the first, your love for Scripture; the second, your love for your beloved patron, St Francis Xavier. St Francis Xavier was, of course, one of the greatest heralds of the Gospel. The relic of his arm preserved in the Gesu church in Rome I always found the most eloquent reminder of this, it being the arm with which he baptised tens of thousands, in Goa, Ceylon, the Molucca Islands, Japan and more. Still more impressive was St Francis Xavier’s sheer readiness to go there. Neither his propensity for seasickness nor his difficulty learning foreign languages deterred him from accepting, spontaneously, St Ignatius’s call to substitute for another at the very last minute: ‘Good enough! I am ready’, he famously replied.

‘Bring fire to the earth’ was what Ignatius in fact demanded of Francis Xavier. How poignant to recall that evangelical imperative, ‘fire to the earth’, just some hundreds of yards from Tyburn, where so many Jesuits and diocesans made the supreme sacrifice, inspired by the same zeal, to bring fire to the earth, in this case the earth of Reformation England. Foremost among these was, of course, your fellow-Jesuit St Edmund Campion, whose intercession we shall be calling upon shortly in the Litany of Saints.

Who could ever doubt that Francis Xavier would also have gone the whole way to martyrdom had that been his calling? His was a call to ‘marturia’ of a different kind, to spend himself utterly for the people so as to collapse with exhaustion at just 46. In Francis Xavier, we hear a beautiful echo of the psalmist’s, ‘he has put into my heart a marvellous love for the faithful who dwell in his land’, when he describes how the people of India ‘made a permanent bruise on my soul’.

His readiness to go opened up for him a glorious ministry. What is it, I often wondered in my early days of formation, that enables someone to step out into mission like that without hesitation? Most graphic, I think, is Kolbe’s one step forward into martyrdom. It’s surely all to do with prayer; with having given of yourself so frequently and consistently to God in prayer that, when the day comes, it’s a ‘yes’ you had been waiting, simply waiting to make. This long ‘yes’ of readiness is all of a piece with the promise Xavier will shortly make to be celibate for the sake of the Kingdom. You may be sure the ‘yes’ we will hear him make is the fruit of many years’ seeking to know that this is the Lord’s will for him.

Of course, celibacy is a gift. It’s a gift we should ask for. Saying ‘yes’ is about knowing you’re receiving the gift; and praying you receive it increasingly. Its raison d'être is beautifully captured by the Rite when it reminds you that what you are about is nothing less than to ‘give witness to brothers and sisters in faith that God must be loved above all else, and that it is he whom you serve in others’.

Pope St John Paul II echoed the Lord’s promise made through the prophet Jeremiah, ‘I will give you shepherds after my own heart’, in Pastores Dabo Vobis, the Post-Synodal Apostolic Exhortation on Priestly Formation. Central to his presentation of celibacy lay the conviction that it is about nothing less than configuration to Christ. It is identification with Christ crucified which is at the heart of celibacy, he said; and this identification with Christ crucified witnesses to our belief that there is value in suffering, austerity and asceticism, especially within a culture which is so imbued with secularism, greed and hedonism. The degree to which Pope St John Paul lived this spirituality is reflected in a very touching observation made by Cardinal Dziwisz, his former Secretary, in his diary of the Pontificate.

Dziwisz says that many who knew John Paul said that, when he beheld a crucifix, he seemed to be speaking directly with the crucified Christ. I’m reminded of this on the day we celebrate Thomas, the Lord inviting Thomas to place his finger in the wounds that were made in his hands; to place his hand in his side. What a Gospel to hold in your heart as you give yourself in celibacy and in ordination through the laying on of hands! Suffice to say, Xavier, hear the invitation which the Lord makes today and every day of your life to place your finger in these wounds, your hand in his side; to doubt no longer but believe.

If I might conclude with a word about charity, pastoral charity. The Rite describes celibacy as ‘both a sign and motive of pastoral charity’; and tells Xavier, ‘You will help the bishop and his body of priests as a minister of the word, of the altar, and of charity’. I find the juxtaposition of word, altar, and charity to be exquisitely expressed in the juxtaposition which the Jesuit Fathers have chosen right here in this church of ambo, altar, and the Homeless Jesus. The Holy Father, Pope Francis, sums this up this juxtaposition beautifully in just in one word: service. ‘The Deacon’, he says, ‘is the custodian of service in the Church, service to the Word, service to the altar, service to the poor.’