Home > Diocese News > Westminster Altar Servers Mass 2019: 'Serving is about serving the poor as well!'
Email to a friendPrintable version

Westminster Altar Servers Mass 2019: 'Serving is about serving the poor as well!' 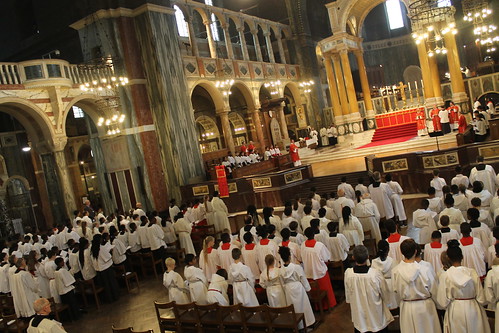 On Saturday 5th October, Bishop Nicholas Hudson presided at the Westminster Diocese Mass for Altar Servers 2019. Altar servers from parishes across the diocese of Westminster were invited to Westminster Cathedral to celebrate a votive Mass of St Stephen.

The Mass was arranged by the Guild of St Stephen, an international organisation of altar servers which was founded in England in 1904. The Guild takes St Stephen as its patron saint as he was a deacon in the early Christian church and was also the first Christian martyr. Bishop Nicholas and the priests celebrating the Mass wore red vestments as a symbol of St Stephen and his martyrdom. As part of the Mass, the altar servers in the congregation renewed the promises they made when they were first enrolled into the Guild of St Stephen.

Bishop Nicholas spoke about the true meaning of service in his homily.

‘Eucharist means thanksgiving. So part of what we’re about in the Mass is giving thanks to God for the great privilege of serving the Mass. Your Holy Patron, St Stephen, was a great servant of the Lord, even to the point of laying down his life for Him. We should ask St Stephen, in this Mass, to pray for each of you that you too might be better and better servants of the Lord.

I began serving when I was just eight. My Dad used to take me on a Wednesday evening to the Sacred Heart church where we learnt by doing it! It’s quite frightening when you start, isn’t it? Frightening but exciting too!

After Mass, we would always meet Fred the beggar outside the church; and Dad would give him a threepenny bit or a sixpence. But he never gave it straight to Fred. He always gave it to me to give to Fred. I realise now he was teaching me an important lesson. He was saying, “Serving isn’t just about serving the Mass; it’s about serving the poor as well!”’

Photos from the Westminster Diocese Mass for Altar Servers 2019 are available here.