The Music of Life 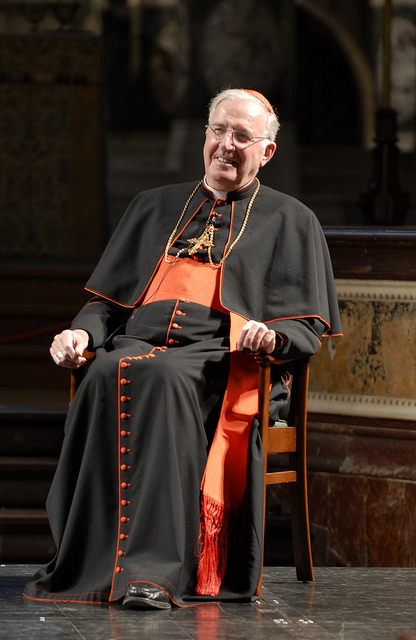 The last time I saw Cardinal Cormac, it was at the Proms. Last year we’d gone to Verdi’s Requiem for the penultimate night; this year he suggested Stephen Hough who was playing Brahms’ First Piano Concerto, passing on the suggestion we might go to the Reformation Day Prom instead. He was plainly frail, but as always the best company. And he was wholly engaged by the concert. Stephen Hough is a wonderful, physical performer – afterwards he had to wipe down the keys – and gave the piece everything. Cardinal Cormac knew him already; indeed he broadcast a conversation with Stephen about piano playing and the music that matters when he guest edited the Radio 4 Today programme; you can still listen to it online.

We descended the stairs to the dressing rooms, painfully, to see Stephen afterwards. The Cardinal asked if he was composing, and it turned out he was: a piece for the British Museum’s launch of Neil MacGregor’s new BBC programme, called Living with the Gods, which would conclude with a Gregorian setting of the Pater Noster. It was rather wonderful to see Cardinal Cormac with a pianist; he talked to him knowledgeably and engagingly, because he was a pianist himself. On our descent, we bumped into the Director of the Proms, David Rickard, who reminded the Cardinal that they had played together at a concert organised by the Guardian editor, Alan Rusbridger, at King’s Place. It was a jolly affair: other participants included Richard Ingrams, former Private Eye editor. I felt rather proud.

For the Cardinal was that wonderful, increasingly rare musical beast: an enthusiastic amateur, a relic of a world in which people would play for themselves and for their friends rather than delegating the task to an expert. It was a world where anyone could do a turn, singing or playing, to add to the gaiety of a social occasion rather than listening passively. It was, of course an Irish thing, but not just Irish.

I saw that generous willingness to have a turn myself when I invited the Cardinal to address the Keys, a group of Catholic writers. He brought the house down when he took a turn at the grand piano at the end. That’s how I shall remember him: at play.