The Life of Westminster Cathedral Choir: What makes a good choir great

Westminster Cathedral Choir, certainly one of the finest choirs in the country and probably the world........ 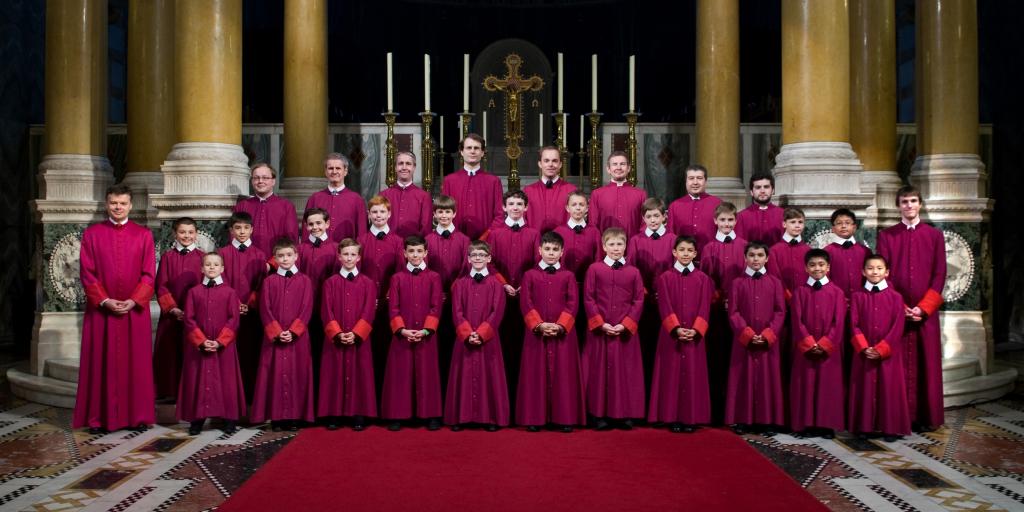 Westminster Cathedral Choir, certainly one of the finest choirs in the country and probably the world, has a reputation that is built on the firm foundation of regular practice.

The 25 boy choristers from the Choir School begin their day with an hour’s practice at 8am and then recommence at 4.30pm, being joined by the professional lay clerks. The choir sings what is known as the capitular liturgy which is daily Mass (weekdays at 5.30pm, weekends at 10.30am) and Vespers daily at 5.00pm and Sundays at 3.30pm. Martin Baker, Master of Music at the Cathedral since 2000, explains that 'the choristers, who board at the Cathedral Choir School, sing both the treble and alto lines, which is unique for a cathedral choir in this country. They are joined by up to 10 professional lay clerks – four basses, four tenors and two counter tenors. One of the defining characteristics of the choir’s sound is that the alto line is a mixture of counter tenors and boys.'

The choir processes into Mass while singing the introit and then divides off on the sanctuary to take its place in the apse, behind and above the high altar. It is out of sight but not out of mind. Martin explains that, 'the Mass isn’t about the choir in the sense of it being a performance. The Mass is about the Mass, so the music we sing is an accompaniment to the liturgical rite which is, of course, in the foreground. Although we can’t be seen the sound rolls down the nave reflecting off the marble of the half domed apse. It’s a great space for singing with no need for any amplification.'

As Master of Music Martin is the one to organize and choose the music for each day: 'I plan the music on a termly basis, and always start with the Graduale Romanum, the official music book of the Church. This has the chant Propers of the Mass - the Introit, Gradual, Alleluia, and so on. Gregorian chant has a different notation from normal music notation with a four line stave and square dots, rather than the usual five. Once the correct chant for each day has been established, I tie in a polyphonic Mass setting and two motets: offertory and communion. It can be quite a musical jigsaw puzzle! The nuances of the liturgical calendar need careful emphasis – the music for a feria will be simple, becoming increasingly elaborate for memorias, feasts and solemnities. The acoustics of the building are a major factor in deciding repertoire. Everyone loves Mozart, but its complex rhythms and short notes do not communicate well in a large space – it comes across as a big blur – so our core repertoire (in keeping with the directions of Sacrosanctum Concilium, the main document of the Second Vatican Council) is the treasury of Renaissance polyphony. Its long, legato lines and slow declamation of text ideally complements the Gregorian Chant and communicates clearly throughout the building.' 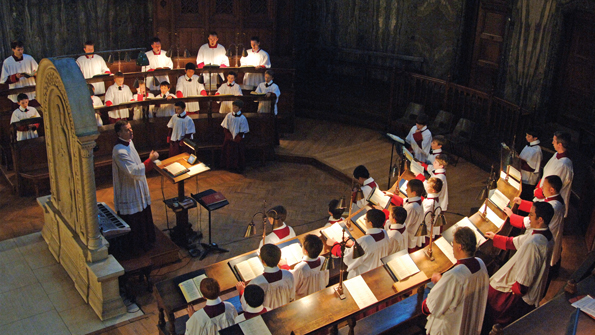 'The Cathedral’s first Master of Music, Sir Richard Terry, was one of the pioneers of the early music movement; in the first two decades of the last century he transcribed hundreds of masses and motets from manuscripts and performed them with the cathedral choir – composers such as Palestrina, Victoria, Tallis, Byrd and Taverner, composers whose music hadn’t been heard for centuries. They were brought to the attention of modern ears through Sir Richard's work, and we continue to build on that today. Commissioning new music has always been a focus for the cathedral choir. Vaughan Williams, Britten and Berkeley, for instance, all wrote music for the cathedral’s liturgy, and most recently James MacMillan, whose spectacular Tu es Petrus for Pope Benedict’s entrance in 2010, combining choir, organ, brass and percussion, was much commented on. All of Macmillan’s music is inspired by his Catholic faith – it defines his music and we are very blessed to have him.'

The high points in the year are clearly Christmas and Holy Week. Martin explains that the choristers usually favour Christmas: 'The music is highly approachable and attractive, full of tinsel and glitter, and young minds respond naturally to this, but I think the music for Holy Week and Easter is infinitely better! The ceremonies at the Cathedral are incredibly powerful and the music plays a key role in enhancing the drama of the movement from Palm Sunday, through the Institution of the Eucharist, to the Crucifixion and finally the Resurrection. The services on Good Friday and Easter morning are the best attended of the whole year – the side chapels are full and the aisles crammed with people standing – but the two Offices of Readings (Good Friday and Holy Saturday at 10am) are my favourites. These meditations on the Passion are formed of psalms sung by the choir in alternation with the congregation, readings, lamentations and the famous Tenebrae Responsories by Victoria. The experience of conducting the Victoria pieces with this choir (and in doing so I bear in mind the choir’s iconic recording made under George Malcolm in the 1950s) is difficult to beat!'

'It is a great privilege to be able to use my musical talents to serve the Catholic Church. Although I spend most of my musical time with the choir, I am first and foremost an organist, and I still enjoy the opportunity of improvising music for the liturgy, often at the Sunday 5.30pm Mass. Of course I don’t claim to be able to approach in quality the music of the great composers, but the immediacy of improvisation – the fact that one is thinking and playing in the present tense, in the moment – make it an ideal accompaniment to the liturgy; one can respond precisely to the moment in the way that a carefully chosen and well-rehearsed piece of music, might not.' 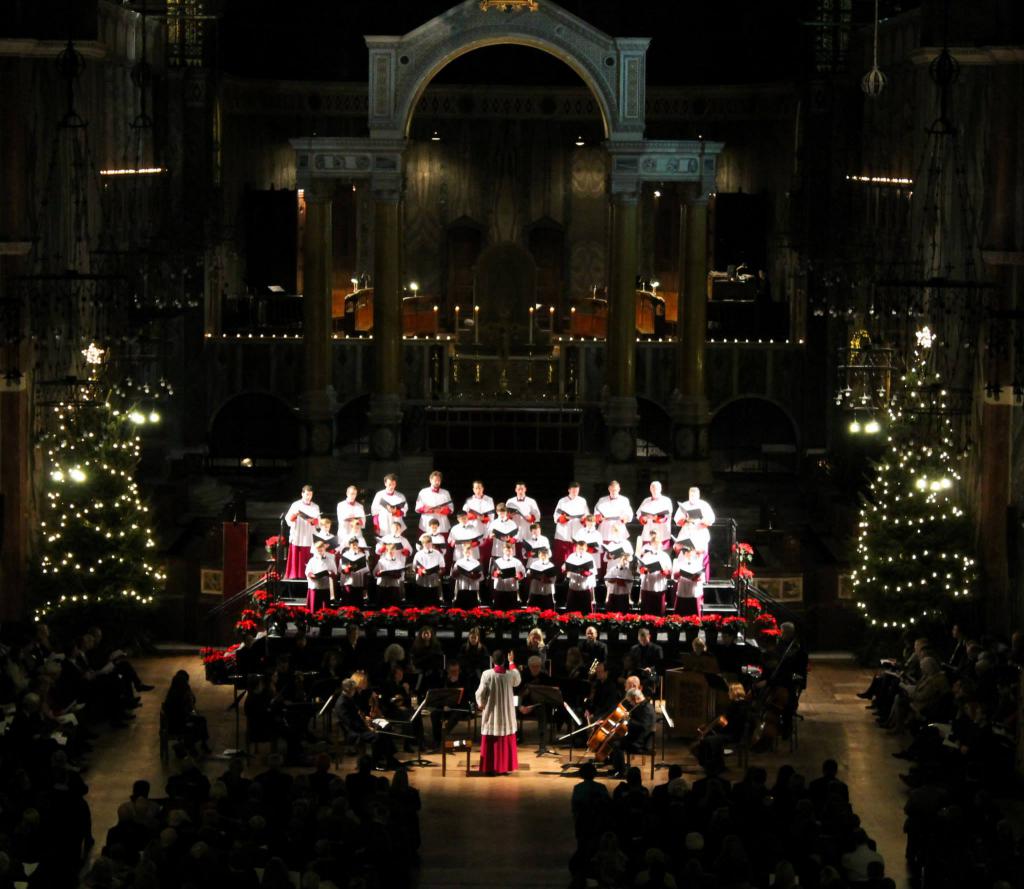 Following on from the success of the choir's most recent album, the 5* reviewed Byrd - The Three Masses, (released with Hyperion and available to buy at the Cathedral Gift Shop) the choir will be giving a concert of music from this CD on July 7 2015 at 7:30pm. Tickets are available online or in person at the Cathedral Gift Shop. Future plans include a performance of the Monteverdi Vespers on November 11 and touring where the schedule permits, including a 3-day chorister tour to Milan in July.

But what makes a good choir great? 'It’s the detail, and the daily hard work which enables us to reach a level where we can sing complicated music with relative ease and know that we have something in reserve for those special occasions that demand it. The choristers come to us aged 8 from a wide range of backgrounds and with a variety of skills, but the routine and discipline of the chorister life-style enables them, in the course of only five years, to morph into young professionals with skills which allow them to work alongside the best adults in the profession. Whether or not they go on to be musicians later in life, they take a valuable lesson with them: that nothing of value is achieved without hard work!'