The Legacy of the English College, Douai 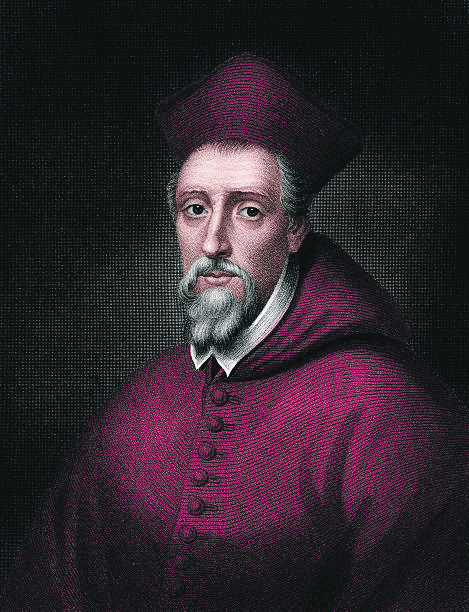 In the first of two articles commemorating the foundation of 450th anniversary of the English College in Douai, Fr Nicholas Schofield, Diocesan Archivist, relates the story of its establishment and some of the developments that have left a lasting legacy.

Little remains today of the English College at Douai, founded 450 years ago this year. The Place Carnot, which stands on the site, is an open space with bus stops, a Domino’s pizza and (perhaps a nod, intended or not, to its English connections) a Brasserie named after St George. One of the few survivals, the tabernacle that once stood in the College church, was restored by the local museum for the 450th anniversary. Elsewhere in the town, there is a shrine to the Douai martyrs in the Collegiate church and the Association William Allen keeps the memory of the Grands Anglais alive.

William Allen, the future cardinal, opened the English College on 29th September 1568. The town seemed a good location for such an enterprise: situated near the Channel, the university had recently received its charter from Philip II of Spain and was already the home to many British Catholic exiles. The college was founded with the help of John Vendeville, regius professor of canon law at Douai and a future bishop of Tournai. Full of evangelical zeal, he had long been interested in the training of priests and his proposals were in part adopted by the Council of Trent, which decreed the foundation of diocesan seminaries across the Catholic world.

That is not to say that the college was founded with this purpose in mind. Initial priorities revolved around uniting the exiles and providing the resources for Catholic scholarship that could no longer be found at Oxford and Cambridge. The Jesuit Fr Persons affirmed that ‘there was no intention at all (as I have often heard Dr Allen affirm) of the end of returning again into their country to teach and preach’. However, it is perhaps natural that the eyes of the exiles should begin to look longingly to the other side of the channel, especially as numbers increased and those who had completed their studies had little to do.

The college thus became a celebrated school and seminary, the first in the Anglophone world, and produced a new type of missionary: the ‘seminary priest’, highly trained in theology and controversy, and eager to return to his homeland, despite the obvious dangers. The first to leave Douai for England was Lewis Barlow, ordained in 1574 and back on English soil the same year. In 1577 Cuthbert Mayne became the first ‘seminary priest’ to be executed. Nearly two-thirds were imprisoned at some point and a total of 116 were executed during Elizabeth’s reign.

The first years of the college were marked by financial difficulties and concerns surrounding security; it proved easy enough for the English authorities to plant spies and this led to the custom of students and staff adopting aliases (sometimes several of them). Further trouble was caused by the fact the Low Countries were a hothouse of religious politics. Indeed, for most of its history the college was affected by the seesaw of European politics and between 1578 and 1593 the college was relocated to Rheims.

What was life like at the English College in the time of Allen? As might be expected, there was daily Mass, weekly reception of Holy Communion, prayer using the method of St Ignatius Loyola and twice weekly fasting for ‘the conversion of England’. The academic syllabus was partly influenced by the Jesuits and included a comprehensive grounding in scholastic theology (particularly that of St Thomas Aquinas) but the course was adapted to suit future missionaries in Protestant England. Much attention was paid to preaching, disputation and the study of Sacred Scripture, the chief ‘weapon’ used by Protestant controversialists. The timetable included daily Scriptural lectures, classes in the Biblical languages, readings from the holy book at meal times and regular debates on disputed points.

The college also sponsored a translation of the New Testament in 1582, made by Gregory Martin, Thomas Worthington, Richard Bristow, John Reynolds and, of course, Allen (all of them Oxford men). The volume included extensive notes and, although it was described as a translation from the Vulgate, use was clearly made of the existing English Bibles of John Wycliffe and Miles Coverdale. The Old Testament followed in 1609-10, which meant the complete ‘Douai-Rheims Bible’ was already available by the time the King James Bible was produced in 1611. Indeed, the New Testament of 1582 was one of the sources used by the translators of the King James. The text was later revised (essentially retranslated) by Bishop Challoner (1749-52) and others, and the Douai-Rheims remained standard among English-speaking Catholics up until the second half of the twentieth century.

The English College, therefore, was not simply a convenient centre for disgruntled exiles but a forward-looking place of education and formation. Its staff included some of the most celebrated minds of the day – not only those who helped translate the Bible but Thomas Stapleton, who Clement VIII thought so highly of that he had his works read to him during dinner. It would leave a lasting legacy on the English Catholic community.