The Church which goes forth 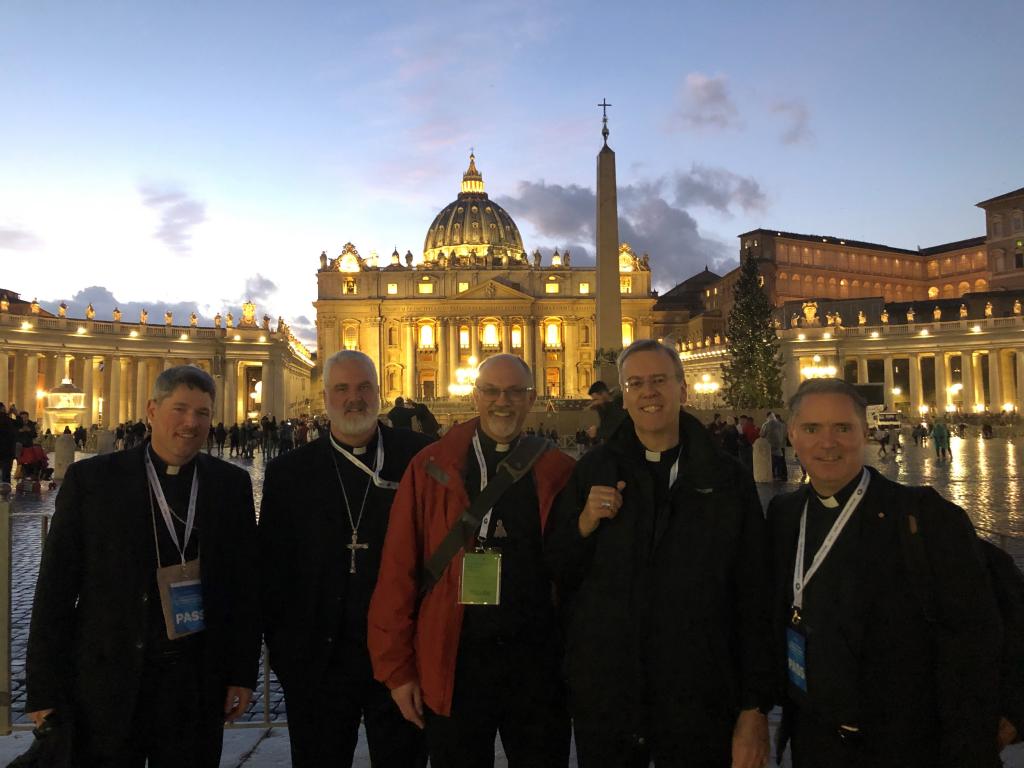 ‘The Church which goes forth.’ It was an inspired name for the international meeting convened in Rome, the last weekend of November 2019, to deepen our perspective on the Pope’s remarkable encyclical Evangelii Gaudium, published six years ago. International it truly was: the 1,300 participants came from Africa, Asia, North America, Latin America and all parts of Europe. International too was the variety of speakers.

‘The best speaker of them all,’ I heard one participant say, ‘was Pope Francis himself’; and I wished heartily to agree. Pope Francis joined us at the end of the meeting; and captured instantly the heart of Evangelii Gaudium when he told us, ‘I would like to say very simply: the joy of the Gospel springs from the encounter with Jesus. It is when we encounter the Lord that we are flooded with that love of which he alone is capable.’ At that point, he went on to say, ‘the need to proclaim the Gospel arises spontaneously and becomes irrepressible.’ What you proclaim is that ‘to live you need the love of God.’

By saying this, he seemed to amplify Cardinal Tagle’s point earlier in the meeting that missionary encounters are an essential part of evangelising.

Cardinal Tagle, Archbishop of Manila and President of Caritas Internationalis, was at pains to remind us that, in order to be evangelisers, we need to be evangelised ourselves. Cardinal Tagle presented the appeal to us to seek missionary encounters through the theme, helpfully, of pilgrimage. All humans, he suggested, are pilgrims on this earth. Pilgrimage speaks of hope. For no pilgrimage is without hope. As Christians, we walk a path trodden with deep hope by generations before us; and what we are called to proclaim is hope in Christ.

This seemed to find an echo the next day in the presentation by Matthew Kelly, founder of Dynamic Catholic. ‘Are we tourists or pilgrims?’ asked Matthew. From the theme of pilgrimage Matthew seemed to be taking us naturally on to the theme of time, to a vision of Church as a stream of pilgrims stretching back and forth across millennia. ‘We could easily think the Church is something we have inherited,’ Matthew suggested, ‘but the truth is the Church is something on loan to us from future generations.’

This time-perspective was affirmed then by the Pope, who pointed out that the first Christians, whom everyone was against and who were persecuted for their faith, should be our guide. We should not be saddened by things that are not going well, said the Holy Father, by struggle, by misunderstanding: they are small things in the face of ‘the sublimity of the knowledge of Christ Jesus Our Lord.’

What unites us, they both seemed to be saying, is that, in every generation, we share the same relationship with the Lord Jesus; and with the Holy Spirit, the Spirit whom, the Pope reminded us, we should invoke every day, as has every generation before us, and ask him to help us ‘to make (of our) life a love story with God.’ Communicating that loving relationship with God is the essence of what we are about.

Two other themes will stay with me. The first is tenderness, the ‘Revolution of Tenderness’, God’s tender loving mercy which is one of the keys to this pontificate. My perspective on this was deepened through attendance of a fine workshop on the theme led by Fr Gerry Whelan SJ of the Gregorian University. We heard there how Pope Francis had recently described the cross as the seal of divine tenderness. This was explained as the way Christ gives himself for us on Calvary in spite of our hurting him. This extra-ordinary generosity of Christ’s is amplified by his tender preaching that it is the poorest and most vulnerable for whom we should make a place at the heart of our communities.

Pope Francis seemed to affirm this when he told us, ‘Our poverties are not obstacles but precious instruments because God’s grace loves to manifest itself in weakness.’ I heard in this a deep affirmation of the reality that it is when we give centre stage to the poorest, the weakest, most especially those who have a disability, then we are effecting a Revolution of Tenderness. For, as St Paul put it, ‘God has chosen what is foolish in the eyes of the world to confound the wise.’ (1 Cor 1:27). That is the revolution. I heard here also a word of encouragement: encouragement to believe that, even if we feel too poor ourselves, that we lack the resources to give centre stage to the poorest, God will use our weakness to make us strong in bearing witness to him (cf 2 Cor 12:9).

The second and last theme: culture or, better, inculturation. This insight was a further gift of Cardinal Tagle. Everyone is part of a culture, he told us: we tell our stories in culturally different ways; popular piety is inculturation; it shows how faith is passed on within a culture. Jesus breached cultural limits in order to proclaim mercy: to touch the diseased, to call God ‘Abba’, to wash disciples’ feet. Cardinal Tagle developed the point to say there are a number of cultures with which we need to walk, cultures we need literally to accompany, in order to evangelise them: the cultures of indigenous peoples; the culture of the digital revolution; the cultures of People with Disabilities, who require us to learn a new language and increased sensibilities; the culture of forced migration. On this last point, he suggested that to walk with migrants requires learning from a different culture because it requires us to identify with the stranger. His conclusion was deep: the arrival of the Gospel was a cultural event but, of its nature, culture-breaching; the call to us as Church in the 21st century is to be both culture-steeped and culture-breaching.

I came away from Rome feeling re-enthused for the vision of Evangelii Gaudium and with a deepened sense that ours is a Church which must indeed ‘go forth’. Key words of Cardinal Bergoglio on the eve of his election as Pope Francis were often cited. They are words which capture the essence of the meeting; and which will resonate all the more deeply now, I believe, in the hearts and minds of all who shared in this memorable conference: ‘When the Church does not go out of herself to evangelise, she becomes self-referential.’ What we are called to be, this meeting was at pains to communicate, is anything but self-referential, anything but.