Pope Francis to young people: You are priceless 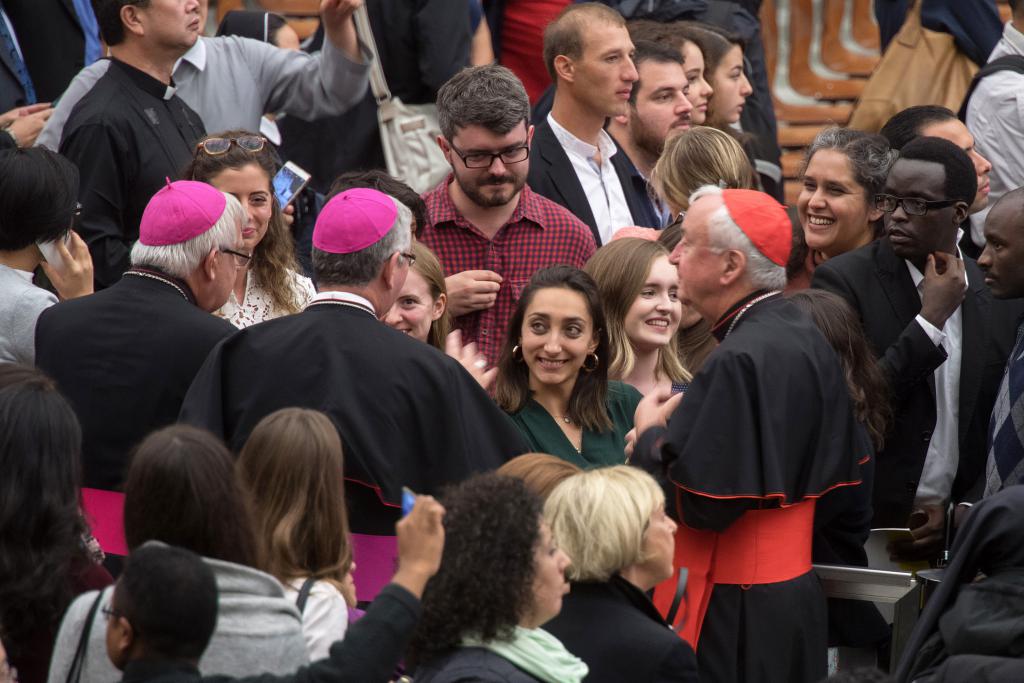 When I received a WhatsApp message asking if ‘you want to go to Rome and see the Pope’, initially I thought no; I would have to fly out at short notice, find accommodation and pay for it all. Then I came to my senses and quickly retracted my initial answer! I was lucky enough to be offered tickets and lucky enough to be able to afford flights and accommodation for the weekend.

The Pope, after the pre-synod meetings, thought it was important that the Synod Fathers also heard the voices and experiences of young people to aid them in their discussions. He invited young people to the Vatican for an evening meeting with him on 6th October and the Synod Fathers called ‘NOI PER – Unici, solidali, creativi,’ roughly translated as WE ARE FOR: uniqueness, solidarity and creativity.

Before I left, people kept asking me if I was excited and my honest answer was ‘yeah, kind of’, which continued until Saturday afternoon. When I gave the address to the taxi driver and he said ‘that’s in the Vatican’, to my great joy I was able to say ‘YES! I am going in the Vatican!’

From that moment when I exited the taxi and joined loads of excited young people in the security queue I was full of anticipation which soon turned to confusion when I realised I had to find the rest of my group. Our organiser, Theresa Carvalho (Home Mission Officer at the Bishops’ Conference), had managed to get seats all in a row, but I had difficulties navigating the hall and explaining to the stewards that I wanted to sit in a different section, and, quite honestly, finding my friends in a sea of other young people who were all waving at each other. Our seats were near the main aisle, where we were sure the Pope was going to walk.

About an hour before the event the Synod Fathers began to arrive, greeted with cheers. We began to question our own knowledge of Cardinals before realising that no one really knew who they were; we were just happy to see them. It was a good start to the event, I think, for the Synod Fathers to know that we were glad they were here to listen to us, to understand our problems and most importantly recognise that the work of the Synod should not be distanced from young people! The whole atmosphere felt like a gig or a festival. Chants of ‘Papa Francesco’ echoed through the crowd, people jostled to get to the barrier. Fortunately, being 5’0” meant no one begrudged me a space at the front.

With two minutes to go, a fanfare played and the Pope entered. Disregarding any dignity, we may have had, we all crammed along the barriers desperate to see or touch the Holy Father as he walked down the ‘catwalk’ to his seat. It was quite overwhelming to see him walk past, to be able to reach out and touch him. (I have the holiest hand in North London now.)

Once he was seated, the event began with a dance performance. Throughout the evening we heard testimonies from young people interspersed with a range of musical performances, hosted by what we can assume was a charismatic host. We were listening to the English translation through the Vatican Audio app which meant that some of the finer points of his chat were lost. After the testimonies, the young people on the stage read out a list of questions that they wanted to ask the Synod Fathers, ranging from questions of migration to deeper questions on discernment. I certainly felt they were all things that I had thought about before and was happy they we being brought forward by others.

The translators informed us that the Holy Father did have a prepared address that he chose not to read, instead responding directly to the questions raised by the young people. This again showed us that we were being taken seriously, and that our voices were not being ignored and passed over but merited a response from the Hoy Father himself. He was keen to acknowledge however that the answers would come from the Synod Fathers.

In his address he focused on the importance of finding a concrete path, one that was consistent with firm roots. This can be achieved, he said, through learning from the Beatitudes. We should also be sure that when we are looking forward, we are looking at the horizon and not in the mirror.

I would like to quote more extensively from the speech, but it was an off-the-cuff response to us and is not available in English yet. One thing that has stuck with me is something that he made us repeat back to him. He told us we are priceless. This is a direct contrast to the demanding commercial culture that many of us live in. To be told we are priceless, that we should not allow ourselves to be bought and sold is a powerful counter to the rhetoric of modern society that we are worth what we are paid and nothing more. He urged a rejection of this, of populism, and everything that brings us away from our concrete paths. In doing this, for me, he came to the heart of why so many people are willing to engage with this Synod: because we know the Church can offer us this concreteness, this consistency and means to build the foundations of a Christian life.