St Philip the Apostle, Finchley: A centenary year of celebration 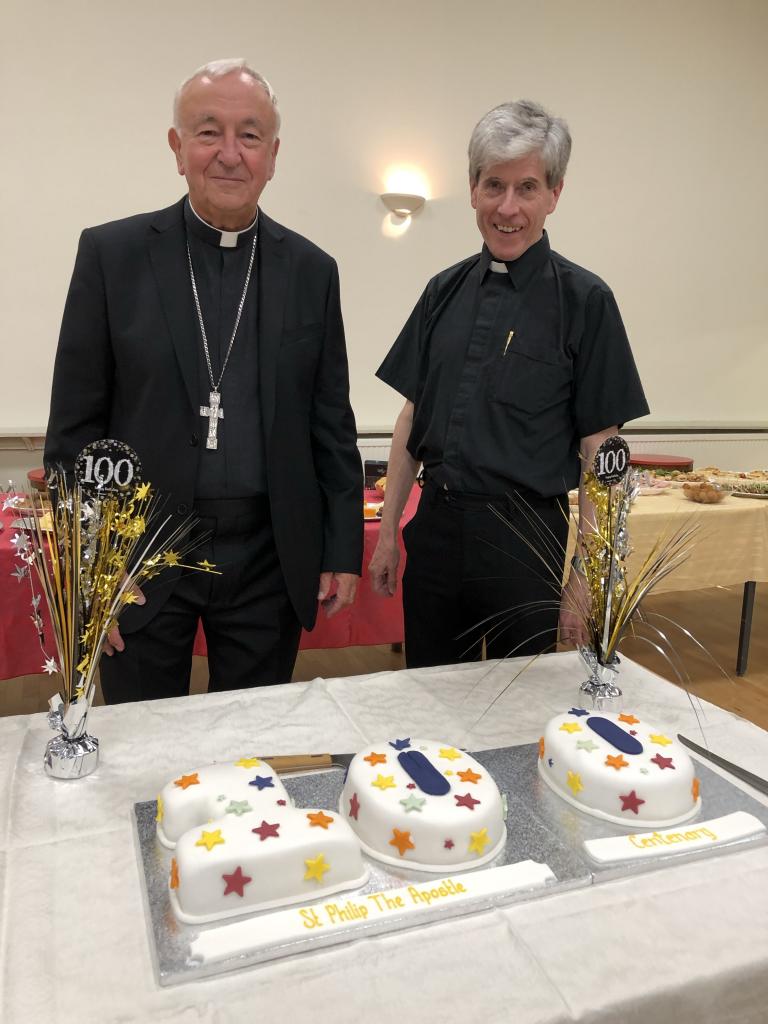 Saturday 14th September 2019 marked one hundred years since the founding and first Mass of a new parish in Finchley which would become the Church of St Philip the Apostle. The parish was founded at the instruction of Cardinal Bourne in July 1919 during a visit to the new Convent of the Sisters of Marie Auxiliatrice. The sisters agreed to their chapel being used as the temporary church and the convent chaplain Fr James O’Rafferty was appointed Parish Priest. In 1925, Derwent House and its grounds were bought as the site for the new church. The new chapel in Derwent House was blessed on 2nd September 1925 and the first Mass was celebrated on 4th September. On Sunday 8th November 1925 Cardinal Bourne blessed the building and inaugurated the Church of St Philip the Apostle. The first turf for the new church was cut by Fr Hogan in 1932. On 10th February 1933 the foundation stone was laid and the church was completed in May 1933. The building was extended in 1960 and was consecrated on 3rd May 1975, the parish’s patronal feast, by Bishop Gerald Mahon.

Since 2006, St Philip’s has welcomed the Polish community with the Sunday evening Masses celebrated in Polish. Three priests have undertaken this ministry, Fr Krzysztof Kawczynski 2006-2011, Fr Roman Kowalski 2011-2018 and Fr Marek Gałuszka since 2018.

The parishioners of St Philip the Apostle marked their centenary year with a series of celebratory events throughout 2019. The planning for the centenary started in September 2018 and it was agreed that any funds raised from the celebrations would be donated to St Theresa’s Catholic Primary School. The celebrations began in January 2019 with a Race Night. In February, the Polish community organised a Polish Evening with entertainment, dancing and a delicious buffet supper. A Parish Retreat day took place in April, with input from guest speaker Bishop John Crowley. Bishop John took as his theme the words of St Philip in the Gospel and their relevance for Christians today. In April and June, there were opportunities for parishioners to attend a special guided tour of the Manor House Convent, the first home of the parish. The convent was sold in 1980 and is now part of the Jewish Sternberg Centre.

In May, the parish celebrated its patronal feast of St Philip the Apostle with a variety show and buffet supper. Talented parishioners performed musical items from each decade of the past 100 years. Later in May, parishioners attended a walk organised by a local expert on ‘Hidden Finchley’, with a slide show ten days before as a taster session.

On the last weekend of June, the church was beautifully decorated for a Flower Festival. Each display represented a significant event from one decade of the history of the parish.

A souvenir booklet with a self-guided tour was produced for visitors and a display of the parish’s history was exhibited in the Weekday Chapel. The festival was attended by the Sisters of Marie Auxiliatrice who moved from the parish in 1991. On the Saturday afternoon a strawberry tea was held in the parish centre.

For younger parishioners, a children’s picnic and games afternoon took place after the Family Mass on Sunday 14th July in the gardens of Stephens House on East End Road. For senior members of the community, one parishioner hosted a special tea party in their garden on the August Bank Holiday Monday.

The highlight of the year was the Centenary Mass on Saturday 14th September, the actual centenary day. The principal celebrant was Cardinal Vincent. The Mass was concelebrated by Fr John Dermody, Fr Alexander Master, Fr Marek Gałuszka, Monsignor John Conneely, Fr Gerard Balinnya, Fr Kevin Ryan SX, Fr Carlo Bonelli IMC, Fr Ray Armstrong CM, with Deacon Anthony Clark serving. An adult and children’s choir led the singing in a packed church and the Sisters of Marie Auxiliatrice proclaimed the readings and bidding prayers. In his homily, the Cardinal focused on one word from each of the three readings, ‘remember’, ‘rejoice’ and ‘serve’, and urged us to do all of these. At the end of the Mass the Polish community presented Fr John with an altar crucifix. This was followed by a reception in the parish centre where Cardinal Vincent cut the centenary cake. The Mass was also attended by the Deputy Lieutenant and the Deputy Mayor of the London Borough of Barnet, and the MP for Finchley and Golders Green.

In October, the parish’s Justice and Peace group organised the annual International Food Fair, an evening of food from many countries, all prepared by talented parishioners. The final event of the centenary celebrations took place in November with a concert of sacred music performed by the parish choir. The musical programme was varied and included the African Gloria, Irish Blessing, Jesu Joy of Man’s Desiring and Lead Kindly Light.

To commemorate the Jubilee, two parishioners produced a souvenir booklet detailing the history of the parish, with contributions from many parishioners. Copies may be obtained from the parish.