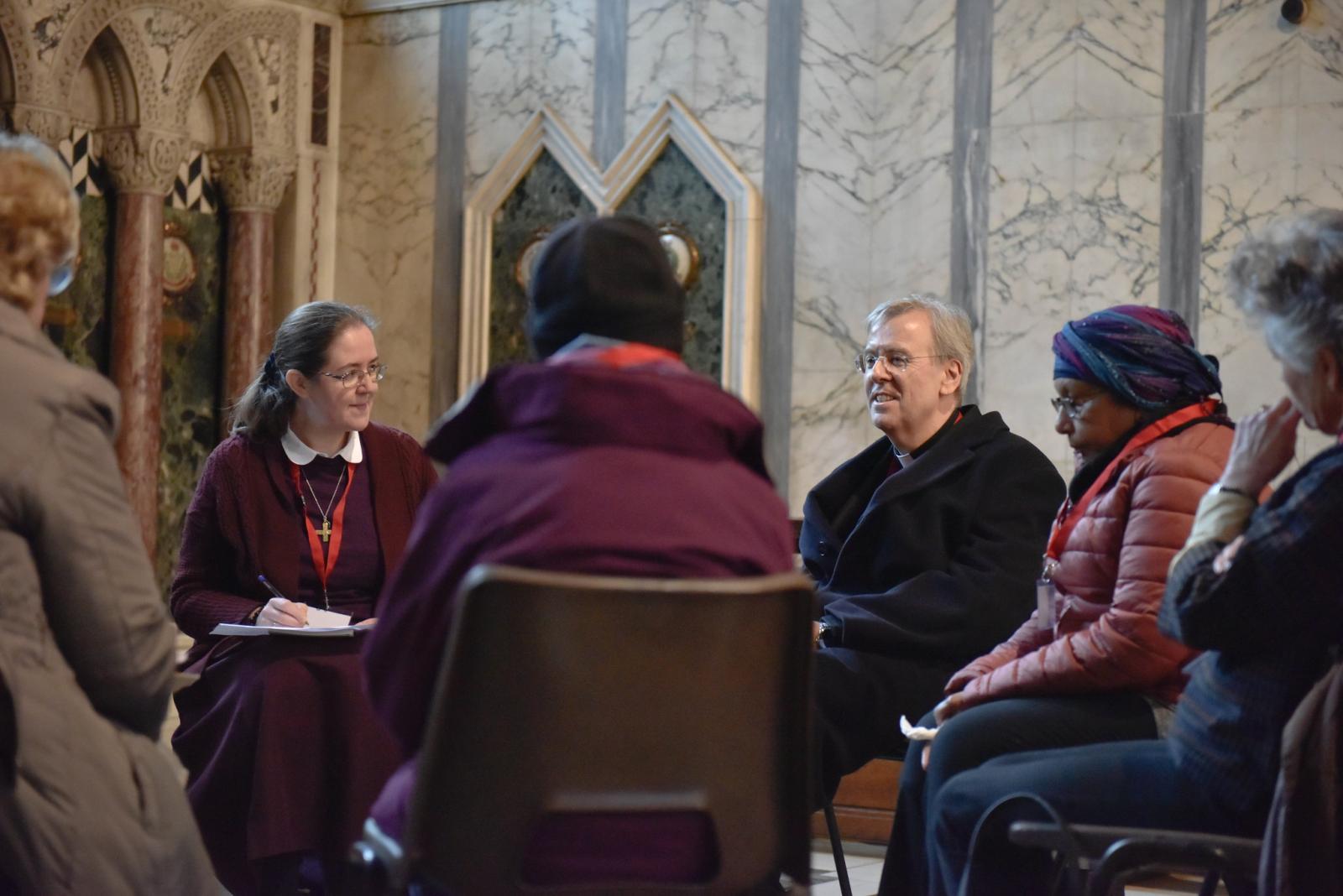 On a windy Saturday 19th February nearly 200 people from more than 90 parishes and 20 schools, as well as representatives from other communities braved the weather to gather in Westminster Cathedral to hear the summary of findings from the listening events that took place all around the diocese in November and December that launched the synodal pathway. Many could not be present on the day as transport was disrupted in the aftermath of Storm Eunice.

Bishop Nicholas Hudson opened proceedings by explaining that 'although a great deal has been achieved already, it really is only a beginning' and that 'the work we’ve done up to this point will now move forward in two directions'.

The diocesan report would be sent to the Bishops' Conference, who will collect the findings from all dioceses in England and Wales. This report would in turn contribute to the submission to be prepared by the Bishops of Europe, which in turn will form part of the discussion at the World Synod in Rome in 2023.

Additionally, he added, 'we shall seek to capture for ourselves what the Spirit is saying to us as a diocese, by coming together at the end of 2022 or the beginning of 2023 for a diocesan gathering where we will review our priorities for evangelization, informed by all that we have collected from the synodal process thus far.'

He thanked Danny Curtin for the work he had done to facilitate the process thus far, handing over to him to share the feedback from the listening process with the assembly.

The report dealt with responses by the faithful in a number of areas, which included the response to synodality and what it means to be asked to contribute to the life of the Church in this way. There were positive experiences of life in the Church, as well as sadness about those who were missing from the Church.

The responses emphasised the importance of accompanying each other and listening to the voice of the Holy Spirit, so as to accompany one another as we journey together.

The presentation of the findings was followed by small group discussions, whose responses were shared with the wider assembly.

The Cardinal then summed up the responses and reflected on what was said that day. He explained that, for him, there were four themes.

The first was a golden thread that has emerged from this process of a deep love for the Church. 'It is utterly central to how we go forward together,' he said. 'Only this love of the Lord and of the Church can keep us together and responsive to each other, and to the Holy Spirit.'

The second theme was the 'great sensitivity towards those people and ventures who are "missing", who feel left out or distanced'. He acknowledged that, while there is provision for them, 'these aspects of our life together are not well-known and they are certainly not embedded in the entire life of the diocese,' that 'there is much to do,' and, 'there is experience and achievements to help us to do so.'

He spoke of the desire to listen to each other, but that there are 'many other voices that we hear and listen to', that there is an opportunity to learn from these voices, but that 'we want to do it in a way that points to the person of Jesus as our model and our grace.'

And, finally, he pointed to the day's Gospel reading about the Transfiguration, which teaches us that Jesus is the source of all we are and do.

The day concluded with a Liturgy of the Word. Preaching on the the Gospel Reading of the feeding of the multitude, the Cardinal noted that St John 'addresses the seeming impossibility of the mission given to the Church by Jesus.' Like the small boy whose resources are sufficient to feed a great multitude, 'this great sign and demonstration of God's faithfulness' shows that, while we have so little, 'we are granted so much!' This, he said, enables us to resolve to be as faithful as possible to that invitation, to that mission.'

The Cardinal and Bishop Nicholas both expressed their gratitude to the Agency for Evangelization and the team guiding the synodal process in our diocese. Thanks are also due to all the priests, teachers, volunteers and participants in listening events who have responded so generously in accompanying each other on the synodal journey thus far.