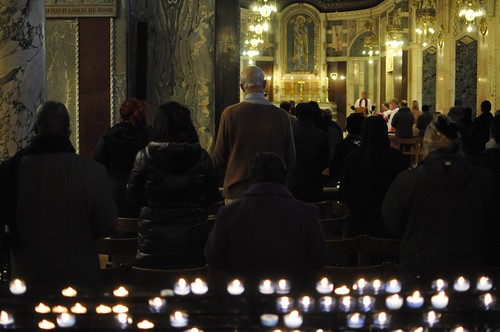 Between 7pm and 8pm throughout the Diocese of Westminster, churches undertook a Holy Hour to give thanks for the Papacy of Pope Benedict XVI.  Archbishop Nichols’ asked parishes in the diocese to pray for the Holy Father as he begins to serve in a new way, as a simple worker in the Lord's Vineyard, and to offer prayers for the election of a new Pope.

In Westminster Cathedral an hour of adoration and prayer was held led by Fr Alexander Master, the Sub Administrator of the Cathedral. Fr Alexander reflected upon previous homilies given by the Holy Father during his papacy.

Prior to the Holy Hour, Bishop John Arnold celebrated Mass at the Cathedral and highlighted how “No one thought a month ago they would be celebrating the retirement of the Holy Father.” Bishop John praised Pope Benedict’s legacy speaking of the universal admiration “for the immense energy, dedication and conscientious work that he has given to the Church.”

Over the next few days all the Cardinals will meet in the General Congregations and decide when to convene conclave, in which those Cardinals who are under 80 will be eligable to vote.