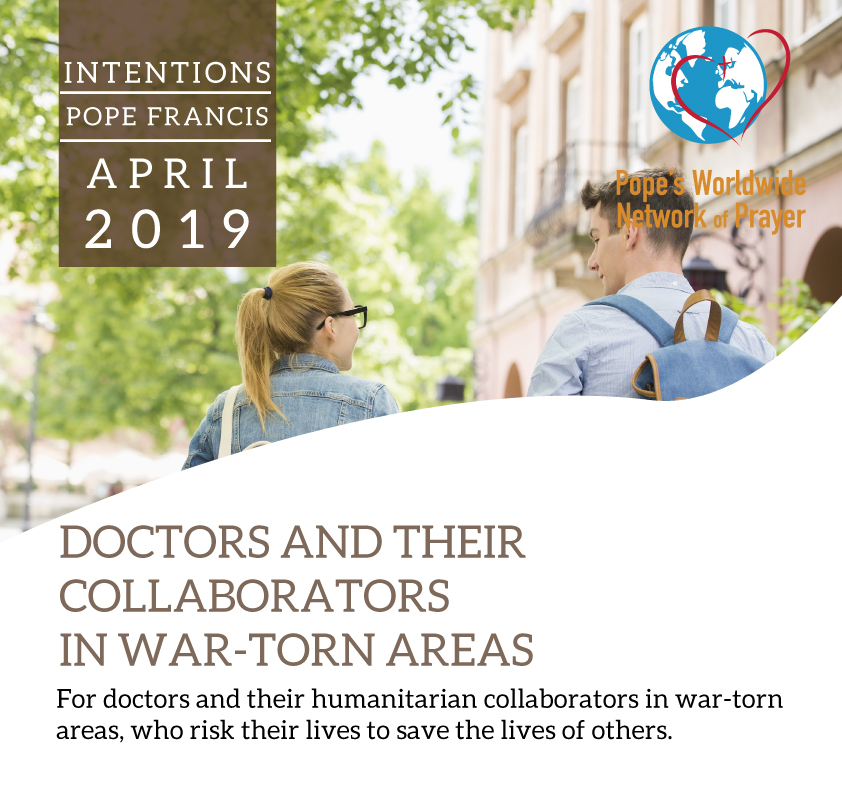 Among the many intentions and desires we will bring to our prayer and liturgies in April, the Holy Father invites us to consider also what is in his heart, and in his prayers, this month. This year it’s the month that brings us Palm Sunday, Holy Week and Good Friday, then the bright triumph of absolute good over evil’s darkness on Easter Day. In this month, Pope Francis invites us to pray for a particularly heroic and brave group: doctors and their humanitarian collaborators in war Zones, who risk their lives to save the lives of others. They labour in so many situations of darkness. He shares this, his universal Intention for this month, so that we might hold these courageous and generous professionals in our prayer too, thanking God for them and for the selfless good that they do; a powerful story that is, perhaps, not always told as it might be.

Here in the constituent nations of the UK we are blessed to have the widely-admired humanitarian and development agencies CAFOD (Catholic Fund for Overseas Development) in England and Wales, and SCIAF (Scottish Catholic International Aid Fund) in Scotland. Each is the official agency for the Episcopal Conference in those nations. In Ireland, Trócaire carries out a similar mission. In the Jesuit world, we have Jesuit Missions and the wonderful Jesuit Refugee Service (JRS) founded by Fr Pedro Arrupe SJ, General of the Society from 1965 to 1983. Earlier in his Jesuit life, Fr Arrupe had received medical training, which he famously applied ministering in a place of war, to the survivors among the 200,000 victims of the Hiroshima atomic bomb. He was there when it exploded. Originally, like Ignatius, from the Basque Country of Spain, Fr Arrupe had been missioned to Japan; he was briefly imprisoned at the war’s outbreak and later became Japan’s Jesuit Provincial. At the beginning of this year, we received the good news that Fr Arrupe is now on the road to sainthood, the cause for his canonisation having officially begun with his naming as a Servant of God.

One of the best-known medical organisations operating in war-zones in our time is the international agency Médecins sans Frontières (Doctors without Borders). Founded in Paris in 1971, following the war and humanitarian disaster in Biafra, they work to provide medical assistance to people affected by conflict, epidemics, disasters, or exclusion from healthcare. Their mission is to remain impartial and neutral, guided by medical ethics and by the demands of justice. Their work goes beyond immediate disaster relief, frequently asking why so-called ‘third world’ counties receive only third-rate medical services.

In our annual Pope’s Prayer Network Living Prayer booklet for 2019, we have a reflection from one of our Dublin colleagues on this month’s Intention. Patrick Muldoon, of the Jesuit Communication Centre, writes about how Pope Francis, commenting on the world’s present instability, emphasised how war and the threat of war is causing increased hunger. Humanitarian assistance projects are being frustrated because ‘arms have gained unprecedented importance, eliminating other ways of resolving [these] issues’. The Pope said that this approach ‘is so deeply ingrained and taken for granted that it prevents food supplies from being distributed in war zones, in violation of the most fundamental and age-old principles and rules of international law’. The Pope offered a prayer for us to say, reprinted below.

Most of us would recognise the temptation to ‘walk by on the other side’ when faced with suffering in another person, or on the larger scale the suffering of brothers and sisters in the Majority World. The people for whom the Holy Father invites us to pray this month do not yield to that temptation although, being human, they will experience it too. These medical professionals and humanitarian workers do, every day, in the words of this month’s Intention, ‘risk their lives to save the lives of others’; if they don’t, who will? What, therefore, does it mean to pray for them? First, this might be to pray in thanks for them. And since our prayer must not be mere empty words, we might realise also that it should move us to action, should mobilise us: what can we actually do about this challenge to humanity? Why do doctors and humanitarian collaborators have to risk their lives in war-zones? We don’t want to hide behind prayers and piety but we do want to discern what needs to be done. Pope Francis so often calls for us to be a discerning church. A precondition of good discernment is to become as fully informed as we can. In praying this intention this month, with Pope Francis, we commit our hearts to that discernment, that informed listening, that breaks open for us the mission to which the Spirit of God calls each of us, no matter where we find ourselves in this hurting and unstable world.

A suggested Morning Offering prayer, from the Living Prayer 2019 booklet:

Merciful Father, I thank you for your presence in my life and your immense love. May my heart become more like the heart of Jesus and may this union of hearts be reflected in the way I interact with my colleagues, my family, friends and strangers. I offer you my day, in union with the Heart of Jesus, for the Church and the intentions of the Holy Father. Our Father …

Pope Francis’s Prayer: May the Lord help all the little ones and the poor of our world to continue to believe and trust that the Kingdom of God is at hand, in our midst, and is ‘justice, peace and joy in the Holy Spirit’ (Rom.14:17. May He sustain all those how, day by day, strive to combat evil with good, with words and deeds of fraternity, respect, encounter and solidarity. We ask all this in the power of the crucified and risen Lord. Amen.

THREE CHALLENGES for this month:

Log on to our website www.click-to-pray.org or download the latest version of the app (on App Store, iTunes and Google Play) to pray with the Pope, and hundreds of thousands of Christians around the world. This app connects you with all who pray with the Pope in a quick, easy and creative way. Each day, the app offers a different set of short and accessible prayers including a fresh Morning Offering for each day. There’s a Prayer Wall on which you can post intentions, anonymously if you wish, for others to pray with you. Click to pray each morning and make this world better each day!