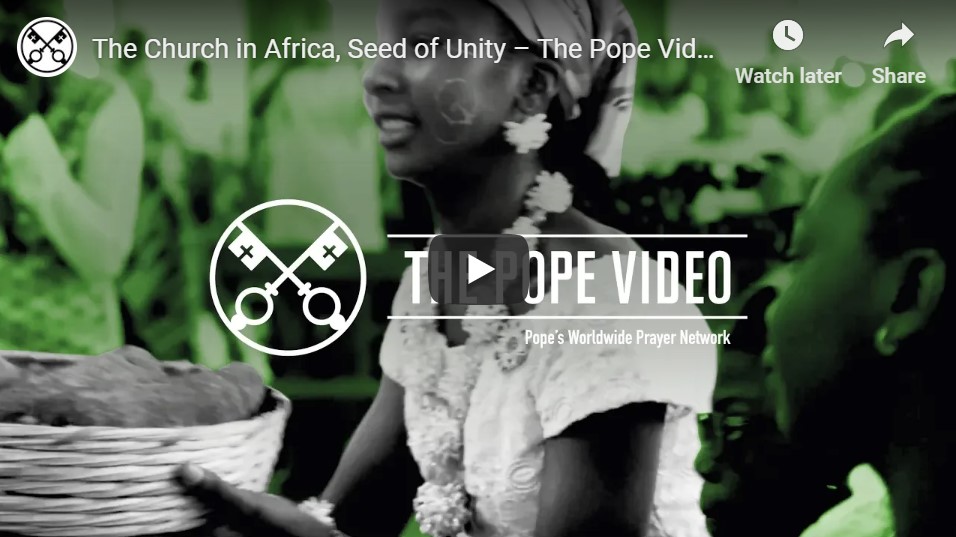 In this May-time, we have continued to celebrate the Lord’s Resurrection and we will conclude the month with his Ascension, which of course brings us his absolute promise to remain with us in a new, original way. In our northern hemisphere the warmer, longer days of spring have duly arrived; blossoms and new crops flourish although our concern about what we are doing to our common home, our planet, are more vividly present than ever. Pope Francis directs our attention, in this month’s Intention, south of the Equator, asking us to pray with him for the challenges facing the Church’s mission there. His Evangelisation Intention for this month is ‘that the Church in Africa, through the commitment of its members, may be the seed of unity among her peoples and a sign of hope for this continent’.

Nobody of good will would have failed to be astonished at the Pope’s powerful appeal, just before Holy Week, to the leaders of the divided land of Sudan. They had been at the Vatican for a retreat that was focused on healing the divisions and ending the violence in that blood-soaked land. Over 400,000 have died violently in civil wars which produced the continent’s worst refugee crisis since the Rwandan genocide of 1994. Christianity is, not least in the Cross of Jesus, a sign of contradiction but here was an example for those leaders (and for all of us) of another kind of paradox. Christians and our churches, sadly, remain disunited but here was a counter-sign as no less than the Anglican Archbishop of Canterbury had assisted in guiding this retreat.

At the final meeting, Pope Francis, appealing as ever for dialogue, did something extraordinary. Always adept at the telling gesture, Francis spontaneously went to each of the leaders, knelt before each of them and kissed their feet in supplication. Reporters present were astonished by this gesture of an elderly man, who has chronic pain in his knees and hip and who functions with only one lung. This was no empty gesture; it was a powerful plea for unity among the African peoples, expressing the sentiment of this month’s Intention. We pray with the Holy Father that this might be, as the Intention says, a sign of hope.

Pope Francis has gone to Africa several times since his first visit in November 2015. The Majority World, the global south, has been a focus of his apostolic journeys. But he does not go to proselytise, to convert. On his most recent visit, to the predominantly Muslim country of Morocco, he, the pontiff asked Catholics to avoid trying to convert people, saying this: ‘always leads to an impasse’. Such an impasse would prevent dialogue. ‘Please, no proselytising,’ he told the congregation at Rabat's cathedral. The next day, he provided a concrete example of the reason why. The Pope met migrants at a centre run by the Catholic humanitarian organisation Caritas. ‘The issue of migration will never be resolved by raising barriers,’ he said in a speech. Once again, he is hoping and praying that the Church may be that ‘seed of unity’ rather than a proselytising competitor among religions vying for the allegiance of people.

Our Prayer Network, formerly known as the Apostleship of Prayer, has developed an online prayer facility which helps you to make each day different: we call it Click-to-Pray. This network, the biggest in the Church, allows millions of people around the world to pray with the Pope for the challenges that face humanity and the Church’s mission, such as this month’s Intention. Digital means are essential in our time for spreading this message: Click-to-Pray is now the Pope’s third official digital platform along with his social media presence. Download the to your smartphone or your tablet and pray with the Pope! It is fitting, therefore, that our thee challenges, or proposals, for this month include making good use of the internet.

THREE CHALLENGES FOR THE MONTH AHEAD:
1: Do some research online; look for good examples of reconciliation between people and groups separated by war or religion, especially on the African continent and spread them in your own social media networks.

2: Make a deliberate resolution to look for opportunities, in the family, at school and at work, to be an agent of peace and reconciliation, taking on this task as a way of evangelisation because this is how to evangelise without proselytisation.

3: Promote, in your parish or other worshipping community, a moment of prayer, praying that the Lord will heal the wounds of war and the division of the African peoples and open paths of reconciliation.

PRAYER MOMENT:
As St Ignatius of Loyola always recommended, when we take some time to pray, we should always begin by pausing to become aware of God’s gaze upon us: God already looking at us, beholding us, wanting to share God’s own being with us. At this time in particular we can remind ourselves of the risen Christ’s joy and glory and the Trinity’s desire always to be with us, inviting us to participation in that glory.

A suggested spoken prayer this month has been prepared for the worldwide Prayer Network, which you might like to meditate with:

God of kindness, you created your children to live united to you, in communion with one another. In this month of May, with Pope Francis and all of us in his personal prayer network, we pray to you for the Christians of Africa, so that they open themselves to your presence and to your reconciling action in the midst of the divisions of this world. May your grace move hearts to forgiveness and mercy, with a sincere desire for that dialogue that builds peace and nurtures hope in the future, in particular of the poorest and the young.

DOWNLOADS and FURTHER ACTIVITIES:
• The latest version of our Click-to-Pray website (www.clicktopray.org) and app contain new features for your daily prayer, beginning with the Morning Offering where we offer our day to the Heart of Christ, in union with the Holy Father and the whole people of God.
• Each month we produce the Pope Video in which the Holy Father personally presents his Intention, appealing to us to join him in prayer. Watch it at www.popevideo.org and share it on your own social media accounts.
• Prayer cards and leaflets about the Pope’s Prayer Network can be sent out on application to the London office by emailing prayernetwork@jesuit.org.uk or by leaving a voicemail on 02084425232.
• If your parish or chaplaincy would like to know more about the Pope’s Network, or commit to prayer for his Intentions each month, contact the office and we’ll offer support.
• Say a prayer for the whole Network on the Feast of the Sacred Heart next month (June) as we celebrate, in Rome, with the Holy Father, our 175th anniversary! The next day we will celebrate, with the Jesuit Superior-General Fr Arturo Sosa SJ, a Mass of Thanksgiving at the Basilica of St John Lateran. There will also be a one-day guided walking Ignatian pilgrimage around central Rome. Tickets for the special Audience with the Pope have all been taken up but, if you’re in Rome then or are thinking about a last-minute pilgrimage, call the office to see if any tickets have been returned.