A stunning exhibition of inspirational art by Expressionist artist Stephen B Whatley. 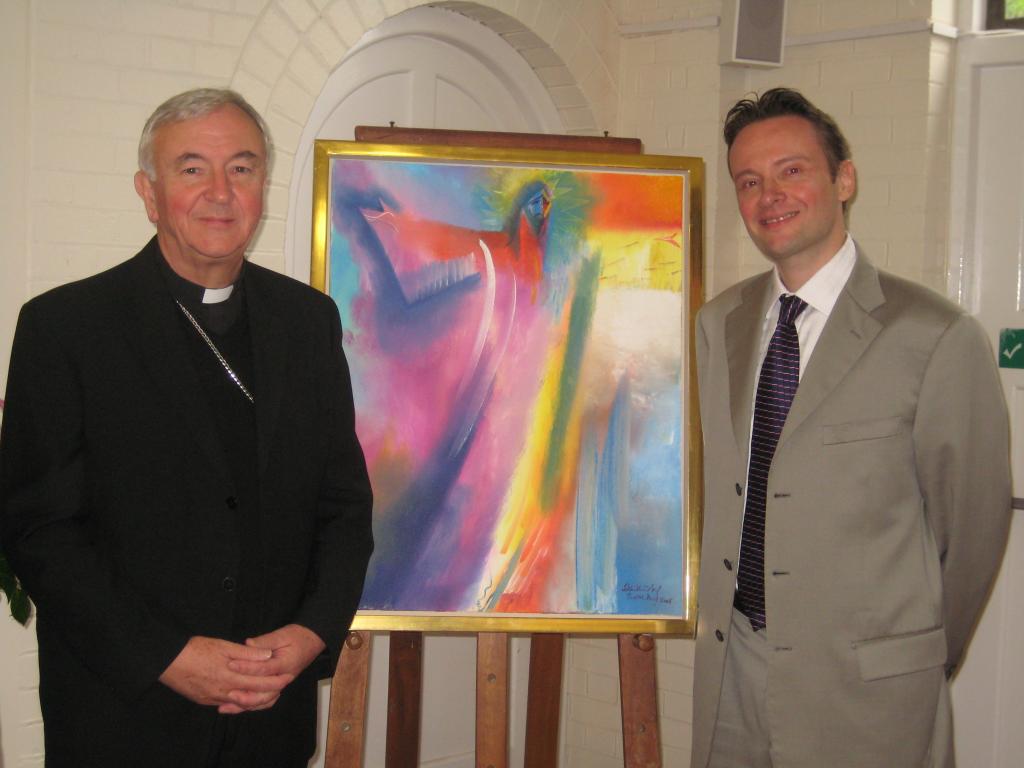 A stunning exhibition of inspirational art by Expressionist artist Stephen B Whatley.

A unique opportunity to view Christian art by Stephen B Whatley, noted for his portraits of celebrities such as Dame Judi Dench and Sian Phillips and pictures of London such as those in the Royal Collection at the Tower of London, Buckingham Palace and BBC Heritage. The artist's expressionist oil paintings are in numerous private collections in this country and overseas

The artist paints vibrantly in an explosion of light and colour. Each work is the product of prayer and a revelation of spiritual intensity. Exhibited are pictures of Christ ,Our Lady and the Saints. A highlight is a new tribute portrait of Pope Francis to be viewed for the first time at the opening of the exhibition. The paintings will be displayed in the chapels of St Patrick and St Andrew by kind permission of the Cathedral Administrator. All original works are for sale and the artist is kindly donating 30% of any sales to the Cathedral. Signed prints are available of any of the paintings.

Stephen B Whatley was born in London in 1965. He studied at the Ipswich and Norwich Schools of Art and the University of London. The artist’s expressionist oil paintings are in numerous private collections in Australia, Denmark, England, Germany, Hong Kong, Ireland, Japan, Scotland, South Africa, Spain, USA & Wales; and in public collections, including BBC Heritage, Historic Royal Palaces, the London Transport Museum, the Royal Collection, Taylor Woodrow Property Company Ltd & The Carrollton School of The Sacred Heart, Miami, USA.

Since 1988, Stephen B Whatley’s work has been shown in solo exhibitions (a highlight, his 1999 show, Hollywood Gold at the National Theatre) and in group exhibitions - including the ICA and he Lloyd’s Building, London.

The work of Stephen B Whatley has been the subject of features in the Catholic press: Catholic Life, The Catholic Herald, The Catholic Universe, The Catholic Times, Novena, The Vatican: Past & Present & Westminster Record. Other titles include The Guardian Weekend magazine, HELLO!, MAJESTY, Metro London, The New York Times, The Sunday Express, The Daily Telegraph, The Times, TIME & USA TODAY; while he has discussed his work on LBC Radio & BBC London.

Stephen B Whatley’s commissions include paintings of Buckingham Palace, both painted on location, to promote the Summer Opening of the Palace in 1999 & 2000, via London Underground posters: an exterior view of the Palace for the Royal Collection (which hangs today in Her Majesty’s London residence); and a painting of the Grand   - now owned by the London Transport Museum.

In 2000, the artist was commissioned to paint a vibrant series of 30 iconic paintings for Her Majesty’s Tower of London – many painted on location in and around the Tower. Since 2001, the entire series of works are reproduced through the public walkway that leads to the Tower of London. In 2004, Stephen was presented to HM The Queen and HRH The Duke of Edinburgh. In 2006 Stephen B Whatley was listed in David Buckman’s dictionary Artists in Britain Since 1945. In 2008 his portrait of Barack Obama was published in TIME magazine. In 2011 his tribute to “William & Kate” was published in HELLO!

In 2012 his Diamond Jubilee tribute to HM Queen Elizabeth II was exhibited at the Olympia International Fine Art & Antiques Fair. In 2013 Stephen donated his tribute painting of ‘Fred Flintstone’ which was auctioned and raised funds for the Joss Searchlight Children’s Cancer Support Charity, at a special charity art auction.