Our Lady of Mount Carmel: Church of Conversions 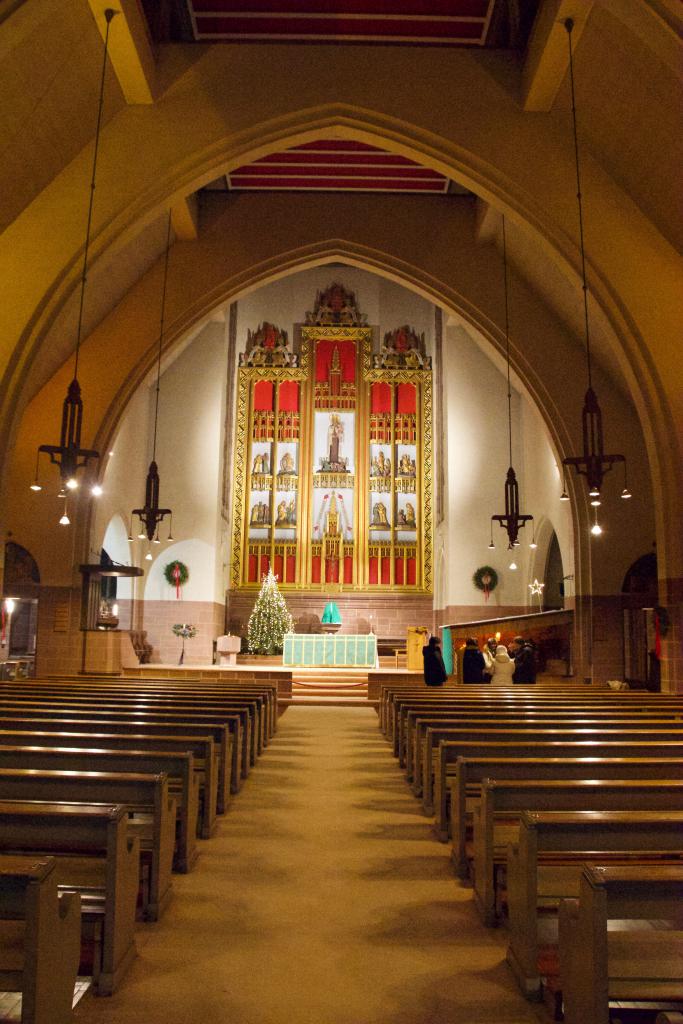 As I make my way through the crowd at High Street Kensington tube station, the wealth and prosperity is evident as the exit to the station makes its way directly into a shopping arcade. The wide roads are immaculately clean with an air of affluence. From the humble Sainsbury to the mighty Wholefoods, all lined up the street. Amidst such consumerism as I cross at the junction I walk past the Kensington war memorial which evokes feelings of patriotism and sacrifice. I arrive at this quaint church away from the hustle and bustle of the city, Our Lady of Mount Carmel and St Simon Stock, Kensington.

Warmly welcomed by Rita McDonagh, an active volunteer, from the side door, at first sight it is hard to recognise the structure as a church. As I enter, what lay in front of me is a huge church with a beautiful altar adorned with Christmas wreaths, a Christmas tree at the altar and a stunningly beautiful crib assembled to perfection. Being a weekday afternoon, the pews are empty with a few people praying. The ambience was sort of divine, with dim lights that draw you in to the church’s peaceful presence.

The founder of the church was a Carmelite named Fr Hermann Cohen, a Jewish convert born in 1820, a first class musician and a member of a brilliant circle of artists and litterateurs. On beginning his priestly ministry in England, he was given a small house adjacent to the convent of Assumption Sisters, Kensington Square to live in. He managed to convert this house into a small sized chapel (a forerunner to the church) on 15th October 1862 with the help of two brothers and a few other religious. It was on 16th July 1865 that the foundation stone of the present day church was blessed by Cardinal Manning, second Archbishop of Westminster. As the name suggests, the church is dedicated to Our Lady of Mount Carmel and St Simon Stock.

The church was destroyed during WWII and extensively rebuilt in the 1960s by Sir Giles Gilbert Scott. By divine providence and with the support of parishioners and generous patrons, the church was restored.

On the second floor of the church, a wall holds a painting of the burning church, its title reads, ‘presented by the members of Kensington fire station … at the cessation of the London fire brigade on 31st March, 1965.’

The friars have seen an increase in the number of Carmelites, clergy and lay, the parish boasts of six priests that serve the parish actively: Fr John Williamson, Parish Priest, Fr Christopher Clarke, Prior, Fr John McGowan, Fr Luke Onwe, Fr Paul Vincent and Fr Tijo Xavier who are is also undertaking further theological studies.
Carmelites stand for a sense of family and community, which is evident from their routine of meeting five times a day to say the Office, a reflection of the importance of personal prayer as Fr Christopher explains. Having attended a Carmelite school as a young boy, he later became a Carmelite himself. He has only been serving for a few months in this parish. He has great technical acumen, I am told, when it comes to design and is already in a phase of planning minor enhancements to the layout of the church.

The location of the church gives it an advantage in the work of evangelisation. The presence of a plethora of hotels due to Kensington’s proximity to Heathrow airport means a lot of tourist regularly visit. Fr Christopher recalls an incident where an American tourist missed his flight and was put up at a nearby hotel. With the help of his GPS, he discovered this church and attended a Sunday service one morning. It is the inner GPS of our soul that makes us search for Christ even in a foreign land.

Fr John, Parish Priest, had a similar story to share. He received his calling to the priestly vocation when one Sunday morning in the late 60s while working shifts for the police, he was desperate to find a Catholic church to attend Mass. He chanced upon this very Carmelite church where he met Brother Alfred Clapham who encouraged him to return for a weekday Mass since he was not able to make it to church every Sunday. At the weekday Mass he was welcomed by Fr Ronan Murphy, the then-vocations director for the diocese, who made him consider a vocation to the priesthood.

The very land the church stands on was owned by a certain Mr Bird, who was renting it out to Fr Hermann Cohen, albeit quite reluctantly as it was a Catholic institution. Mr Bird experienced a change of heart when he read a translated article in The Times in 1865, written in a rather abusive tone, about Fr Hermann Cohen giving an account at a lecture in Belgium in the year 1864 of the last confessions he heard of five Catholic sailors who were condemned to the scaffold in London for piracy and murder. Mr Bird was impressed with Fr Hermann’s motivation of bringing more souls to Christ against all odds, even when they were close to death. Mr Bird willingly sold the land to Fr Hermann, more willing than Fr Hermann was to buy it. Truly, this parish can be rechristened ‘the church of conversions’.

It is a multicultural parish with a mix of French, Italian and Spanish parishioners. The church is accessible from 7am to 7pm on any day, with three Masses on weekdays rising to five on Sundays. (For Mass times, please visit carmelitechurch.org.uk)

There are various church groups such as the Legion of Mary, with the biggest programme of the parish being Sant’ Egidio, involved in communicating the gospel, sharing friendship with the poor, helping refugees, and other good works. The parish is continually evolving in serving the community and carrying out faith building activities, like encouraging parishioners to visit the Holy Land, Lourdes or Walsingham on pilgrimage.

I was informed of the various other Carmelites known for their zeal, service and love for God. Fr Simon Knapp was a Carmelite chaplain who served from (1915-1917) during WWII. In the words of the rifleman, ‘Our chaplain is a saint… he faced death at least forty times… with bullets in showers as hailstones, passing over the heads of penitents and confessor’. Another prominent Carmelite is Edith Stein better known as St Teresa Benedicta of the Cross, a Jewish philosopher who converted to Catholicism and became a Discalced Carmelite nun.

The church has stood witness to many divine experiences of the multitude who visit. Fr John had many to speak of but he recalls one such distinct instance. The relics of St Therese of Lisieux, a Carmelite, had been brought for veneration to the church. From the moment the relics were welcomed, he felt a divine aura and presence which seemed to fill the air. Senses could feel what words couldn’t explain. I would like to explain it as St Therese at work in spirit, as was her ardent desire to bring many more souls to Christ even when alive.

The Lady Chapel to the right as one faces the altar had a devotee praying while the crib in front was simply soothing the soul. Not much extravagance had gone into it, but there lay the infant Jesus welcoming you on a bed of hay in simple yet stunning manner. It was as if an invitation to come and see how the divine can make its presence known in those empty pews and draw you closer to it.