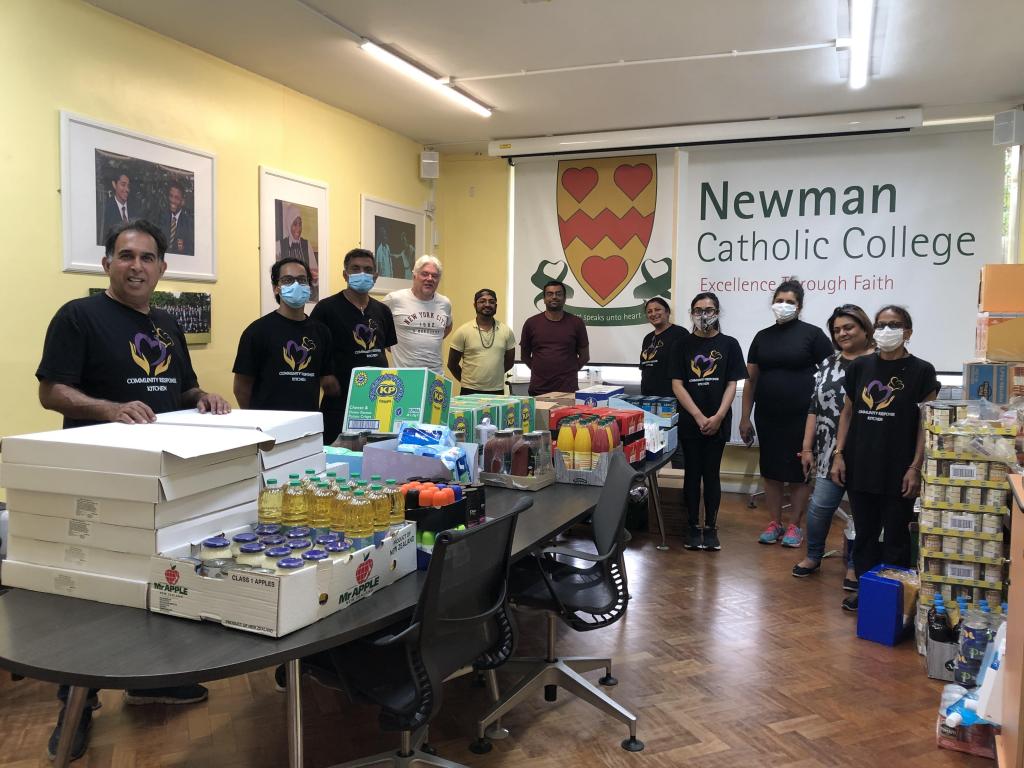 During the COVID-19 pandemic, staff at Newman Catholic College in Brent have been working to support the extended school community at a time of increased hardship. Daniel Patrick Coyle, Head teacher at Newman Catholic College, offers the following account explaining how the success of this endeavour has been made possible thanks to the school’s partnerships with local groups and charities.

The wellbeing of the Newman Catholic College community has always been a key feature of the work of our school, but in recent months this focus has sharpened. We are motivated by Pope Francis’ comment that, ‘I want a church which is bruised, hurting and dirty because it has been out to the streets, rather than a church which is unhealthy from being confined and clinging to its own security.’ It is a defining characteristic of NCC that we seek to pursue the ‘Common Good’. We are a ‘UNICEF Rights Respecting school’, a ‘Refugee welcome school’ and a ‘School of Sanctuary’.

Newman Catholic College was established as Cardinal Hinsley in 1958 and initially served a working class, Catholic demographic of families with Irish, Caribbean and West African backgrounds. Six decades later, the fastest growing groups within the school are of Muslim and Hindu faiths. The school aspires to be an inclusive environment for the community of Harlesden and NW10, a tight-knit neighbourhood where one third of families are classified as living in poverty.

Stories of increased hardship began to emerge in the second week of lockdown. Numerous reports were relayed of households reduced to one meal a day. Heart-breaking accounts of stress and violence between family members were beginning to stretch our capacity to respond. The school endeavoured to alleviate the worst of the hardship by reaching out to others and relying on strong and previously existing partnerships. During the pandemic, we have witnessed the astonishing efficacy of partnership work and collaboration.

The reality of domestic crisis is not new to the school. We are aware of the complexities in the lives of many families. The school has an outstanding safeguarding culture and seeks to offer as much support as possible. This support includes the school’s three summer camps, which have been running for five years and have received extensive recognition. In addition, the school delivers food hampers at Christmas to those we know would benefit.

The situation with Free School Meals has been problematic. While the Department for Education deserves credit for supporting families over the Easter and half term holidays, the company it chose to administer the scheme struggled at first to meet the enormous demand. Moreover, many of our families have found it difficult to use the technology. Given this situation, plus the dire need of those not entitled to Free School Meals but nonetheless experiencing difficulty, the provision of food became an urgent priority. It was at this point that the strong bonds which have developed at Newman Catholic College over the years kicked in and helped us meet some of the needs of our families.

I would like to highlight the work of several organisations that stepped up to help the Newman Catholic College community during this crisis. The food bank at one of our neighbouring schools, John Keble Church of England Primary School, generously opened its doors to families from outside its own school community. The Head teacher, Catherine Allard, was a forceful voice early on in the lockdown, encouraging families from other schools to take what they need. ‘Just give me their details so I know what to prepare for them’, was all she asked. Several months later this arrangement is still going strong.

The US Charitable Trust has supported the school for seven years. In that time, it has spent an astonishing £595,000 on pupils and staff. The charity’s activities have been wide-ranging, covering ‘urban survival’ programmes, camping trips to the Oxfordshire countryside, conferences and activities at school, plus innumerable opportunities for pupils and staff to develop their cultural capital through trips to the theatre, galleries and museums. As the crisis developed, the trust became a referral agency for children in need. They have also been highly creative in providing yoga classes and online educational provision for our pupils forced to stay at home during the lockdown.

By the end of April 2020, Caritas Westminster had spent £31,000 supporting families in the Diocese of Westminster. This outstanding organisation has provided immense support for Newman Catholic College over the years. As the lockdown entered the Easter holidays, Caritas Westminster stepped forward once more, providing money and food vouchers for the children of this area. The message to me was clear: ‘let us know what you need, and we will try to help’.

Caritas Westminster is part of the Diocese of Westminster, which has also offered additional support to our community during this time. As well as working with us to ensure that this year’s NCC/Metropolitan police/US Trust summer camp is successful, the diocese is also engaged in sourcing funds to achieve a long-term school goal: providing a hot evening meal for 150 pupils every day. In addition, Caritas Westminster and the Diocese of Westminster have utilised their network of contacts to help us access further support from FareShare, the Community Response Kitchen and the Annoor Mosque project.

Caritas Westminster’s Development Worker for West London, Sister Silvana Dallanegra, first directed me towards the work of FareShare. I signed up and within a week I was collecting fresh food every Wednesday morning from a branch of Tesco in West London for distribution to the families of Harlesden. Furthermore, it was phone call from the Diocese of Westminster that alerted the school to a major food donation at Octavia House in Ladbroke Grove. We were able to pass this information on to the Community Response Kitchen, based in North Brent. The team at the Community Response Kitchen has been working together since the end of March and is currently producing 2,500 meals a day. The recipients of the meals span several London boroughs and include hospitals, care homes and hospices. The Newman Catholic College community is being provided for on a seven-day-a-week basis. Team members from the school collect the food from the Emergency Response Kitchen and distribute daily deliveries to Sacred Heart Church in Kilburn, St Joseph’s RC Primary School, Queens Park Community School and My Romania Community.

One of the most inspiring consequences of the response to the lockdown in Harlesden has been the collaboration between different groups who otherwise might not have worked together. Through the Community Response Kitchen, we met the phenomenal Dr Naz, who took over our school kitchen for three weeks in the run up to Eid on behalf of Ealing Community Aid and the Annoor Mosque. This partnership allowed us to play our part in ensuring that our brothers and sisters from the local Muslim community did not go hungry in the run up to the celebration. Naturally we were able to ensure that the hundreds of Muslim children at Newman Catholic College were invited in on Eid to collect a small gift. It was a joyful moment amid the hardship.

There have been challenges during lockdown. Often the logistics failed, and fleet-footed alternatives were necessary. However, we now have a robust system in place to ensure that all those who need food are not left hungry. The moral imperative to support the poor is alive and kicking in NW10, thanks to the daily work of those projects described above, and the clear-eyed steadfastness of all our partners.