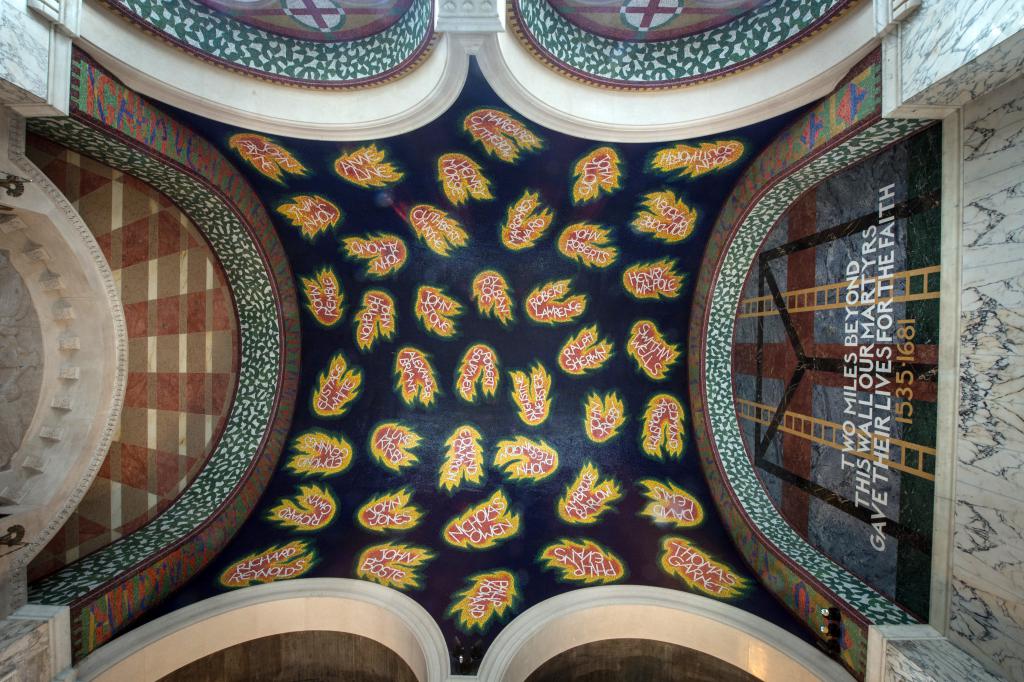 The recently completed decorative scheme by Tom Phillips CBE RA (pictured below) in the Chapel of St George and the English Martyrs at Westminster Cathedral was dedicated by Cardinal Vincent on 28 October.

This event marks the end of a long programme of work that started on site five years ago, but its completion in 2016 is appropriate as the chapel contains the cathedral’s war memorial. Its soot-stained brickwork has stood unclad for over a hundred years and the unveiling of its marble and mosaic decoration this year will commemorate the centenary of the Battle of the Somme. The chapel’s dedication is to St George and the English Martyrs and Tom Phillips’ scheme links the Great War with another chapter in the nation’s suffering, that of the English martyrs in the sixteenth and seventeenth centuries. The names of the forty Catholic martyrs are emblazoned in mosaic across a dark sky in the chapel vault and their suffering is recalled by a depiction of the Tyburn gallows in marble on the west wall. 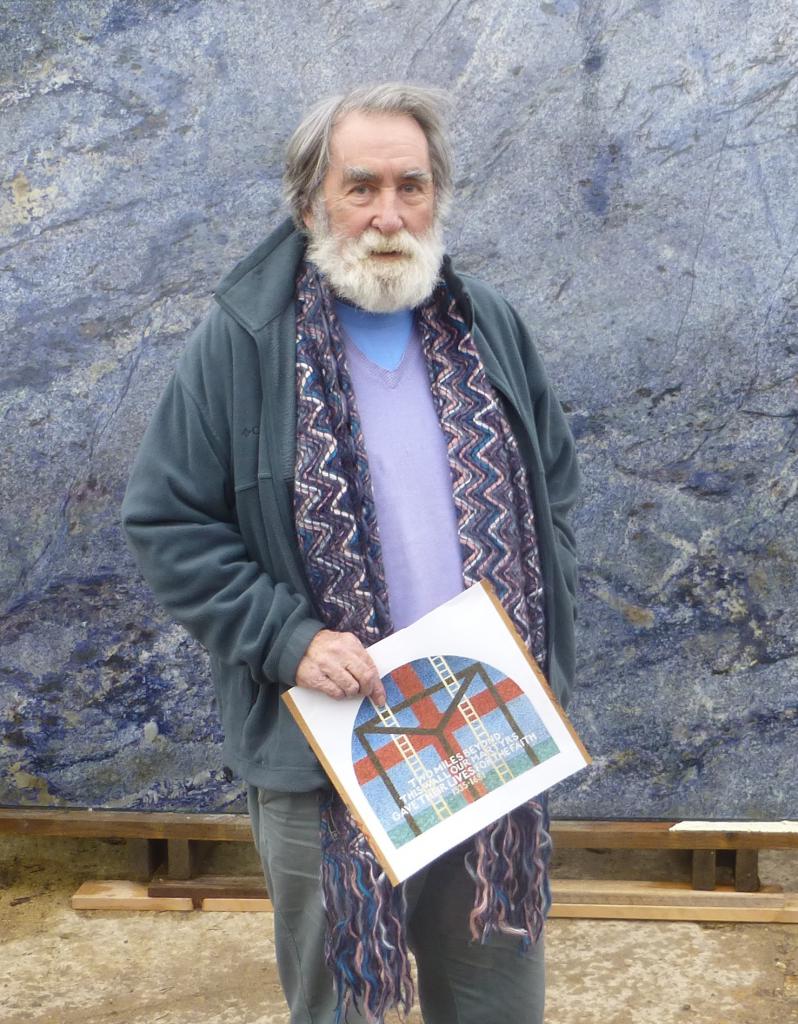 ‘I thought the martyrs should be given their names’, says Phillips, ‘and be in heaven in the vault, the flames of their burning faith still bright. The west wall shows the gibbet at Tyburn as traditionally represented, with the ladders which served it now depicted as ascending above, into the vault. As you face it you are pointing directly towards the site of Tyburn, two miles away at Marble Arch.’

The ladders also echo Phillips’ earlier marble work relating to Elgar’s Dream of Gerontius in the adjacent Chapel of the Holy Souls. The artist recalls how the St George’s Chapel project started over a dozen years ago when Mgr Mark Langham, then Cathedral Administrator suggested the texts from St Luke and the Nunc dimittis, now realised in contrasting overlaid mosaic in Latin and English over the arches.

As Tom Phillips rightly tells us, he first put forward his initial thoughts to Mgr Langham and the Cardinal’s advisory group, the Arts and Architecture Committee, in 2004. The earliest version of the scheme for the vault included 85 names, a decision being taken later to restrict the number to the 40 canonised in 1970. The necessary re-working of the design continued as the Friends of Westminster Cathedral raised funds and in 2011 a contract was let to Nimbus Conservation Ltd for enabling works, whereby the architectural framework, within which the decorative scheme sits, was completed under the direction of the cathedral architect, Michael Drury. Marble tablets, erected following a suggestion made in the Tablet in 1915 and supported by then Duke of Norfolk as a memorial to those who had given their lives in the First World War, had compromised the architectural sub-division of the chapel. This had to be re-established by the introduction of a carved corbel in Carrara marble on the north wall. Marble cladding at the east end of the north wall was completed also, as were carved details to the cornice and capitals elsewhere. 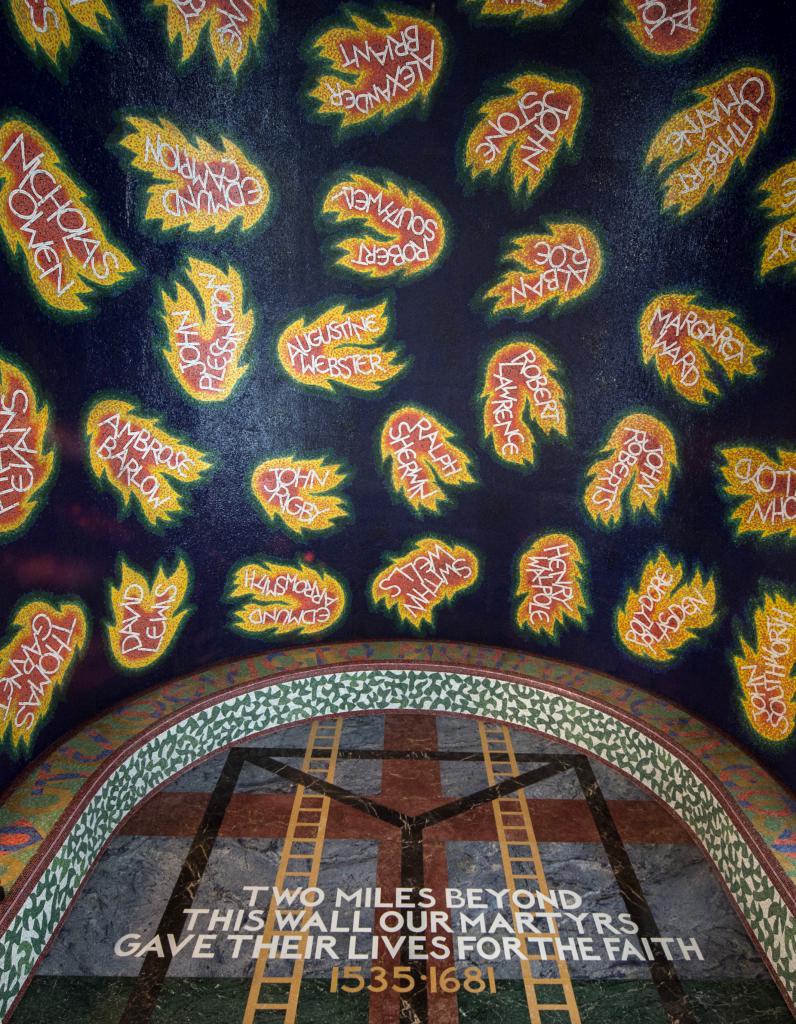 Next came the east wall where the chapel is dominated by the Eric Gill relief placed above the altar, depicting the Crucifixion. Two martyrs from the reign of King Henry VIII, Sir Thomas More, Lord Chancellor of England, and John Fisher, Bishop of Rochester, stand on either side of the Cross. Gill’s last work, it was completed shortly before his death in 1940, more than 20 years after his famous Stations of the Cross. Tom Phillips carefully integrated the Gill relief, carefully cleaned in 2012 (as were the metal screens on the south side of the chapel), as the focal point of his design. On the arch above this panel the decoration continues in mosaic, the text being from the Gospel of St Luke, referred to earlier by Phillips and written both in Latin and English. The Latin text is used in devotions at the college of English Martyrs. The English, part picked out in gold, is intended to be more instantly legible and translates only the first part of the quotation, ‘I have come to send a fire upon the earth’.

The window reveals and their associated surfaces on the north wall were completed in March 2014. Described by Phillips as non-repeating organic forms representing the abundance of nature, the mosaics here preceded his over-arching vault, which followed immediately. Fabricated off site by Trevor Caley Associates under Tom’s guidance, this continuous mosaic design incorporates the blessed martyrs by name. Each inhabits a flame-like shape, organised as if peopling a dark sky. They are the sparks referred to by St Luke, illuminating the dark night of the Church in England in the period of the persecution of Catholics.
Finally came the west wall and here there is a radical change from the mosaic first proposed. The Tyburn gibbet remains the subject but his original mosaic design has been re-interpreted by Phillips in marble. When justifying his revisions he described how the subject matter rhymes with that of Gill’s Crucifixion, completing the allegory of the chapel as a whole. The flame of faith is kept alive, sustained by the example of Christ’s sacrifice, even when the sky of circumstance is dark and the abundance of England and its pastoral continuity is inextinguishable by virtue of the sparks of true belief that find their ultimate devotion to the living Christ in the imitation of his death. The choice of marble rather than mosaic again echoes the east wall.

The arch also echoes the opposite end of the chapel, incorporating a text using the same technique of linking Latin and English versions in a kind of simultaneous translation. Again the text was chosen following discussion with Mgr Langham and here the mosaics were executed by Trevor Caley Associates. The Tyburn intarsia was made and fixed by Taylor Pearce Ltd. The lighting was designed by James Morse and the project was directed throughout by the architect, Michael Drury, on behalf of the artist and the cathedral. Canon Christopher Tuckwell, present Cathedral Administrator, expressed his gratitude to all concerned and in particular to the Friends of Westminster Cathedral who funded the scheme. Especially he draws our attention to the unstinting efforts of Barry Lock who administered the appeal.