Migrant workers must not become scapegoats 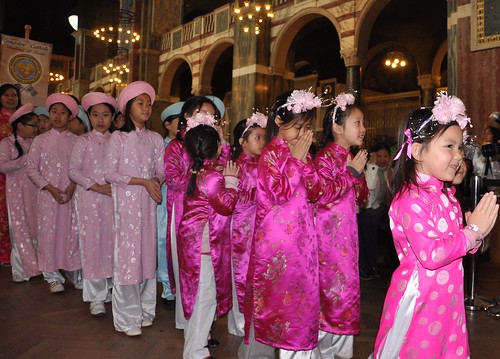 Over 2,000 Catholic migrants living and working in London attended a special Mass for Migrants at Westminster Cathedral on Bank Holiday Monday, 7 May 2012, the Feast of St Joseph the Worker.

The Mass reflected the tremendous diversity of London’s Catholic community, with music from across the globe.

Over 30 VIPs registered to attend the Mass including MPs Jon Cruddas and Jim Dobbin, the Deputy Mayor of the City of Westminster ,the Mayors of Richmond, Kensington and Chelsea and Brent, and ambassadors from EU and other countries including Ghana, Nigeria, the Philippines, Bolivia and Poland.

A small selection of photos can be viewed here

The Mass was celebrated by the Right Rev Thomas McMahon, Bishop of Brentwood.

The homily was given by Archdiocese of Southwark Auxiliary Bishop Pat Lynch, SS CC, Chair of the Office for Migration Policy of the Bishops’ Conference of England and Wales.

In his homily he praised the contribution that migrants make to British society in working for organisations such as the NHS. He aske  Catholics to “proclaim a message of hope that God is close to the poor, the vulnerable, the exploited, those seeking asylum and those who are undocumented.”

He also stressed that the Catholic Church is concerned not just about migrants but also about their families: “A family does not cease to be a family because one of its members emigrates overseas. The Universal Declaration of Human Rights (16.3) recognizes the family as 'the natural and fundamental group unit of society entitled to protection by society and the State'.   The right of families to reunite should be a priority in a civilized state.”

His final message was to urge Catholics to speak out on behalf of migrants, asking God to “give all of us the courage to speak out prophetically and do what we can to prevent migrant workers from within or outside the European Union becoming scapegoats and targets of popular frustration with the economy.  Jesus preached a message of hope and was by the way he accompanied others and the way he helped and healed others a sacrament of hope.”

(The full text of the homily is given below)

This was the seventh Mass for Migrants to have been organised jointly by the Diocese of Westminster, the Archdiocese of Southwark and the Diocese of Brentwood and supported by their Justice and Peace Commissions and Ethnic Chaplaincies.

A choir for the Mass was provided by the Nigerian community.

“Migration has its painful and most discomforting challenges” said Fr Albert Ofere, ethnic chaplain for the Nigerian community in London. “Religious challenges are no less exceptional. The Chaplaincy has got a legal surgery and a project team to help point people in the right direction in settling. The Chaplaincy also creates a family and friendly atmosphere for interaction and networking. “

A liturgical procession and dance was carried out by young people from the Vietnamese Community.

The Vietnamese Chaplaincy is based in East London, in Poplar. Fr Paul Chanh is the chaplain serving the 3,000 Vietnamese Catholics that live in and around London.

The Vietnamese was represented in good numbers at the Mass for Migrants and Fr Paul explains that this is because the community want to return some of the diocese’s generosity: “We owe a lot to the diocese. The community feel that the diocese supports us and feel that it gives them everything they need. That is why, if the diocese ask them to do anything, they do their best to get involved.”

When I was a young priest working in Peterborough one of my responsibilities was to celebrate Mass in a sugar beet factory very early on a Sunday morning. The seventy men who attended  were all fishermen from the West of Ireland  who had come to work in what was called the ‘sugar beet campaign’ when the summer fishing season was over.

The Mass itself was usually uneventful.  There was always a strong smell of beet in the air, the participation of the men was minimal and needless to say the homily was always very brief.  However, when one remembers that fifty percent of the men had just finished the night shift and the other fifty percent were just beginning the morning shift it was amazing that anyone was there at all.  Nevertheless, I learnt a great deal from those men about the hardships involved in being a seasonal migrant worker - the long hours, the low pay and the poor living conditions - but also about  how deeply committed they were to their families, to their faith and to their fellow workers.  There were two men in particular who epitomised that solidarity – Michael and Seamus.  Both of them had families back in the West of Ireland and both were experienced sugar beet workers.  They would regularly watch out for the younger lads – encouraging them to send money home to their families, encouraging them not to drink too much on their days off and encouraging them to come to Mass on Sundays.  They helped me to understand the importance of solidarity for migrant workers facing of hardship.

I start with that experience because our readings today - for the Feast of St. Joseph the Worker – invite us to reflect on three important elements of the Church’s mission to migrant workers – affirming the dignity of migrants, promoting solidarity with and amongst migrants and speaking out prophetically on behalf of migrants.

Affirming the dignity of migrants.   The first reading from the book of Genesis outlines the key principles of social life for the People of Israel.

In the Gospel Matthew reminds us that Joseph was a tradesman – a carpenter – but in the opening chapters of his Gospel he has already told us how Joseph and Mary were in fact uprooted from their home three times. First they had to travel to Bethlehem for the census, then they fled to Egypt and finally they returned to Nazareth when it was safe to return.  In other words Mary and Joseph were refugees and Joseph was in fact a migrant worker.

The Church’s affirmation of the dignity of migrants and migrant workers is therefore inspired by the experience of the Holy Family and flows from our belief that everyone is made in the image and likeness of God.   The contribution of migrant workers to society should therefore be measured not just by the amount they earn but rather by they good they do.  Your contribution to British society is important and your contribution to the Church is important.  You enrich our society through the values you live, through your commitment to your families and through your dedication to national institutions like the National Health Service.  You enrich the Church through your love for the Scriptures and your enthusiasm for worship.  My first prayer today is, therefore, a prayer of gratitude for the contribution that migrant workers make to our Church, our society and our culture.

Promoting solidarity with and amongst migrants.  The word ‘solidarity’ is not an easy word to understand.  In three of his encyclicals Pope John Paul II repeatedly called ‘solidarity’ an essential virtue of social life.  ‘Solidarity’ he suggested is an interior attitude which recognizes that to be human is to be interdependent but it is also an active virtue whereby we commit ourselves to promoting the common good.  This means doing all we can to help people to connect with, belong to and participate in all the networks, communities and organizations that are an essential part of life in Britain today.

My second prayer this morning is also a prayer of gratitude - gratitude for all our ethnic chaplains and leaders of ethnic communities, for all the clergy, religious and laity, for all the parishes, parish groups and organizations who have worked tirelessly to facilitate greater participation and involvement of migrant workers and migrant groups in the life of the Church and in society.

Speaking out prophetically on behalf of migrants.  In today’s Gospel Matthew describes the hostile reaction evoked by Jesus’ prophetic teaching.  That teaching had both a comforting and a challenging character – always proclaiming a message of hope but always calling the listeners to change and conversion.  The parables of Jesus present us with a choice. We can respond positively like true disciples or negatively like the people of Jesus’ home village.

Likewise, if we are to be a prophetic community we too must proclaim a message of hope that God is close to the poor, the vulnerable, the exploited, those seeking asylum and those who are undocumented.  This means having the courage to speak out against injustice and unfairness.  It is important, however, to see injustice and unfairness through the eyes and example of Jesus – in other words through the eyes and experience of those who suffer most.  Jesus always reached out to the suffering and the struggling and associated with those who were excluded.  He helped people especially those struggling and suffering to experience the closeness of God’s presence in their lives. That is why the Church is concerned about migrants and especially the most vulnerable – domestic workers, those who are trafficked, those who are homeless and those who are poorly paid.  A basic principle of Catholic Social Teaching is that everyone deserves to be treated fairly and helped appropriately.

The Church is also concerned for workers’ families. A family does not cease to be a family because one of its members emigrates overseas. The Universal Declaration of Human Rights (16.3) recognizes the family as “the natural and fundamental group unit of society entitled to protection by society and the State”.   The right of families to reunite should be a priority in a civilized state.

So my final prayer is that God will give all of us the courage to speak out prophetically and do what we can to prevent migrant workers from within or outside the European Union becoming scapegoats and targets of popular frustration with the economy.  Jesus preached a message of hope and was by the way he accompanied others and the way he helped and healed others a sacrament of hope.  Today we ask the Lord to help us to continue his mission.