'Know that he is risen and walks at your side' 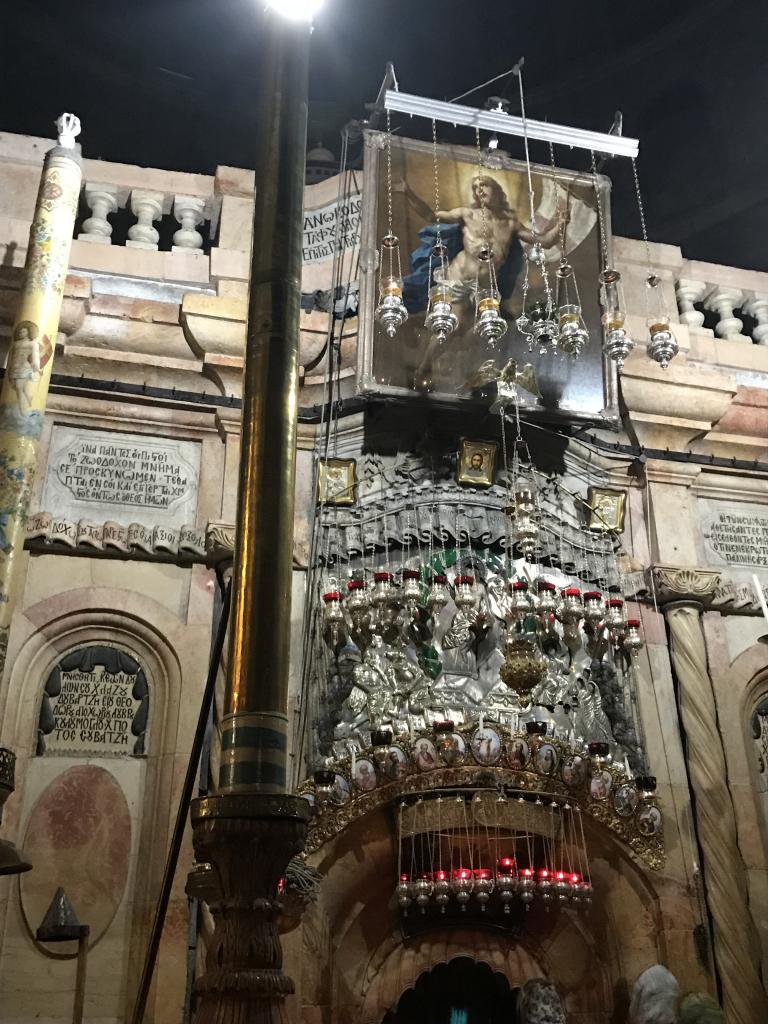 Every Sunday afternoon, the Franciscan friars lead a procession through the Church of the Holy Sepulchre in Jerusalem. I am fortunate enough to have participated in this procession and the memory remains vivid. At a rapid pace, the procession prays a series of ‘stations’ around the basilica, visiting chapels and shrines associated with the passion of Christ, his death and resurrection.

Bearing lighted candles which are difficult to keep alight, pilgrims move rapidly up and down steep stairs, round narrow corners, and through restricted doorways to try to keep close to the head of the procession. They jostle and bump together in a way which is both chaotic and prayerful. 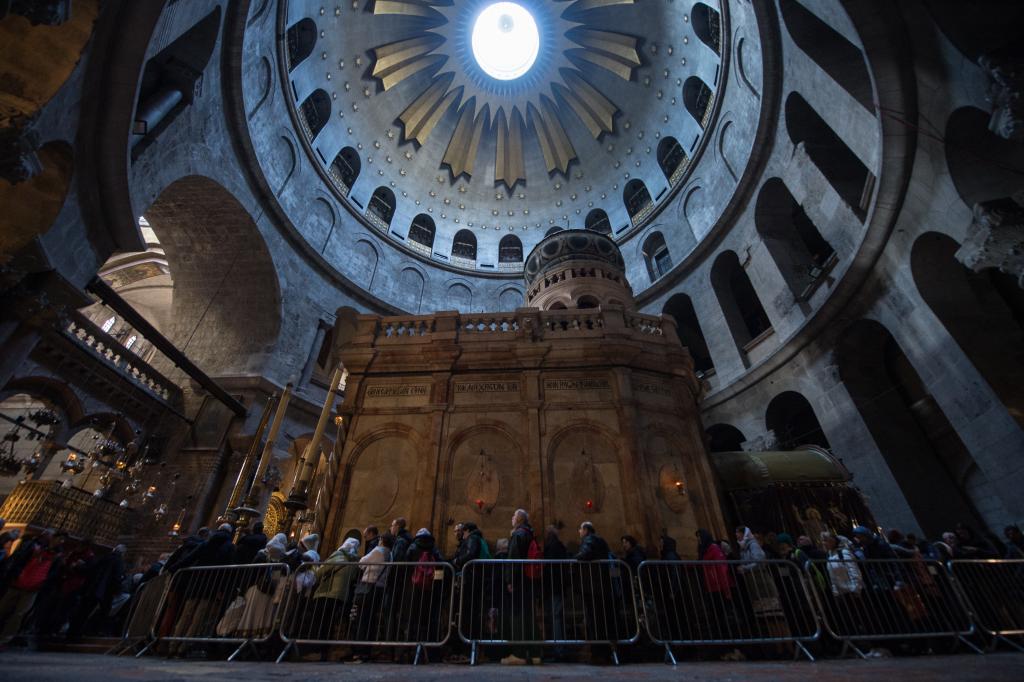 I imagine that it must have been like this on the crowded Friday afternoon when Jesus carried his cross down the Via Dolorosa and came to Golgotha, the place of the Skull, where he was crucified. As the procession prays at the site of the rock in which the foot of the cross was placed, a profound silence fills the church as we remember Jesus praying ‘Father into your hands I commend my spirit’ and breathed his last. The silence is palpable.

Then a hasty exit, more confusion and down the stairs to the stone of anointing and then the empty tomb. But this of course is not the end. A further station is prayed when the Risen Christ greets his mother. Surely the Risen Christ would have appeared to his mother, the Mother of Our Saviour and the Mother of God, to tell her of the new life in which she would be the first to share. 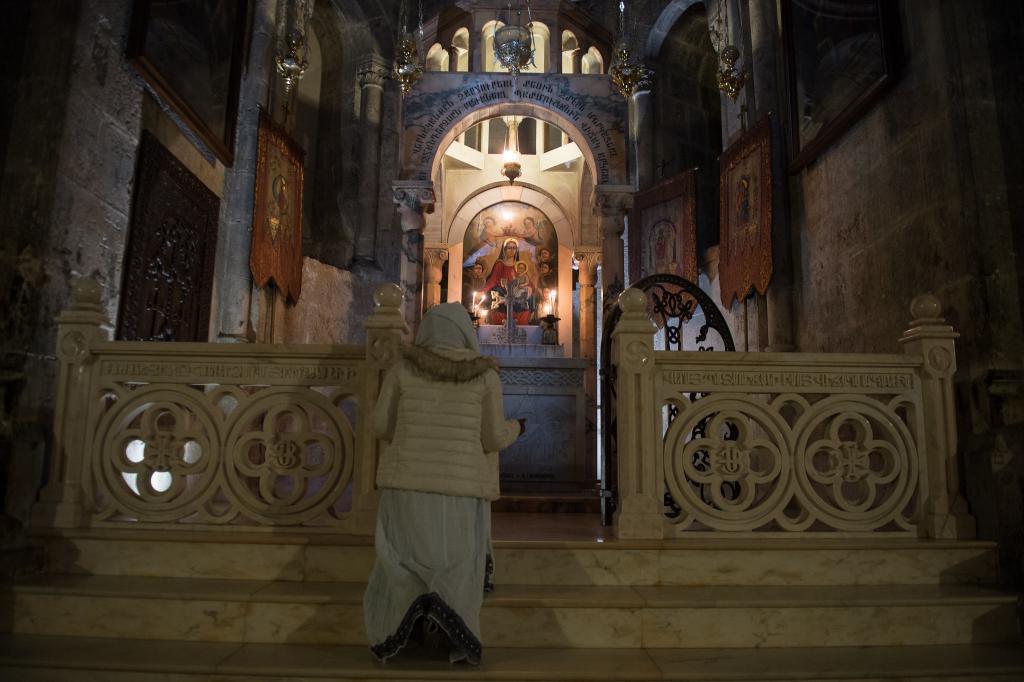 Then into the Latin Chapel where Benediction is celebrated. As we sang the words of the Tantum Ergo, words which have echoed in my heart, ever since the childhood years of Benediction on a Sunday afternoon as an altar server, the incense rose towards the Almighty in this house of prayer. Another profound silence followed as we were blessed by Christ, present in the Blessed Sacrament, and then the murmur of the Divine Praises.

Like so many thousands of pilgrims over two thousand years, we had come to the empty tomb but learnt more deeply the meaning of the words which the angel spoke to the women who had come to the tomb, ‘Do not be afraid, for I know that you seek Jesus who was crucified. He is not here, for he has risen’ (Mt 28:5-6).

He is risen and now truly present in his Body and Blood which we have revered and worshipped on the altar of the Benediction. There is no need to come to the empty tomb because Christ has gone before us into the world. ‘Behold, he is going before you to Galilee; there you will see him, See, I have told you’ (Mt 28:7).

The procession summarised the movement of our faith, through his passion to his death and resurrection, and the sacramental life of the Church where he is present. Now the Risen Christ goes before us and is present wherever the Church gathers to live its faith, celebrate her liturgy, to love and serve others.

The house of prayer is not confined to the old temple in Jerusalem but the New Temple is Christ himself. Whether the Eucharist is celebrated in the prison camps, the favelas or in the majesty of architectural gems of churches, he is present and with us.

This year we feel the loss of our liturgies, the desert of these days. We yearn to return. We are forced once again to gather in our houses of prayer with families or alone. The outreach to feed the hungry, the housing of the homeless, the care of neighbours, shows a rebirth in solidarity and love.

As St John wrote to a community that was losing its sense of the need to wash one another’s feet, ‘But if anyone has the world’s goods and sees his brother in need, yet closes his heart against him, how does God’s love abide in him? Little children, let us not love in word or talk but in deed and in truth’ (1 Jn 3:17-18). Pope Francis called for the Church to be like a field-hospital. The care and service which has blossomed in these extraordinary days has manifested this reality.

Martin Luther King preached in 1957, ‘Good Friday may occupy the throne for a day, but ultimately it must give way to the triumphant beat of the drums of Easter.’

May the hope of Easter and the Risen Christ carry you through this period of suffering and tribulation. Know that he is risen from the dead and walks at your side, as he did on the road to Emmaus.