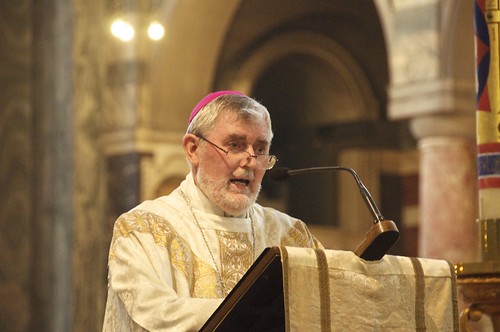 The Jesuit Refugee Service and the Bishop responsible for Migrants have criticised the Government’s decision to stop supporting operations that save migrants at danger in the Mediterranean. They were responding to Foreign Office Minister Baroness Anelay’s statement on 28th October that the current search and rescue operations to prevent migrants drowning in the Mediterranean Sea can encourage more people to attempt to make the dangerous sea crossing to enter Europe and that the UK would not support it in future.

Speaking to Independent Catholic News, Louise Zanré, the Director of JRS-UK, said: ‘The decision is unconscionable. It puts peoples’ lives at risk – and purely because of a nonsensical idea that rescuing people at sea is in some way a pull factor. People are being forced to flee across the Mediterranean in unseaworthy boats and in overcrowded conditions. No one makes that choice if he or she does not have to.’

The search and rescue mission run by the Italians is being wound down and will be replaced by an EU force which will carry out a more limited border security operation (Operation Triton) with a third of the budget of Mare Nostrum, the Italian search and rescue operation which has been running off the Libyan coast for a year.

‘It is wrong to withdraw support for the rescue operation,’ Louise continued. ‘And it is wrong to use these circumstances to make a cheap political point about immigration. It is almost inconceivable that 150,000 people have had to be rescued at sea in the Mediterranean, while fleeing for their lives. We should not make this a tragedy worse by refusing to rescue them.’

In a statement released on 30th October, the Rt Rev Patrick Lynch, Auxiliary Bishop of Southwark and Chair of the Office for Migration Policy at the Bishops’ Conference, said:

‘Last summer at Lampedusa Pope Francis challenged us to take responsibility for our brothers and sisters. He warned us against losing our bearings in a culture of comfort and becoming insensitive to the cries of other people. Since the tragedies of last October, the Italian navy has led efforts to save many thousands of lives but now this is a time for all European governments to recognise that others' suffering is our business. While efforts are being made to find lasting solutions to these challenges, we have a duty to heed with compassion the cries of our wounded brothers and sisters, and not to pass by on the other side. Britain is still Europe's leading naval power, and to refuse to join in Mediterranean search and rescue operations would be a misguided abdication of responsibility to those thousands of men, women, and children who have been driven from their homes by persecution and war and forced to risk death at sea.’

Mare Nostrum was triggered last year by a boat disaster off the tiny island of Lampedusa in which more than 300 migrants drowned. After the disaster in July 2013, Lampedusa was the destination for Pope Francis’ first pastoral visit outside of Rome after his election the previous March. He said Mass for the migrants who had died crossing the Mediterranean Sea and condemned the ‘global indifference’ to their plight.