Grenfell Tower: The Best of Humanity 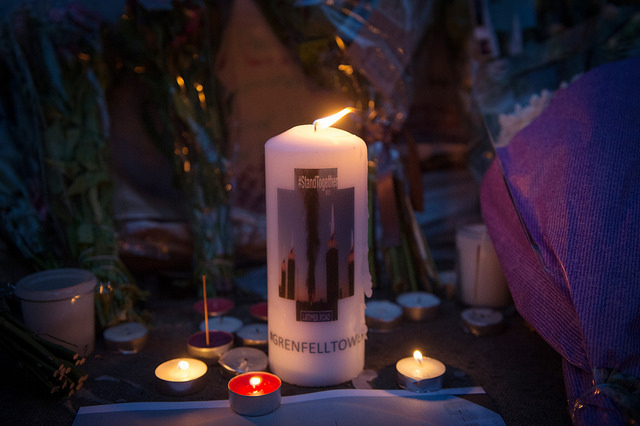 In this reflection, written on Friday 16th June, two days after the disastrous Grenfell Tower fire, Fr Peter Wilson shares some thoughts about the events of the day and how the locan community has been supported.

It was a privilege today once again to accompany Bishop John Wilson as he spent the whole day tirelessly ministering across the full range of people affected by the Grenfell Tower fire.

The morning was spent visiting the Catholic schools of the area. Each of them has been affected. St Francis of Assisi Primary School in Notting Hill is now housed in Sion Manning. Meeting with the children in each class, and with the staff who have to carry the burden of their own responses while supporting and caring for the children, Bishop John gave time and a gentle yet strong encouragement to them all. The head and staff at Sion Manning have been brilliant at making space and a warm, safe welcome for St Francis. Fr Gerard Skinner and I were deeply touched by the whole encounter, and by Bishop John's pastoral care. There is a beautiful way in which the response of children so often evokes a delightful laughter, which brings hope.

At St Charles Primary School we were just in time to see off a busload of children heading for a weekend trip to Dorset. But saying goodbye to them were parents whose hearts were heavy with grief because some of their friends were in the building and unaccounted for. Now their hope is turning to that dreadful awareness that they will have perished.

At St Mary’s in Kensal New Town, with Fr Philip Baptiste, and once more a round of class visits. There was the awful reality endured by a child fortunate enough to have escaped, and a staff member who lives in flats opposite the building and so had been a witness to the horrors which had unfolded that dreadful night.

Then down to the site itself, where we joined Fr Peter Scott, who has been tirelessly ministering to those engaged in the grim tasks now being performed there.  Today the site is much more palpably tense and distressing. Yesterday Fr Gerard, Fr Peter and I had free access and many extraordinary conversations with the brave, dedicated men and women. Today we had to be accompanied everywhere we went by two police officers, with whom we struck up a good relationship. The way the clergy darted about, stopping to talk to various people, made their job rather difficult! But they dealt with it with good humour. ‘Herding clergy is worse than herding cats, isn’t it?’ I asked them.

The priority at the site yesterday was still the dousing of the smouldering ruin. Today, it is the grim removal of remains. One of the firemen with whom I spoke unburdened some of the horrific things he is having to deal with. There was immediate trust. ‘You’re MY priest! I’m an old Cardinal Manning boy!’ These people are remarkable.

Beyond the perimeter there is growing anger and distress because people do not have information and many seem to believe they are being kept in the dark. Inside the perimeter these brave men and women continue to do their best. While the anger and sense of torment of those searching for some news is understandable, there is an injustice being done to those whose task it is to uncover that news they are desperate for. They are doing an extraordinary and exceptional job, and need an immense amount of support. The pupils of one of the classes from St Francis have been composing letters of thanks to them, which we shall deliver in due course, so that they know how much they are appreciated.

Next we met with some of the Councillors representing the local wards, with whom we also spent time yesterday. They are the ones who are going to have to carry forward the political issues that come into play with this dark tragedy. They are such good and committed people, with level heads driving a commitment to justice. One of them is the councilllor for the ward in which St Pius X lies, Mohammed Bakhtiar.

With him and Cllr Bevan Powell from Golborne Ward we then went (still under police escort, their job now made more difficult in having to escort a combination of clergy and politicians) to the Latymer Christian Centre, where the now-familiar wall of prayers and remembrances is located, and thence to the Westway Sport Centre, which had earlier been visited by Her Majesty The Queen and Prince William. I was delighted to be met by our parishioner Irene, volunteering at the entrance. She seemed very proud to announce that her priest was visiting! I didn’t want to deflate her enthusiasm by pointing out I was really accompanying the bishop. How magnificent all the volunteers have been, and how great an example they are of the best of humanity!

Meeting with some of those who have been temporarily housed there was sobering. I have to admit that I took the easy path and engaged with some children who were scampering around and playing. I took on the role of the bad ogre trying to catch them, to squeals of delight. Bishop John suggested that the part came naturally to me! How heart warming the laughter of children is, especially in times of tragedy.

On the way back to the site of the disaster, we encountered the Anglican Bishop of Kensington, with whom Bishop John engaged in conversation. There has been a good ecumenical unity of effort in working for those in need.

Returning to the foot of Grenfell Tower, Bishop John and Councillor Bakhtiar stood side by side, the Bishop donning a purple stole and reciting a Psalm and prayers for the dead while the Councillor prayed in the Islamic Tradition. No witnesses, no show, just a quiet moment of faith in the face of that stark monument of death, which another Anglican clergyman had described to me as a physical and emotional scar on our landscape.

Late afternoon now, and heading for home. One of the Sky News staff recognised me after the interview from yesterday and asked if I would come over for another one. Instead I landed Bishop John in it!  I wondered whether they really wanted to interview people who had to have a police escort. By way of penance I shall return at dawn for Sky at Sunrise. The media can be intrusive, it can be a circus, they are hungry for material. But they are also trying to do their job, and there have been some privileged conversations behind the scenes with some of them.