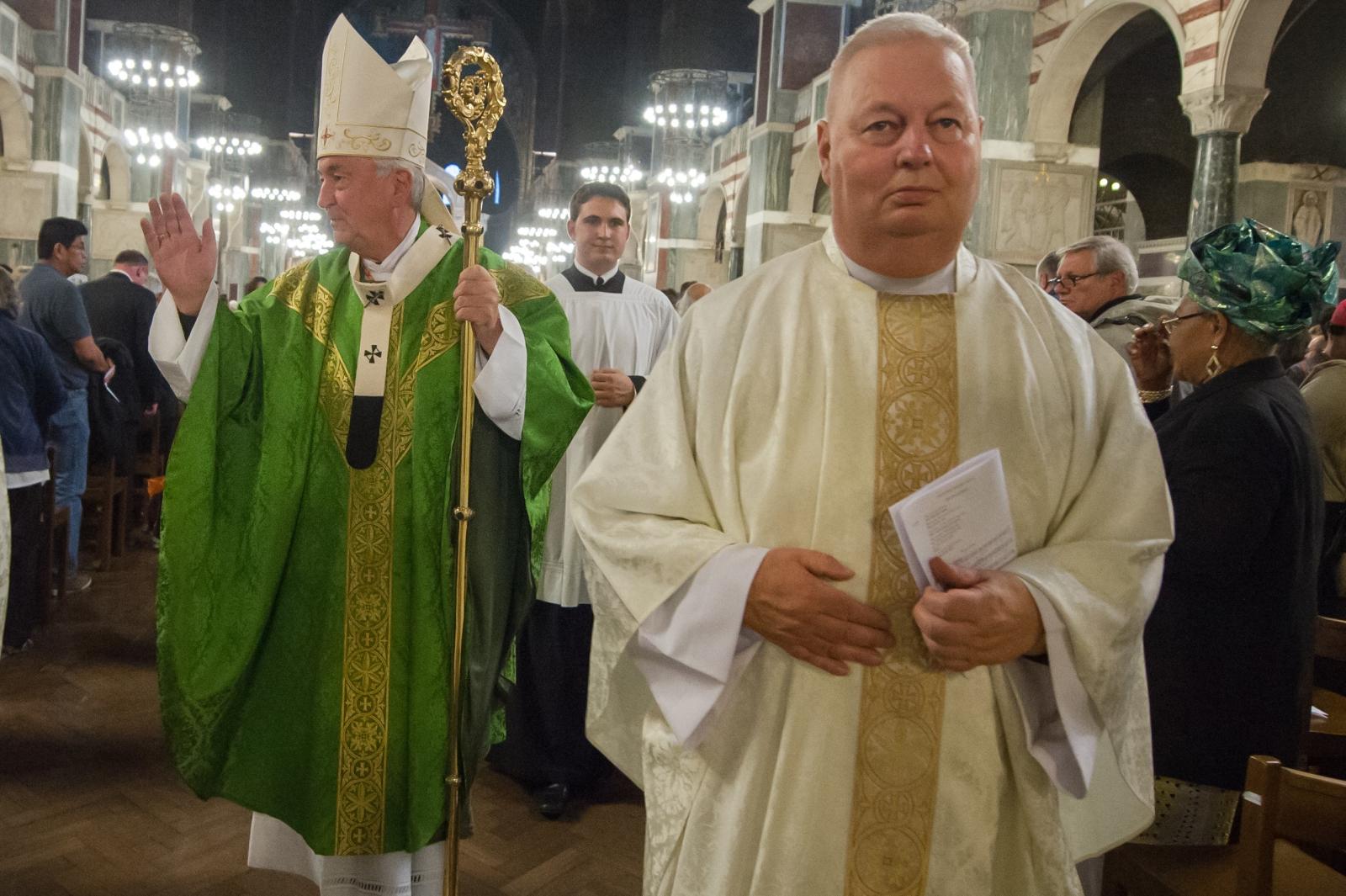 We announce the sad news of the death of Fr David John Irwin. Fr David died at home in Findon Village, Worthing where he had been living in retirement.

Fr David was born on 1st March 1944 and was ordained as a Catholic priest on 4th December 1995 in Westminster Cathedral having left ministry in the Church of England and then Received as a Catholic in May 1994.

Sympathy is extended to Fr David’s family and friends, and to the clergy and parishioners among whom he lived and ministered as an Anglican and as a Catholic.

Fr David’s Funeral Mass will be at St James’, Spanish Place on Wednesday 1st December at 12noon. This will be followed by cremation with the burial of Ashes at West Grinstead in due course. Bishop Alan Hopes will preside at the Funeral Mass. On Tuesday 30th November Fr David’s mortal remains will be brought to the church for 6pm evening Mass.

Lord Jesus, our Redeemer,
you willingly gave yourself up to death so that all people might be saved and pass from death into a new life.
Listen to our prayers, look with love on your people who mourn and pray for Father David.
Lord Jesus, holy and compassionate, forgive his sins.
By dying you opened the gates of life for those who believe in you.
Do not let our brother be parted from you, but by your glorious power give him light, joy and peace in heaven
where you live for ever and ever. Amen

St Thomas More is quoted on the prayer card produced to mark the Reception of David Irwin into full communion with the Catholic Church on 31st May 1994: ‘Thank you, dear Jesus, for all you have given me, for all you have taken away from me, for all you have left me.’ In February 1994 Canon David wrote to his parishioners in the parish of S. Andrew and S. Francis of Assisi, Willesden Green, ‘…the General synod of the Church of England has taken the final steps and that ordination of women to the priesthood is now legal… I cannot accept this as God’s will for his church…the only possible and honourable thing is to withdraw’. Canon David, Parish Priest, resigned as did many other clergy who believed that the Church of England had left them and the Church of England did not have the authority to ordain women to the priesthood. This decision was not easy for Canon David. His letter went on ‘…after almost eighteen years of ministry here this is not a step I have taken lightly. I have been tremendously happy and fulfilled here. It would be tempting to carry on as though nothing had happened but that would be impossible and indeed culpable for it would be going against truth’. He completed his ministry in the Church of England by celebrating the Easter liturgies with his parishioners, soon after his fiftieth birthday. His conscience led him to be reconciled with the Catholic Church and to offer himself for ordination as a Catholic priest. He received encouragement from Cardinal Hume and those who worked closely with him, including the now Cardinal Vincent Nichols, then Bishop in North London.

David John Irwin was born in Portsmouth on 1st March, St David’s Day, 1944. His sister, Ann, recalls that from the age of four when David was asked what he wanted to be when he grew up he replied he ‘wanted to be in the Church’. His secondary education was at Worthing High School for Boys from 1955 to 1962. He then spent a year working with the Sheffield Industrial Mission. From 1963 to 1966 he studied Theology at Kings College London and then went to study at Warminster Theological College. In May 1967 David was ordained as a deacon and in June 1968 as a priest by Bishop Mervyn Stockwood at Southwark Cathedral. He served as Curate in Sydenham from 1967 to 1970 then as Curate in Ealing from 1970 to 1976. He then ministered in Willesden, Gladstone Park and, from 1983, as Vicar of S. Andrew and S. Francis of Assisi, Willesden Green and Gladstone Park. His energy and enthusiasm transformed the parish. Approachable and friendly, he built up the community and he used his musical abilities as a singer and organist to ensure the dignified celebration of the liturgy. However, when things occasionally went wrong he could find it hard to conceal his displeasure. During his time in Willesden Green he ministered as a hospital chaplain and as chair of governors of the parish school and as a member of the deanery synod standing committee. He went as a commissary to two Ghanaian dioceses, Kumasi and Cape Coast, 1986-94, and was appointed Honorary Canon of these Anglican dioceses. He worked collaboratively with other clergy in the parish and with parishioners. He came to the Catholic Church as a popular and effective pastor.

David was ordained as a deacon of the Catholic Church on 18th July 1995 and, in the same year, on 4th December as a priest, his fourth ordination! He was appointed Assistant Priest at Our Lady’s, St John’s Wood where he had served as the lay Pastoral Assistant, then deacon, from 1995 to 1999. His next appointment was the Sacred Heart of Jesus parish, Holloway Road as Parish Priest, from 1999 to 2003. In 1998 he was given additional responsibilities as Spiritual Director to the Union of Catholic Mothers in the Diocese. Having moved on from Holloway Road and after twelve months’ sabbatical leave Fr David was appointed Parish Priest at St Peter-in-Chains, Stroud Green from 2004 until 2010 when he went to live in the rectory at St James, Spanish Place. In 2010 Fr David was appointed Coordinator for the Ethnic Chaplaincies then, in 2014, Episcopal Vicar as this work included engagement with the Archdiocese of Southwark and the Diocese of Brentwood. He was deeply committed to the work of the chaplaincies and to the welfare of the Chaplains, showing them fatherly concern. In 2014 Fr David was appointed Conventual Chaplain ‘Ad Honorem’ to the British Association of the Sovereign Military Order of Malta (OM), having served as a Magistral Chaplain since 2005. Fr David had been involved previously as a Spiritual Director with the OM’s Lourdes pilgrimages since 1999. Other OM pilgrimages took him to Lebanon, Walsingham and Holywell.

Fr David moved from Spanish Place in 2019 at the usual retirement age of seventy-five. He had been very happy there, but was beginning to find the 42-step climb to his rooms challenging! He went to live in the bungalow in Findon Village, Worthing rented from the Church of England Pensions Board since 1994 on his departure from the C of E. He was relieved to know that the Diocese of Westminster’s Sick and Retired Priests Fund would meet the cost of the monthly rent, council tax and water rates. Fr David continued involvement with the Order of Malta as Principal Chaplain but stood down as the Senior Chaplain for the Lourdes Pilgrimage, and he stood down as Spiritual Director for the UCM after some twenty years in this role. In his retirement Fr David provided greatly appreciated supply ministry in local parishes including Arundel and West Grinstead. In 2020 Fr David stood down as Coordinator of the Ethnic Chaplaincies because travelling to and from London had become more challenging due to health issues and the restrictions caused by the coronavirus pandemic. In his letter to the Ethnic Chaplains, dated 7th December 2020, he wrote ‘I have come to realise that since retiring and moving back to West Sussex it is difficult to get to London as frequently as is necessary to do this job properly. I would like to thank all of you for your kindness to me over the ten years in the job. It has been a great joy to be able to share a little in the vibrant life of your communities and I hope I may have been of some help in your work. For my part I have found this to have been one of the most rewarding of the tasks I have undertaken.’

Those who serve as Ethnic Chaplains, other priest-colleagues, friends and parishioners in many parishes in the Church of England and in the Diocese of Westminster have cause to be grateful to Fr David for his dedication to priestly life and ministry, a ministry of service that was affirming and enabling of others as disciples of the Lord. Fr David was kindly and cheerful, infectiously so, and his easy going and affable manner, warm smile and evident sense of fun put people at ease, including sick people and poor people. He gave of himself generously and his positive attitude made people feel good about themselves and their role in the life and work of the Church.

In December 2020 Fr David celebrated his silver jubilee of ordination as a Catholic priest with Mass followed by a convivial lunch with friends in a local pub. He found his true home in the Catholic Church. A ‘priests’ priest’ who retained some Anglican preferences, Fr David won the affection of all because of his commitment to the Lord and the Church and his desire to serve all entrusted to his care.

Photo: Fr David Irwin with Cardinal Vincent at the International Mass in 2016 (Mazur/CBCEW.org.uk)