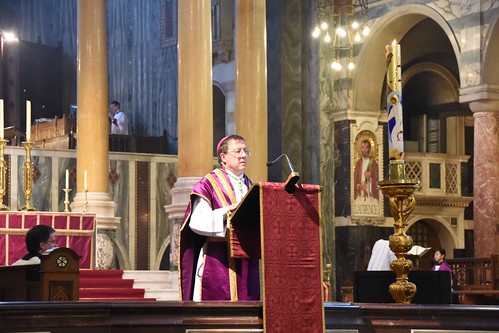 A Requiem Mass was celebrated by Bishop John Sherrington at Westminster Cathedral on 28 April to remember the Fallen at Gallipoli.

Bishop John explained that 'the celebration of a Requiem Mass for those who died at Gallipoli is a profound act of charity when we pray for the dead and ask that God in his merciful love will welcome them into his kingdom of love.'

Recalling the sacrifice of those who fell at Gallipoli, he said 'each death touched and profoundly changed the life of so many families and communities scattered across this country and the Commonwealth.'

In his homily, Bishop John also recalled the sacrifice of Fr William Finn, the army chaplain who, although commanded to stay on the ship, 'saw so many soldiers being killed that his heart was deeply moved and he asked to go ashore.' Fr Finn was soon wounded 'and over a period of hours continued to hear confessions, give absolution and console the soldiers who were dying,' until he too surrendered his soul to God.

Bishop John also recalled those who suffer in conflict zones today: 'Christ on the cross unites himself with their suffering in one great act of hope which reveals that evil never has the final word and that the good is always triumphant.'

The full text of Bishop John's homily is available here.