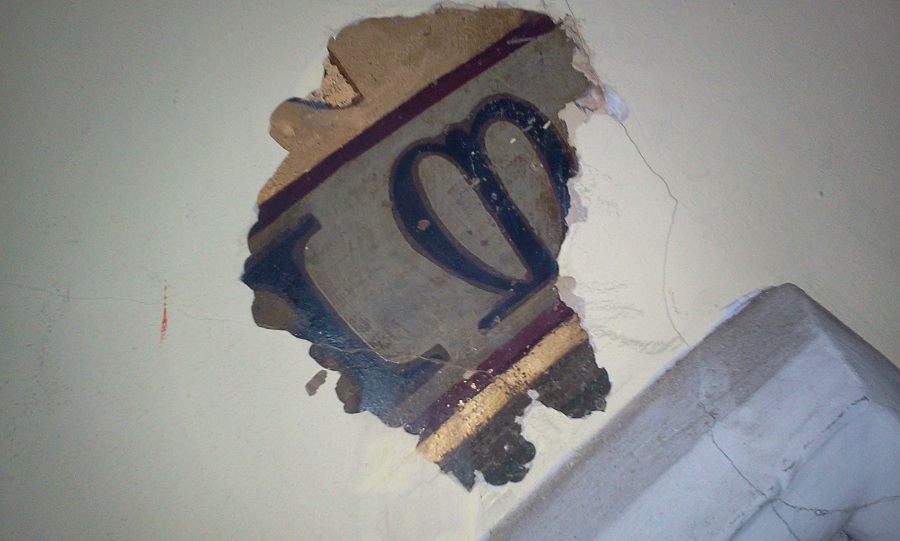 Restoration work at St Monica's Church in Hoxton Square in January has uncovered original decoration by E.W. Pugin, featuring Latin inscriptions and stylised floral motifs. Pugin, the son of Augustus Welby Pugin, one of Victorian England's most eminent church architects, designed the Church and prior of St Monica's.

St Monica’s has a colourful history, with the gilded wooden altar being consecrated in 1875 and a Lady Chapel constructed in 1880, both of which were blessed by Cardinal Manning. St Monica’s has also been privileged to have as its parish priest Father Michael Kelly (1833-1914), the 'Saint of the Slums'. Within three years of his arrival, he set up a committee to relieve the distress resulting from a severe winter, was instrumental in establishing the parish school and raising money for it, and quickly gained the respect of the local people, especially the Catholic poor. So widespread was his fame at the end of his life, that his obituary appeared in The New York Times and pictures of his funeral covered the entire back page of the Edwardian London tabloid, The Daily Sketch.

To aid in the restoration of Pugin’s work, the story of Fr Kelly has been written by Jean Olwen Maynard entitled 'The Saint of Hoxton', with all proceeds from the book funding the restoration work.

On Saturday 9 February St Monica’s will host an open evening of evangelisation, entitled 'Prayer in the Square'. The evening will include a holy hour of silent prayer from 5-6pm, Mass 6.30pm-7.30pm, and an open evening event from 7.30pm-9.30pm.