Diocese without Frontiers: Life at the Apostolic Nunciature 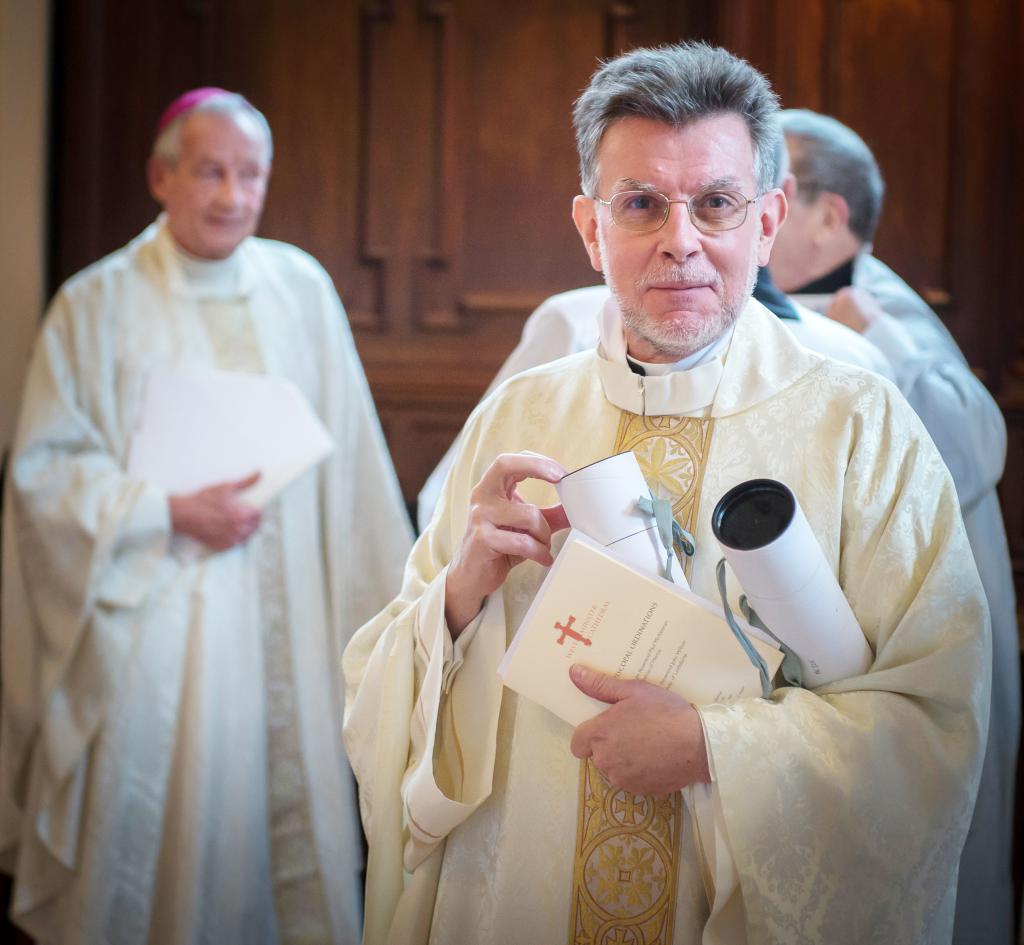 In this occasional series of articles from our diocesan priests who serve in other roles outside the diocese, Mgr Vincent Brady provides a look at the Apostolic Nunciature.

I have been assigned to the Apostolic Nunciature, which
is the Vatican Embassy in London for just over 15 years now, and a question I have been asked regularly is: ‘Does the Ambassador really serve Ferrero Rocher chocolates at receptions?’ This for me rather highlights the fact that people often have a hazy idea of the work of Papal Representatives and Ambassadors in general.

In fact, as a parish priest by trade and training, I was astonished to be appointed here as the Nuncio’s Private Secretary. My role is to help with his diary, to brief him before events and meetings and to help in any way that he needs. I suspect that the reason I was asked is that having served as Cardinal Hume’s Private Secretary from 1989 to 1994, I was known to be good at carrying bags for important people and to be a reasonably competent PA.

After ordination as a priest in 1980, my appointments have been as Assistant Priest at Holy Rood, Watford, St George’s, Sudbury and Blessed Sacrament, Copenhagen Street. After my time with Cardinal Hume I then served as Parish Priest at St Matthew’s Northwood and Our Lady of Victories, Kensington.

I have been at the Apostolic Nunciature since 2003 and I am currently serving under my fourth Nuncio (two from Spain, one from Italy and now Archbishop Edward Adams from the United States of America). There is also a second accredited member of Vatican Diplomatic staff here and I am now working with my sixth (one from Poland, then America, Nigeria, Spain, Mexico and now Monsignor Matteo De Mori, from Italy).

One could say of the Apostolic Nuncio, that, like most Catholic bishops, he wears two hats. The first is his formal diplomatic role as Ambassador to the Court of St James, which involves liaison with the Foreign Office and other members of the Diplomatic Corps based in Great Britain. Like any other ambassador he keeps an eye on the news and the political life of the country and keeps the Vatican informed.

His other hat is to be a link between the Holy Father, Pope Francis, and the bishops of Scotland, England and Wales and a conduit for communications in both directions. He shares in the role of the Pope in ‘strengthening the brethren’. He has an advisory and supportive role with the hierarchy but he is not in any sense a ‘super bishop’ and he cannot intervene in the life of any particular diocese. The local bishops, as successors of the Apostles, are responsible for pastoral matters in their own dioceses.

He also has a responsibility to try to find and suggest worthy candidates for the office of bishop and to make discreet enquiries about their suitability which are then passed to the Congregation of Bishops in Rome for consideration and presentation to the Holy Father. Mercifully, because my Italian is not so good, I am not really part of that process.

One of the parts of my role which I really enjoy would be the Nuncio’s pastoral visits to the different dioceses up and down the country. Sometimes it’s for formal events like episcopal ordinations or diocesan jubilee celebrations. Sometimes it means simple visits to parishes for more local occasions: a great chance to meet priests and people in their own situations and to experience so much good work, continuing day by day, which very seldom makes the news.

When one is ordained a priest, at least speaking for myself, one has very little idea what may be asked during the years, yet the Lord is good and, if one tries to say ‘Yes’ to him and maintains a sense of humour, for the most part, his ‘burden is light’.

May I ask for your prayers for the Apostolic Nuncio, Archbishop Edward Adams, and for those of us who share in his ministry. Perhaps I should also mention by way of conclusion, that after all these years, my only regret is that Ferrero Rocher chocolates are not quite as abundant as most people expect!