Home > Diocese News > Chrism Mass: The Importance of Love and Prayers for Priests in their Ministry
Email to a friendPrintable version

Chrism Mass: The Importance of Love and Prayers for Priests in their Ministry 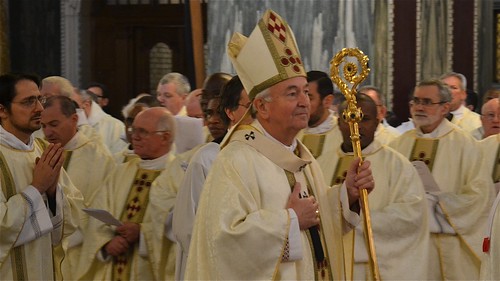 The Most Rev Vincent Nichols, Archbishop of Westminster, celebrated the annual Chrism Mass at Westminster Cathedral on Tuesday 26 March 2013. The Mass was concelebrated by the Auxiliary Bishops of Westminster and had over 300 priests and 1000 people from the Diocese of Westminster in attendance.

During the Chrism Mass all priests make a renewal of their commitment to priestly service.

In his Homily, Archbishop Nichols reminded priests of their particular calling of service to be a witness to Christ and the importance of humility and renewal on occasions when they fail in this ministry:

“Through the action of the same Holy Spirit and drawing out from this common priesthood of the baptised, another line of priests is constituted in the Church, the lines of ordained priests who are here, gathered with me about this altar. The same Spirit of the Lord is given to us so that we may act in the life of the Church in the name of Christ its Head, serving you, the holy People of God, so that together we may indeed serve our God and Father and witness to his love, his truth and his goodness.

It is this work of the Holy Spirit in our ordination that we seek to renew today. And our renewal is sought in prayer and in humility. Just as the first words of Pope Francis were to ask for the prayers of the people of the Church, so too our request today is that you continue to support us priests with your love and prayers.

We need it. We priests, in a special way, are called to be faithful witnesses. Yet we fail. Sometimes our failure is spectacular. Sometimes it remains hidden from general view, known only by those who have been hurt. Yes, in every case our failure does harm to other people. That is why our request for your prayers is made in humility of heart and our seeking of renewal is coupled with our sorrow for our offences.”

“My brothers in the priesthood, my sisters and brothers in Christ, at the beginning of his Pontificate, and with refreshing directness, Pope Francis invites us to be renewed in simplicity, in which we demand and take much less for ourselves. He calls us to renewed compassion and tenderness, in which we live by the mercy of God.”

Further photographs of the Chrism Mass are available here.