Celebration of Priesthood in the Diocese of Westminster 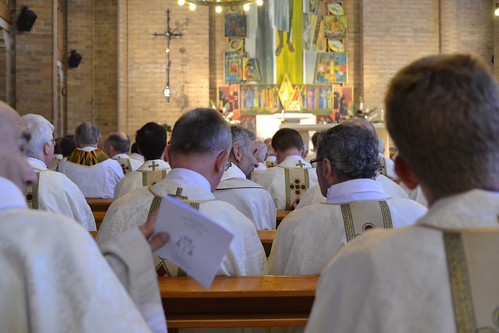 On Thursday 6 June the priests from the Diocese of Westminster came together for the annual celebration of Priesthood at St Mary’s University College, Twickenham.

The day began with a reflection on Critical Challenges to Central Catholic Beliefs: Preaching in the Year of Faith given by Archbishop di Noia, Vice-President of the Pontifical Commission Ecclesia Dei.

In his talk Archbishop di Noia spoke of the challanges being faced explaining Catholic teaching in a more secular environment, in particular focusing on religious pluralism and expressive individualism as a moral ideal. Archbishop di Noia spoke about the need to communicate well “why we need a saviour who is not just any saviour, why we need Christ to be authentically human and why the moral law is good for us.”

“In such circumstances retrenchment is not an option. In order to confront these challenges we need a confident evangelising and a robust, but not overbearing apologetics.”

Following the talk the priests gathered to celebrate Mass at the chapel which was celebrated by Archbishop Vincent Nichols. In his homily Archbishop Nichols spoke about Jesus Christ as being ‘the source of our life of ministry’ which dwells within. He went on to say in the most trying and difficult times a central element of priestly life was to ‘reach through the tangle of emotions for that wellspring of God’s light where new life flows’, even though it could be challenging with the competing demands priests faced daily.

Archbishop Vincent Nichols went on in his homily to reflect on the jubilarians in attendance, who were celebrating anniversaries of ordination ranging from 25 to 70 years, speaking of his “admiration and thanks for their steadfastness and faithfulness”.

Further photos from the event can be found here.