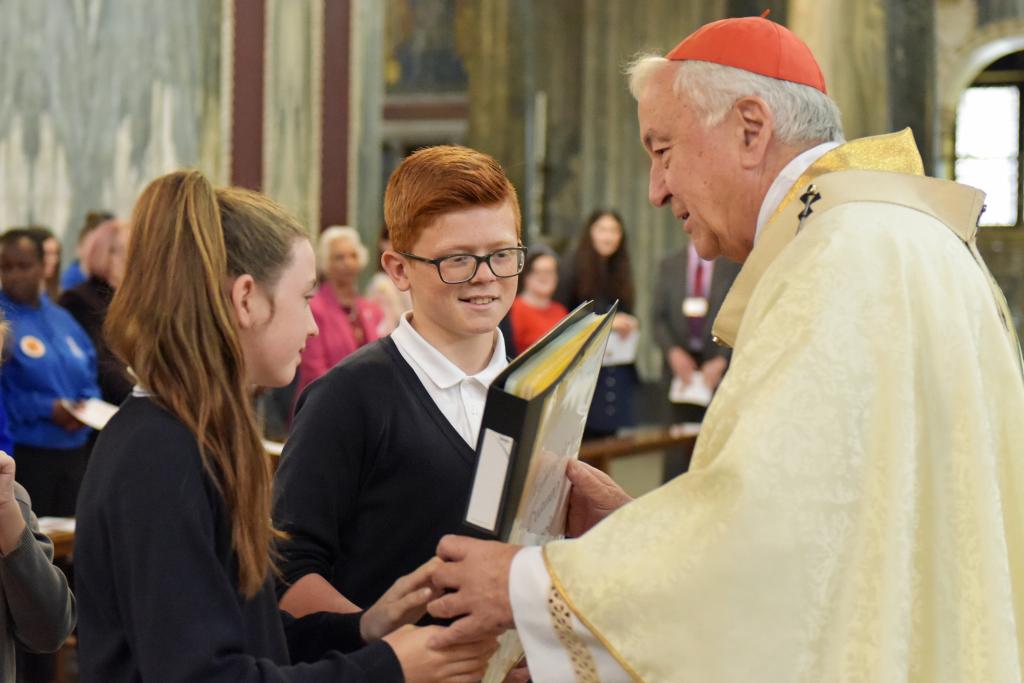 by JP Morrison
Director of Education

This summer witnessed the 50th anniversary of the Apollo 11’s Eagle Lunar Modular landing on the moon. Every aspect of this audacious achievement has been analysed and scrutinised for years; however, one extraordinary action that took place has received relatively little coverage, until now.

Buzz Aldrin, part of the lunar team, was also an elder in his Webster Presbyterian Church and, before he went into space, he sought special permission to receive communion whilst on the moon. Aldrin, on the advice of NASA, was asked to keep his religious beliefs general as the world would be listening very carefully and when the time came, he said, ‘I’d like to request a few moments of silence. I’d like to take this opportunity to ask every person listening in, whoever and wherever they may be, to pause for a moment and contemplate the events of the past few hours, and to give thanks in his or her own way.’

In 1994, three Catholic astronauts took Holy Communion on board the Space Shuttle Endeavour. Sid Gutierrez, Kevin Chilton and Dr Thomas D Jones held a short Communion Service whilst orbiting the earth.  As Dr Jones went on to explain, ‘The three of us thanked God for the views of his universe, for good companions, and for the success granted our crew so far. Then Kevin shared the Body of Christ with Sid and me, and we floated weightless on the flight deck, silently reflecting on this moment of peace and true communion with Christ.’

There is something telling about these two events, both good examples of a lived faith. Indeed, the extraordinary achievement of the space programme has plenty of insights to give in regards to the value of Catholic education. When Pope Francis says ‘The world tells us to seek success, power and money; God tells us to seek humility, service and love,’ he is sharing something the astronauts realised and educators can learn from.

As our schools return from their well-earned holiday break, they seek to renew and refresh a compelling vision for the communities they serve and identify with, and as Catholics we have a duty to support them. Our schools cannot be merely seen as culturally Catholic; they should be sacred places serving a valuable civic purpose. They need to be pragmatic, strategic and have more emphasis on collegiality so as to collectively face the challenges of recruitment and retention issues, falling numbers, tight finances and stretched resources.

Our schools continue to equip pupils with the tools of understanding. They strive to present an authentic vision of the Church’s moral and social teaching, so that pupils can make a critique of the underlying trends of contemporary culture and society. Religious Education in Catholic schools is two-fold: it not only educates children in the practice of their own and other faiths but, most crucially, provides the opportunity for formation in their personal faith. As Pope St John Paul II observed, if the Church’s institutions are genuinely Catholic they ‘need to be Catholic in the self-understanding and Catholic in their identity’. Catholic schools should be building on their primary mission by giving students the space to encounter the living God who in Jesus Christ reveals his transforming love and truth.

It is the role of our schools to strive to communicate Christ and to form Christ in the lives of others. As Pope Benedict XVI explains, ‘The witness never refers to himself but to something, or rather, to Someone greater than he, whom he has encountered and whose dependable goodness he has sampled. Thus, every educator and witness finds an unequalled model in Jesus Christ, the Father's great witness, who said nothing about himself but spoke as the Father had taught him.’

When Buzz Aldrin took communion on the moon he read from John 15:5; ‘As Jesus said: “I am the vine, you are the branches. Whoever remains in me, and I in him, will bear much fruit; for you can do nothing without me.”’ As our schools return in September, we can take inspiration from the extraordinary achievements of the astronauts and all the men and women who supported them in getting to the moon and back. In their success, we can see and emulate the drive to contribute to a project that requires a level of teamwork far beyond the capacity of an individual’s efforts. So, each school cannot act in isolation for they are part of a greater community of social educators who seek to ensure the teachings and face of Christ are known to all.

In a world lacking humility, it is refreshing to hear how these astronauts wanted to thank God and their faith for their achievements. For them it was about service and the appeal for the common good. As the new term begins we are grateful for all the men and women who serve in and for our schools. They demonstrate day in and day out a witness to faith and the resilience to cope with what is presented to them. As Buzz Aldrin said: ‘Resilience is what humans have and resilience is what humans need to take advantage of: their ability to explore and to understand and then to react positively and with motivation, not as a defeatist, to the constant flow of challenges. Negativity doesn’t get anybody anywhere. It takes reacting to all of life in a positive way to make the most out of what you’ve experienced and to make a better life and a better world.’