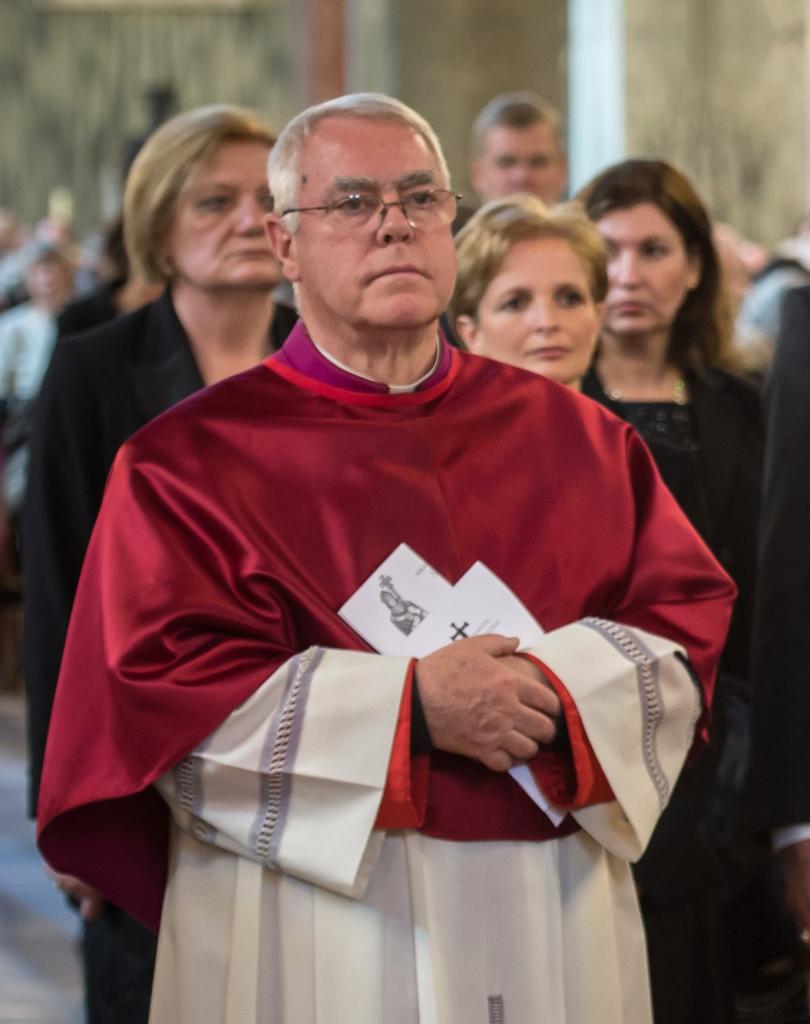 It is with sadness that we announce the news of the death earlier this evening, 26th June, of Canon Christopher Howard Joseph Tuckwell.  Canon Christopher died peacefully at the Royal Trinity Hospice, Clapham where he received end of life care in recent days.  The visit yesterday of Cardinal Vincent surely gave Christopher much consolation as he prepared for God’s embrace.

Sympathy is extended to Canon Christopher’s family and friends, and to the clergy and parishioners of the Cathedral parish and his former parishes in the Diocese, and to those among whom he ministered as an Anglican priest and to those with whom he served while an officer in the Army.

Canon Christopher was a member of the Deceased Clergy Association.  The Funeral Mass will take place in Westminster Cathedral on Tuesday 7th July at 10.30am, with the Cardinal presiding. The Mass will be live-streamed.

We pray for the repose of Canon Christopher’s soul:
Lord Jesus, our Redeemer,
you willingly gave yourself up to death so that all people might be saved and pass from death into a new life.
Listen to our prayers, look with love on your people who mourn and pray for Canon Christopher.
Lord Jesus, holy and compassionate, forgive his sins.
By dying you opened the gates of life for those who believe in you.
Do not let our brother be parted from you, but by your glorious power give him light, joy and peace in heaven
where you live for ever and ever.

May the soul of this faithful priest rest in peace.  Amen.

Canon Christopher would have turned 75 years of age, the usual age when Catholic priests retire, in September. A few months ago the Vicar General asked him about his retirement hopes and plans, and what assistance he might need with these. ‘I am a man under orders,’ he replied in his commanding but kind voice. ‘I will go when I am told to go, and I will do what I am told to do.’ He would have liked to continue the sterling work as Administrator of Westminster Cathedral he had been doing since 2008 and before that as the Sub-Administrator. But it was not to be.

Canon Christopher died peacefully on 26th June at the Royal Trinity Hospice in Clapham where he was receiving end of life care. Cardinal Vincent’s visit the previous day gave great consolation to the Canon who had stepped down as the Cathedral Administrator on 13th June due to failing health and the awareness that someone else had to take charge. When notice of his death was circulated an extraordinary number of messages of condolence and tribute were received, a reflection of the esteem in which he was held by people from a variety of backgrounds and whose lives had been touched by Canon Christopher’s life and ministry.

He was an indefatigable pastor who was totally committed to the priesthood, working long hours punctuated by short ‘power naps’ in his armchair or at his desk. He was a gifted pastor and administrator, he gave to individuals wise counsel and to congregations thought-provoking homilies. In social settings he enjoyed and could tell humorous stories and he could sing well into the evening and be up characteristically early the following morning, ready for all that the day might bring. He was faithful to his regime of personal prayer and to the liturgy of the Church whether in an informal setting on pilgrimage or in the grandeur of the Cathedral. Well-read and well-travelled, he wore his considerable learning lightly so that as a pastor he remained easy to engage with and as a leader he was authoritative, shrewd and inclusive.

Christopher Tuckwell, the son of Charles and Gladys Tuckwell, was born on 25th September 1945 in Kingston-upon-Thames, Surrey. He attended Malvern College from 1959 to 1964 before going to the Royal Military Academy, Sandhurst until 1966. He was commissioned into the Queen’s Royal Surrey Regiment and served as a platoon commander in Germany and Bahrain. He had a temporary attachment to the Sultan of Muscat’s armed forces. Back in the UK he was a training officer at the regimental depot in Canterbury and the divisional depot in Bassingbourn, Hertfordshire.

In 1970 he retired from the Army when his sense of vocation to the priesthood led him to Chichester Theological College from 1970 to 1973. As an Anglican ordinand he was awarded a Certificate in Theology from Southampton University. During vacations Christopher worked as a nursing orderly at Cromer Hospital. He was ordained as a priest in St Paul’s Cathedral on 30th June 1974. His first assignment was to St Matthew’s, Upper Clapton as Assistant Curate from 1973 to 1976. He then went to Holy Trinity, Georgetown, St Vincent in the West Indies where he served as Rector until 1985. In addition to parochial ministry Christopher served as a prison chaplain. On his return to the UK he went to Shepherds Bush, serving as Assistant Curate from 1985 to 1986. He then went to St Mary’s, Tottenham as Vicar from 1986-94, and serving as Area Dean for the final three years.

In October 1994 Christopher resigned from his ministry in the Church of England. He, and others, left the Anglican communion following the decision to ordain women to the priesthood. The issue of the authority to take such a decision led Christopher to seek full communion with the Catholic Church. A pilgrimage to Lisieux and a retreat with the Cistercians in Brittany gave Christopher additional opportunities for prayer and vocational discernment. He was received at the Church of the Five Precious Wounds, Stonebridge on 3rd November 1994, having moved to live in the presbytery. He continued to live there while doing pastoral work in the parish. The Bishop of Edmonton wrote that Fr Christopher ‘will be a great loss to the Church of England and I have no doubt he will prove a splendid priest in the Roman Catholic Church’. How right he was. Christopher was ordained to the priesthood in Westminster Cathedral on 4th December 1995, having been ordained as a deacon on 18th July. Cardinal Basil Hume presided at both ordinations.

Fr Christopher moved from Stonebridge where he served as Assistant Priest in 1996 to take up his appointment at Hemel Hempstead East as Parish Priest where he remained until 2001. During these years he was a chaplain at HMP The Mount. His next appointment was to St Scholastica’s, Clapton serving as Parish Priest from 2001 to 2006 and continuing with prison chaplaincy at HMP Pentonville. In December 2003 Fr Christopher wrote to Cardinal Cormac asking permission to accept the invitation to be the Honorary Regimental Chaplain to the Prince of Wales’ Royal Regiment, the successor of the regiment with which he served while in the Army. Permission was given. In May 2004 Fr Christopher was mandated for the ministry of exorcist in the Diocese, a ministry entrusted to priests with proven pastoral ability and deep spirituality. Another sign of Fr Christopher’s gift of discernment was his appointment to the selection advisory conference for candidates for the priesthood in March 2007.

In May 2006 Fr Christopher left Clapton to begin his appointment as Sub-Administrator of Westminster Cathedral, going on to become Administrator in 2008. Canon Christopher led the College of Chaplains at the Cathedral by his example of gratitude for the gift of priesthood and faithfulness to prayer and the Mass and by his pastoral concern. He enjoyed many of the elements of his role: greeting VIPs, extending a warm welcome to the many visitors to the Cathedral, and representing the Cathedral and the Diocese for over a decade. The pastoral visit of Pope Benedict XVI in September 2010 was surely a highlight for the Canon. He cultivated strong ecumenical relations with the Dean and clergy of Westminster Abbey. He became an ecumenical member of the College of Westminster Abbey in 2010. Less well known was his discreet work as a regular and faithful volunteer at The Passage, committed to his weekly visits. He was similarly committed to the weekly Mass celebrated for the Sisters who live at Clergy House. If the Portuguese language in which it was celebrated proved somewhat challenging, the Canon was never deterred and always gave it his best shot!

Canon Christopher’s presence and ministry in Clergy House, in the Cathedral and in the parish will be missed. This much respected and loved priest will also be missed across the Diocese and beyond.