A stained glass treasure in Letchworth 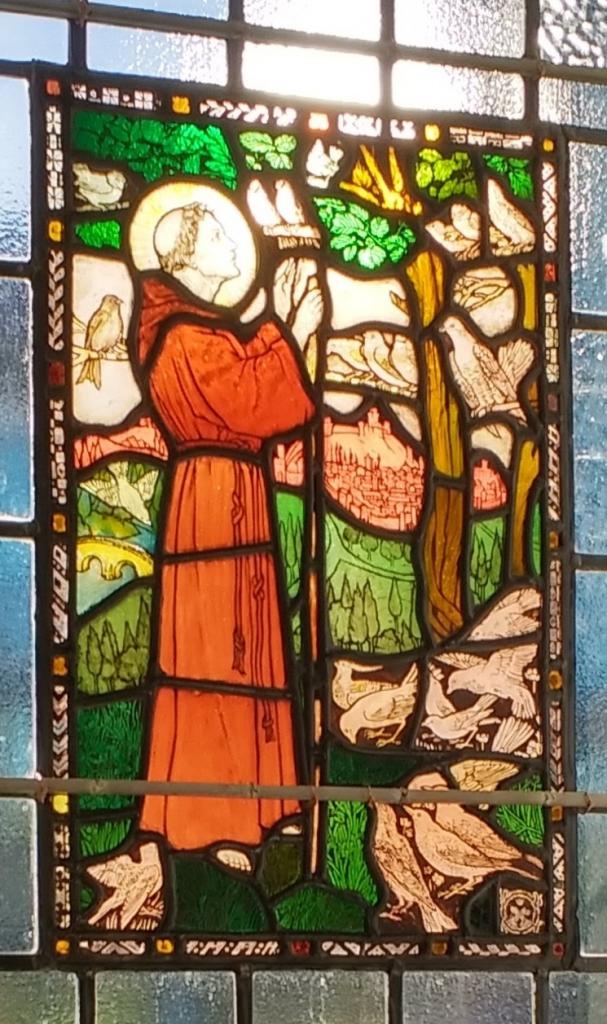 The Parish of St Hugh of Lincoln, Letchworth Garden City, has recently discovered a connection with Margaret Agnes Rope, a stained glass artist from the early decades of the 20th century, who is becoming better known and appreciated. A recent edition in the Catholic Universe featured an article about the unveiling of a plaque on Margaret Rope’s family home in Shrewsbury. Margaret, or Marga as she was known in the family, was born in Shrewsbury in 1882 and educated at home. During her late teens she followed her mother and most of her family in converting to Catholicism. Being drawn to the creative arts, at 18 Margaret went to study art, including the design and creation of stained glass, at Birmingham Municipal School of Art, where she excelled and won many awards. Whilst only in her twenties, she was commissioned to produce the first of seven stained glass windows which she made for the Catholic Cathedral in Shrewsbury.

In 1911 Margaret joined a community of stained glass artists at the Glass House in Fulham, sometimes working with her cousin, confusingly also a Margaret Rope, but known professionally as M.E. Aldrich Rope. Marga was very independently minded; she used to smoke and ride a motorbike. In fact, there’s a story that whilst travelling across the country to visit relatives on that mode of transport, during WW1, she and her sister were briefly arrested, as the authorities couldn’t believe that young ladies could be riding across Suffolk on motorbikes unless they were spies. Whilst working in Fulham, at the Glass House, Margaret designed and produced many beautiful windows for churches around Britain and abroad. Her windows show great skill in glass painting and an intensity of colour and religious feeling.

Always a devout Catholic, in her early forties Margaret felt called to the religious life. She entered a Carmelite Monastery in Woodbridge, Suffolk, though continuing to design stained glass which was sent to Fulham to be made up for her. In 1948 the Carmelite sisters moved to Quidenham in Norfolk, but Margaret’s health gradually deteriorated and she passed away in December 1953, leaving a wonderful legacy of stained glass throughout Britain and around the world, including the windows for the Tyburn Convent, commemorating the Tyburn Martyrs.

Margaret Rope’s connection to St Hugh’s Church in Letchworth comes through a small stained glass panel depicting St Francis of Assisi preaching to the birds. Crafted with great skill and artistry, it shows the saint surrounded by beautifully drawn birds, with an Italian hill village, presumably intended to represent Assisi, in the background. The panel originally came from the first Catholic church in the Garden City, completed in 1908, now the parish hall. It was brought into the new church in the 1960s and since then had been sitting on a rather obscure window sill.

A couple of years ago, there was some research done to try and discover the artist responsible for such a fine work of art. An exhibition of Margaret Agnes Rope’s stained glass, in 2016, at Shrewsbury Museum and Art Gallery, provided the opportunity to contact them, to see if there was any possibility that the panel of St Francis could be by Margaret Rope. The parish was put in touch with Arthur Rope, a relative and great authority on Margaret’s life and work and he, amazingly, found a black and white image of the same St Francis panel in Margaret Rope’s archive of drawings and papers.
Arthur Rope came to Letchworth to view the stained glass panel and contacted Peter Cormack, a leading expert on British stained glass, especially of the Arts and Crafts Movement, who also confirmed the panel of St Francis to be by Margaret Agnes Rope. It is believed to be Margaret’s first commission for a church, before her work on the windows for Shrewsbury Cathedral.

In order to provide the panel of St Francis, by such an illustrious artist, with the prominence it deserves, Fr James Garvey, the Parish Priest of St Hugh of Lincoln, has arranged for it to be placed within a window in the Baptistery, where it can now be more clearly seen and fully appreciated.