A Shrine of the Blessed Sacrament for London 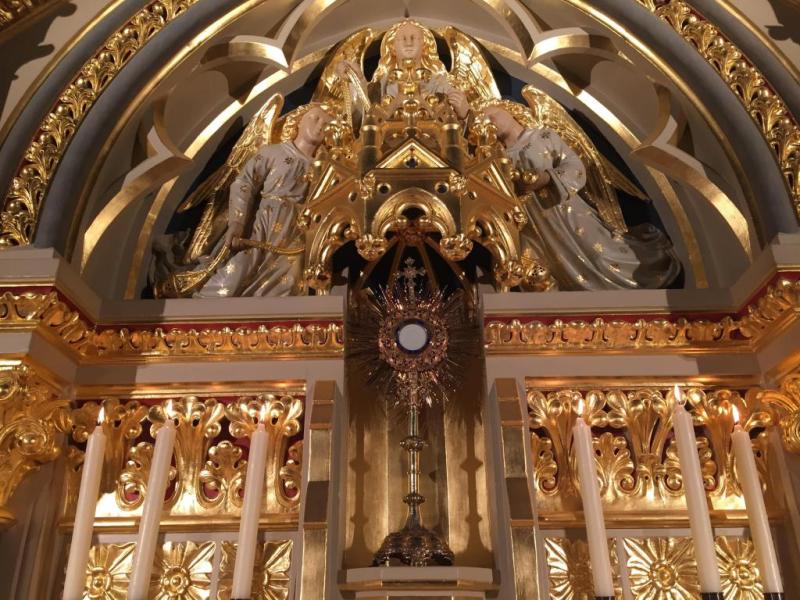 Corpus Christi, the hidden gem in the very heart of Covent Garden, has stood here for over 140 years. To those who have visited: a dark, dusty building, much in need of some love and care, the blackened painted walls more reminiscent of the Victorian smog in which it was built, than the heavenly Kingdom it was meant to portray.

This was not the vision for this building when it was opened. When he preached at the opening Mass on 20th October 1874, Cardinal Manning declared: ‘A sanctuary has been opened to be specifically devoted to the adoration of the Blessed Sacrament.’ This was the first Catholic Church in this land to be dedicated to Corpus Christi after the Protestant Reformation and it was built in reparation for the sins committed against the Blessed Sacrament in those days and in the centuries that followed. Cardinal Manning opened the church to reaffirm the beating heart of our Catholic life, the Mass, i.e., the earthly reality and presence of the Body and Blood of Christ.

Corpus Christi soon became a centre for Eucharistic devotion, and many well-known names are connected with this historic church. The hymn much loved by English-speaking Catholics around the world, Sweet Sacrament Divine, was written by Fr Francis Stanfield, Parish Priest of this church in the early 1880s. Mgr Ronald Knox preached at the 40-hour Devotions every year for nearly 30 years. His famous sermons were later compiled in the books Between Heaven and Charing Cross and Window in the Wall.

Cardinal Manning's successor, Cardinal Vincent, requested that Corpus Christi become the jewel it was designed to be, the Eucharistic Shrine of the diocese. After a great deal of restoration work over the last few years, the church is now refurbished, particularly the sanctuary, with fresh colouring and shimmering gold leaf. The sanctuary has been restored to resemble the inside of a tabernacle, the gold wall signifying the majesty of the throne upon which Christ reigns over the universe. Three angels sit over the tabernacle with thuribles of burning incense, reminding us of God’s transcendence and that, in the sacrifice of the altar, heaven and earth are intrinsically linked. In the words of the Second Vatican Council, it is here that ‘we take part in a foretaste of the heavenly liturgy’ which is to come.

The way the sanctuary leads our eyes to eternity reminds us that we do not come to God alone. When we approach the altar, we join ourselves with the countless angels, saints, thrones and dominions who praise and glorify God on high. It is here that the entire cosmos joins together as one in worship of God. As Cardinal Ratzinger reminds us in his book Spirit of the Liturgy, ‘the cosmos is not a kind of closed building’ or ‘a stationary container’ but rather a movement towards our creator.

And so, the building work is over but the real work is about to begin. For here is the shrine, to encourage and promote devotion and love for our Saviour in the Blessed Sacrament: to help revitalise Eucharistic evangelisation, the heart of our life.

Almost two years ago we launched the Sodality of the Blessed Sacrament, which encourages devotion to the Mass and the Eucharist. The Confraternity is open to new members who wish to join with currently over 300 members worldwide. A Mass is celebrated on the first Thursday of the month, and is offered for the intentions of all members. At these Masses there is a different guest preacher who offers a reflection on distinct aspects of the Blessed Sacrament.

All members receive these homilies and other Eucharistic catechesis in a monthly newsletter together with a sodality badge in the shape of a monstrance.

At Corpus Christi, we’re encouraging you to arrange bringing members of your parishes on pilgrimage to the Diocesan Shrine: First Holy Communion groups, school visits, Confirmation candidates, any other groups or individuals. You can celebrate Mass here, Exposition, Benediction, a procession of the Blessed Sacrament, a tour: any or all of it can be arranged, to help people feed their faith. If you can’t visit in person, Mass can be offered at the shrine for your intentions: or you can have a lamp burning in the sanctuary for one week at a time before the Blessed Sacrament. All of these things, and joining the Sodality of the Blessed Sacrament, can be arranged by clicking on our menu tab ‘Get Involved’ on our website.