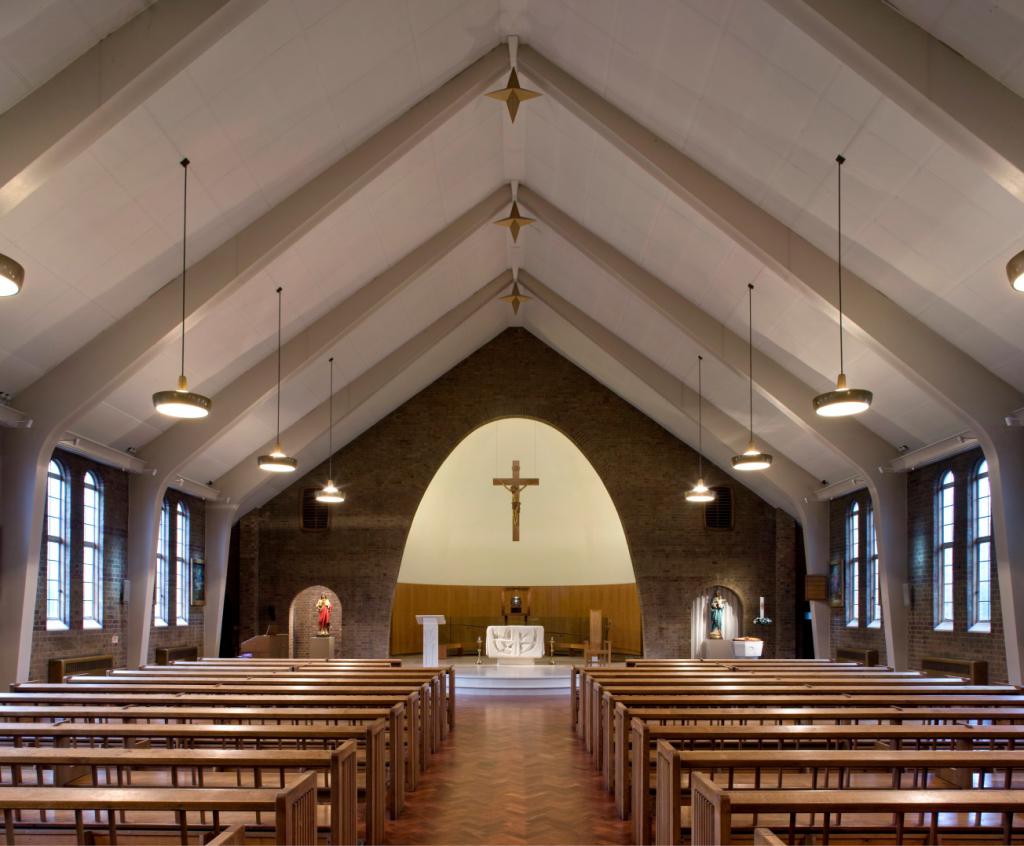 Please see below four recent projects for church re-orderings with which the Committee has been involved. All four projects demonstrate the benefit of a continuous dialogue between the parish and the Art and Architecture Committee.

This project involved more than just the re-ordering and decoration of the church. The basement was excavated to provide sufficient space for the many pastoral activities undertaken by the parish. The project architect, Javier Castanon began the project for the church with a painstaking analysis of the church's design and decorative history. The architect quickly recognised that the interior of the church had undergone four schemes of decoration within the space of fifty years, and obviously none of the previous schemes had proved satisfactory. This gave the architect the opportunity to think creatively within the High Renaissance tradition of the church to propose using faux yellow ochre marble on lower part of the apse wall to mirror the real marble already there, to add a new marble floor for the nave, and to have the pilasters painted to look like travertine. The architects took a modern approach with regard to lighting by designing bespoke pendant fittings of thin steel tube that did not clash with the interior nor flood out the architectural detail of the church ceiling. The original architect John Kelly had utilised many historical precedents to create his interior and the restoration brought out the ingenuity of the original design without a sense of pastiche. 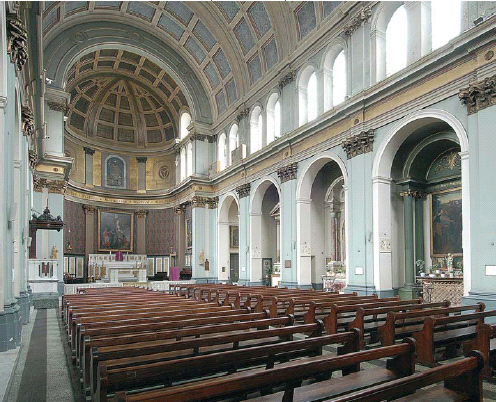 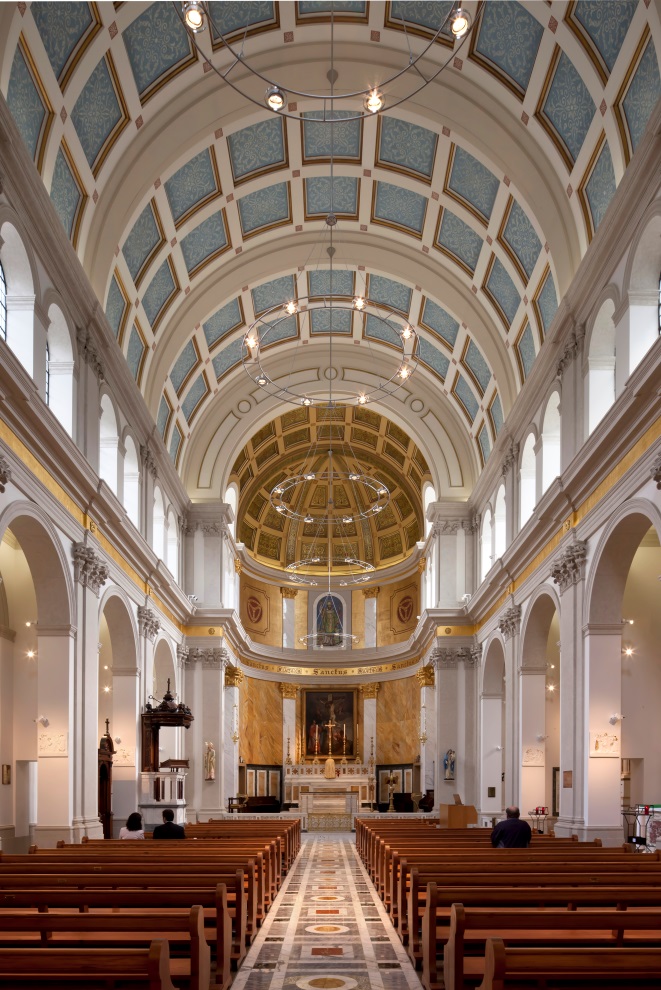 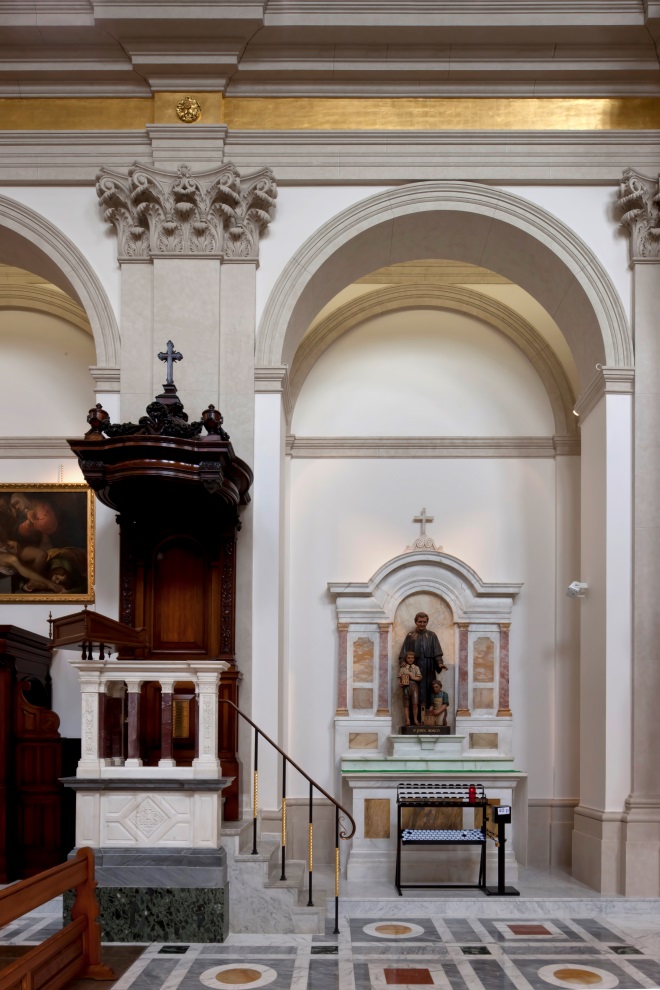 This church, like so many early Christian basilicas, is a simple brick shed with apse attached to the east end. The church was constructed after the Second World War as part of the national war damage rebuilding scheme. The brick chancel arch formed the original threshold between the sanctuary and nave. This sharp contrast was considered unsuitable for the celebration of the Novus Ordo by the 1980s. The sanctuary became a brick island extending into the nave to bring the altar nearer to the people. Reservation of the Blessed Sacrament was moved into a side chapel, and the president’s chair elevated into a prominent position. The lectern was placed halfway between the altar and president’s chair. This re-ordering was typical of schemes undertaken from the later 1960s to late 1990s. The re-ordering of the first re-ordering has kept but refined elements of the 1980s scheme: the sanctuary extends into the nave, but the lectern and president's chair are now located in a more traditional manner.  The tabernacle has been returned to the centre of the church, and the processional route onto the sanctuary allows for disabled access without notice. The use of timber veneer on the back wall of the apse brings a sense of warmth and tranquillity to the church. 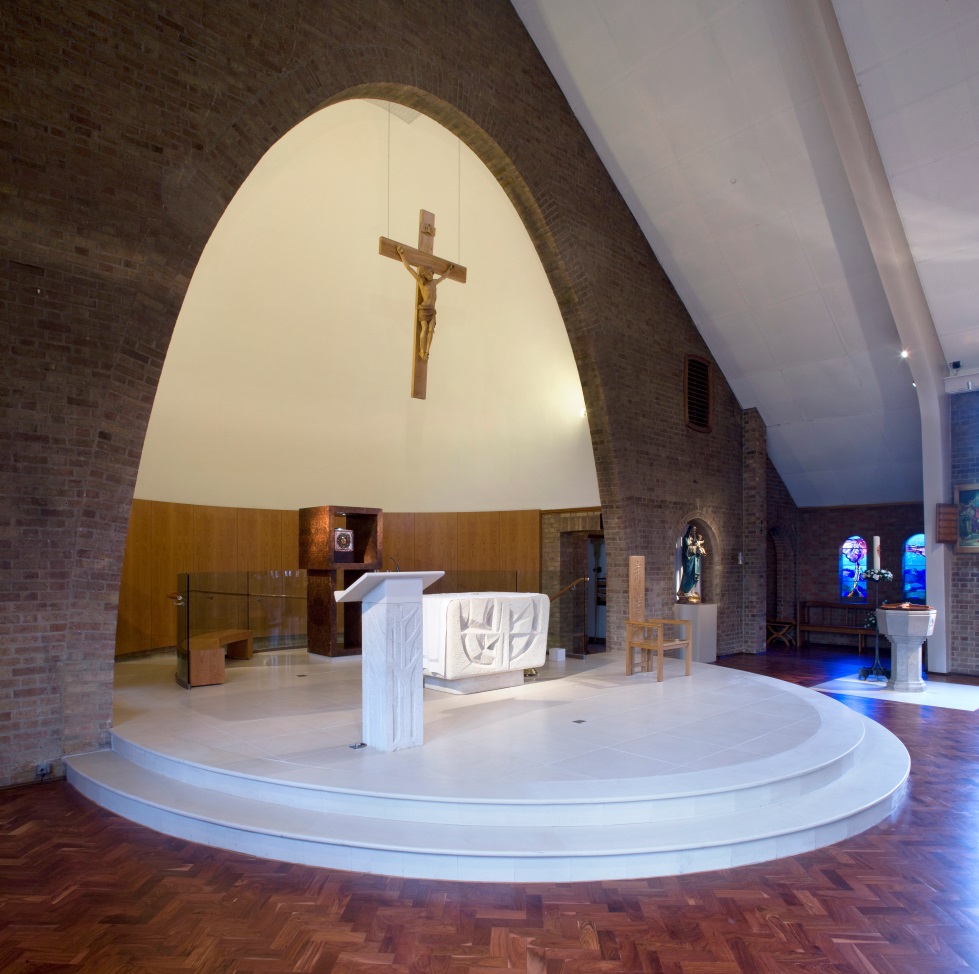 The original church was consecrated in 1967, two years after the closing of the Second Vatican Council, and on the cusp of the implementation of the Revised Roman Missal. This church is similar to many of the period which were built to provide the largest possible space within a limited budget for the new waves of Catholic immigrants. The building is of its time and demonstrates many of the key features of modern architecture:  truth to materials in the raw concrete columns; the form of the building clearly follows the function with the emphasis on clear sight lines from the nave to the sanctuary. The emphasis is very much on the church as the People of God gathered together for worship. The original architect has learnt from the masters of the modern movement: the stained glass windows above the nave walls allow the pitched roof borne aloft by concrete ‘tree trunks' to float above the walls, a statement in concrete of the primordial religious building of the Jewish/Christian tradition, the tent of meeting. The large blank apse wall is reminiscent of the contemporary desire to create an apophatic architecture that rose above confessional discord. The re-ordering respected the intentions of the original architects, and so the concrete was cleaned, new lighting added, the sanctuary reconfigured and most distinctly a large back-lit stained glass roundel was fixed onto the back wall. This was a bold attempt to confront the scale of such a formidable back wall. 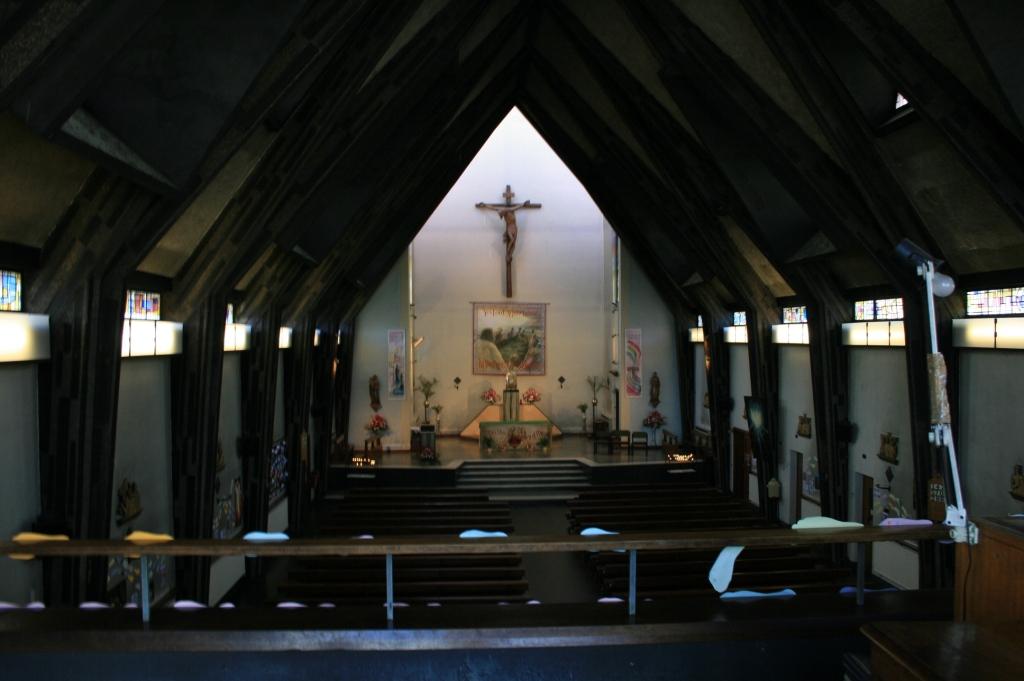 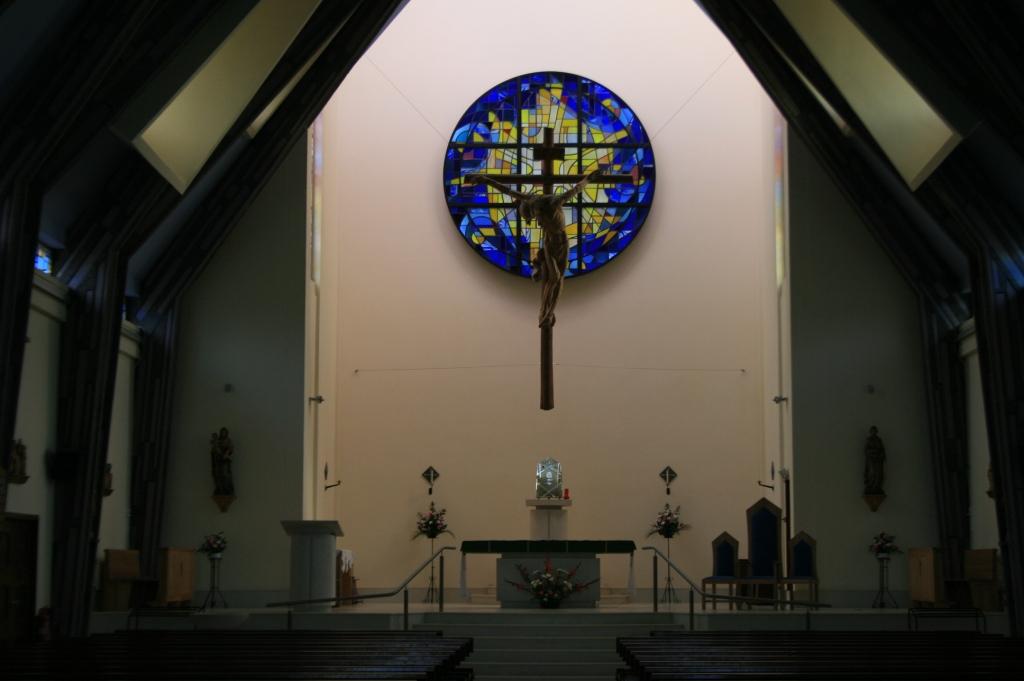 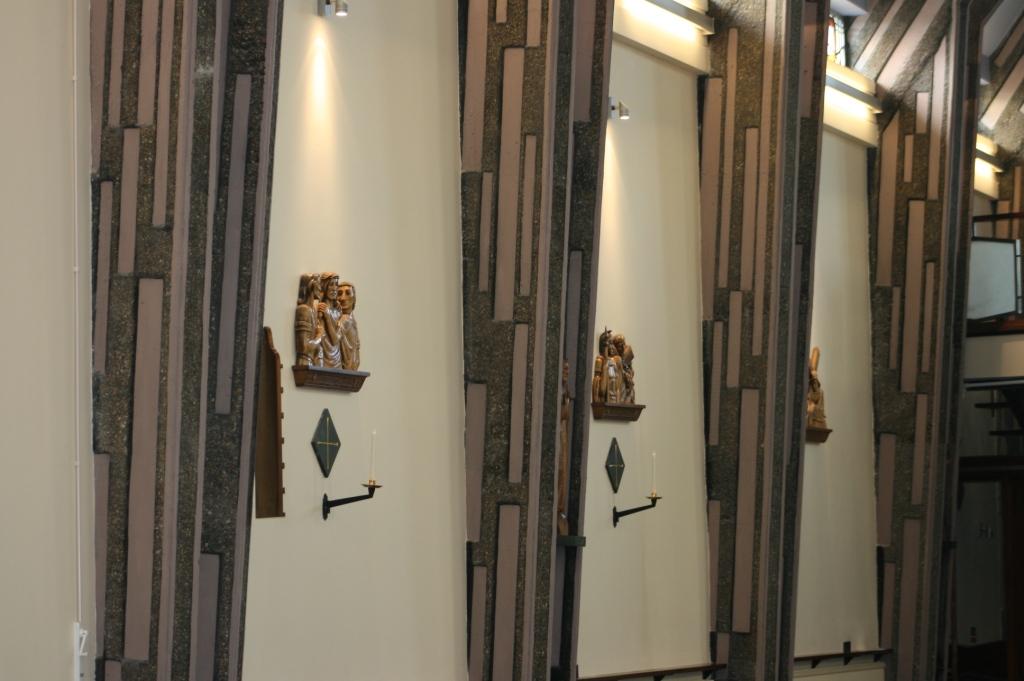 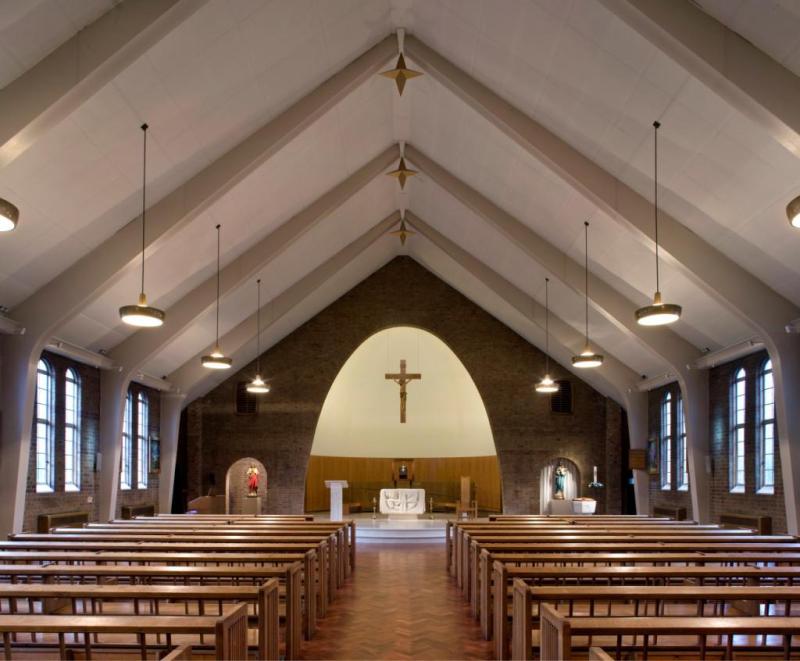 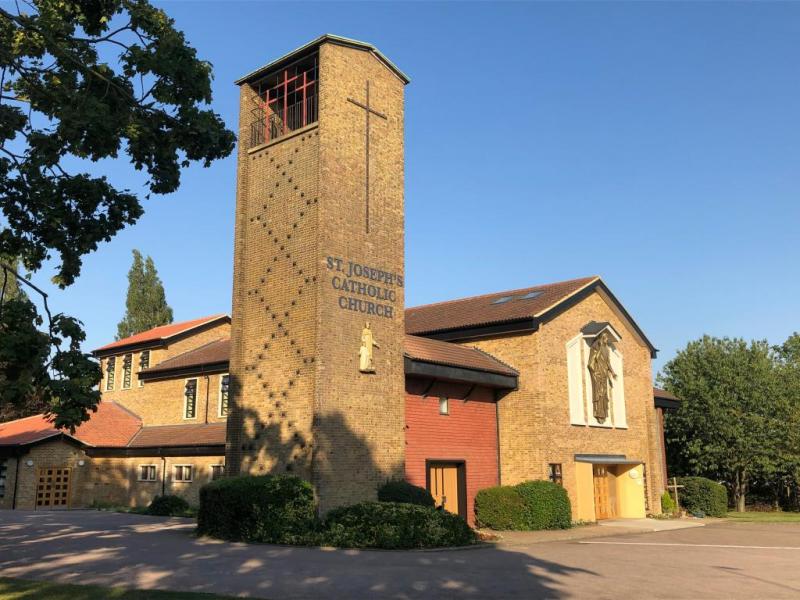 Guidelines for Alterations to Churches 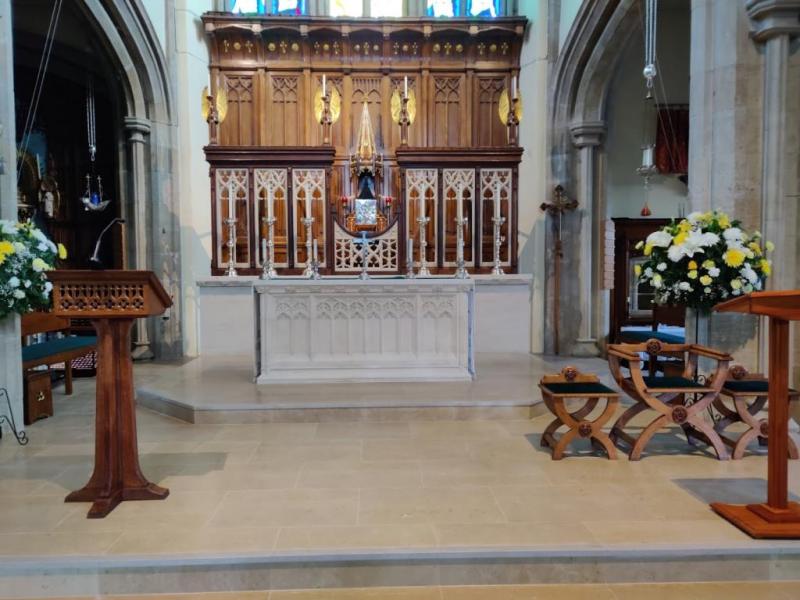 Members of the Committee