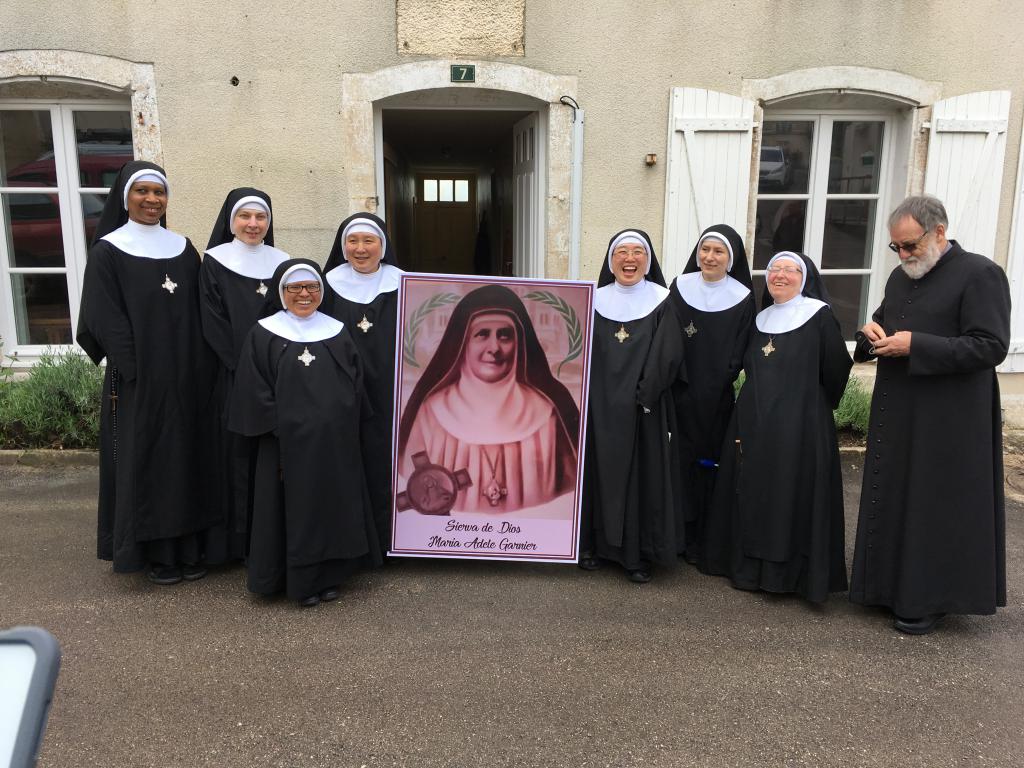 3rd December 2016 will be a significant date in the history of the Tyburn nuns. It was on this day that the initiation ceremony for the cause for Mother Marie Adele Garnier, the foundress of the order, took place at the monastery in Saint-Loup-sur- Aujon. Providentially, on the same day, Mother Marilla, the Mother General of the congregation, was told that the childhood house of Mother Marie Adele was up for sale in the nearby village of Grancey-le-Château, which the orger susequently purchased.

It was also on that date that Mother Marilla decided to organise a pilgrimage in honour of the foundress, which would have as its climax the first Mass to be celebrated in that very same house.

The pilgrimage started on 4th May 2018 at Tyburn where Mother Marie Adele Garnier died and is buried. For the community there 4th May, the feast day of the English Martyrs is an important date. The Shrine of the English Martyrs is housed at Tyburn Convent, with the community serving as its guardians. The pilgrims attended the traditional Ceremony of the Rose which commemorates the martyrdom of 20 Carthusian monks from 1535 to 1540. A red rose, representing each monk, was laid on the altar in the crypt to remember their sacrifice. In a splendid witness to Christian unity, the current Anglican community residing at Charterhouse were also present. Later that the day, the pilgrims would gather to pray around the plaque marking the place where the Tyburn Tree stood at Marble Arch.
The pilgrims set off for France the next day taking the reverse route that Mother Marie Adele Garnier took to England in 1901, having left France with her fledgling congregation because of anti-religious laws.

In Paris, the pilgrims ascended the steps to the Sacred Heart Basilica in Montmartre, praying the Rosary as they went and carrying the banner of Mother Marie Adele, which had come from their monastery in Peru. It was Mother Marie Adele who was responsible for establishing perpetual Eucharistic Adoration here and it was in the crypt of St Peter that Mother Marie Adele made her final religious profession at the sprightly age of 63, just a few days before leaving for England.

The following day the pilgrims continued to Pontmain via Chartres and Laval. Mother Marie Adele spent her early adult life in the region as a governess and would have visited the impressive 12th century cathedral at Chartres where the first century relic, the veil of Our Lady, is kept.
The apparition in 1871 at Pontmain was a defining moment in the life of Mother Marie Adele. She was one of the first to visit the village after the apparition was reported. After speaking to the children who had witnessed it and gaining a description of the lady who had appeared, using her artistic skills, she created the image that became the official version of the apparition.

The pilgrims then proceeded to Mont St Michel. Mother Marie Adele had a strong devotion to St Michael and it was under his protection that she placed her young congregation.

It was then onwards to Lourdes. Mother Marie Adele considered herself blessed with ill health. She went to Lourdes, which would have been in its infancy as a shrine, not to seek a miracle but rather to receive strength to bear her suffering as Christ bore his. The pilgrims prayed at the Grotto, attended Mass, and participated in both the Eucharistic Procession and the Torchlit Procession.

On the route from Lourdes to Saint-Loup-sur-Aujon, there was an overnight stay at Espace Bernadette at Nevers, where the body of St Bernadette is displayed.

The next day the pilgrims’ spirits were noticeably buoyant as they started on their journey to Saint-Loup-sur-Aujon where a small community of the Tyburn nuns settled several years ago. Such was the warmth and enthusiasm from the nuns and the pilgrims on arrival, that it was difficult to work out which group was more pleased to see the other!

The next day saw both nuns and pilgrims strike out for Dijon, where Mother Marie Adele had spent some of her teenage and early adult life. The trip continued to the monastery at Citeaux, a centre of monasticism for many centuries; it is difficult to believe that it would not have exercised some influence on Mother Marie Adele when she lived in the area.

The following day saw the pilgrimage reach its climax in Grancey-le-Château. The pilgrims and nuns processed into the village, singing hymns and carrying the banner high. They assembled outside the childhood house of Mother Marie Adele, which was due to be consecrated as the House of our Lady of the Assumption on 15th August. Even though the work of refurbishment was not finished, Mass was concelebrated in the chapel by Fr John Roberts, the pilgrimage chaplain from New Zealand, and Fr Alain Margerard, chaplain to the nuns at Saint Loup. The pilgrims enjoyed a tour of the castle where they visited the chapel where Mother Marie Adele was baptised.

In the evening, the pilgrims made a presentation to Mother Marilla of a gold and silver depiction of the Last Supper, along with a plaque expressing the pilgrims’ thanks to her and commemorating the first Mass in the house at Grancey-le-Château.

The next day, the pilgrims bade farewell to the community at Saint-Loup-sur-Aujon and made the journey back to Tyburn, where we all gathered around the tomb of Mother Marie Adele for a final prayer.

One of the pilgrims wrote afterwards: ‘It truly was a once-in-a lifetime experience, especially the visit to Saint-Loup-sur-Aujon and Grancey-le-Château. A bonus was meeting new friends from many countries and six continents!’ There will be no pilgrim that would disagree with those sentiments.