From Douay to Allen Hall 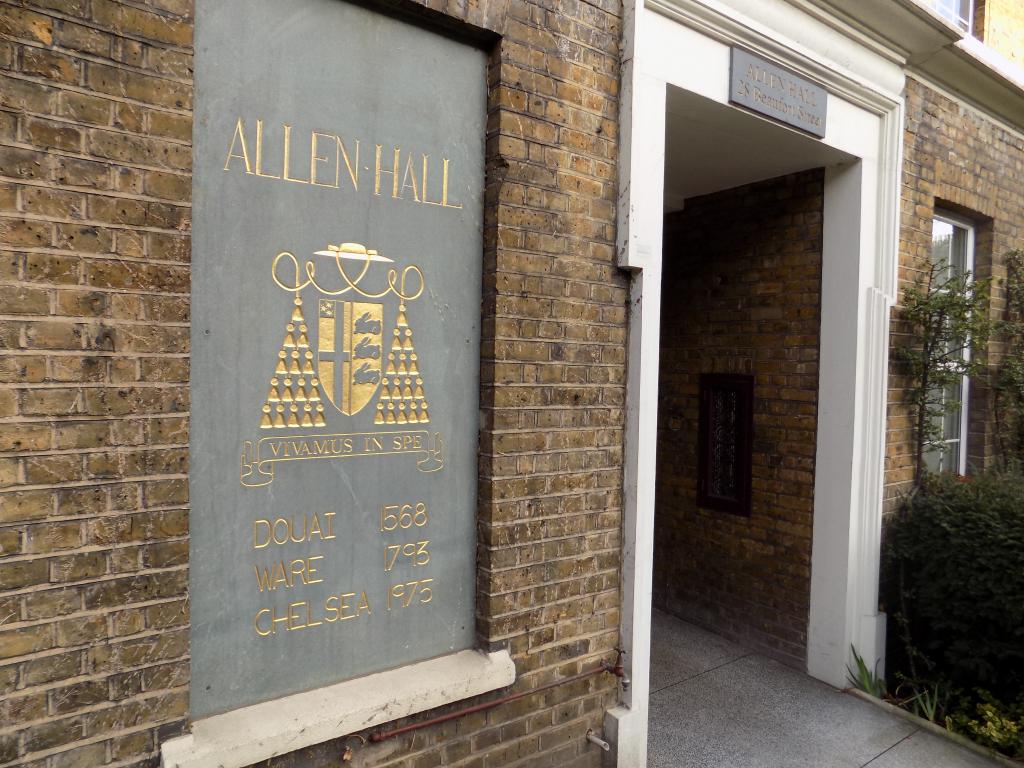 This year we celebrate the 450th anniversary of the foundation of the English College at Douay (France). Established by William Allen at Michaelmas 1568 it was one of the first seminaries to be opened north of the Alps and it produced a new generation of priests who helped ensure the survival of English Catholicism.

Douay seemed a good location for a college: situated near the English Channel, its university had just received a charter and the town was already home to many English Catholic exiles. Despite poor beginnings and a temporary move to Rheims due to the Dutch Wars (1578-93), the College managed not only to survive but to flourish. It combined elements of a university, seminary and school; for while the College started with mature scholars studying either in house or at the university, it was soon providing younger students with a full education and producing priests for the mission.

The seminary syllabus was adapted to suit future missionaries in Protestant England. Much attention was paid to preaching, disputation and the study of Scripture. The College even sponsored an English translation of the Bible. The New Testament was produced in 1582 and was one of the sources used by the translators of the King James Version. The Douay-Rheims remained standard among English-speaking Catholics up until recent times and is a testament to the forward-looking vision of the College: the New Evangelisation Elizabethan style.

The ‘seminary priests’ produced by Douay were highly trained in theology and controversy, and eager to return to his homeland, despite the obvious dangers. In 1577 St Cuthbert Mayne became the first of them to be martyred. Nearly two-thirds of Douay priests were imprisoned at some point and a total of 116 were executed during Elizabeth’s reign.

The English College remained at Douay until the French Revolution, when it had to be evacuated. Some students managed to escape home; others, immortalised in College lore as the Trente-deux, faced a period of imprisonment at the citadel of Doullens. The bishops were forced to arrange an emergency plan to replant Douay on English soil. Due to disagreements between the bishops, ‘England’s College home’ came to be set up in two locations: at Crook Hall and then Ushaw near Durham, and at the pre-existing school at Old Hall Green, Hertfordshire, which was re-constituted as St Edmund’s College (1793). Within six years an impressive range of buildings had been built, which in the opinion of architectural historian Nikolaus Pevsner were ‘an enterprise comparable in scale only with College work at Oxford and Cambridge, but far exceeding what English public schools did at that time.’

St Edmund’s was slowly consolidated over subsequent decades. In 1845 Bishop Thomas Griffiths commissioned Augustus Welby Pugin to produce plans for a new college chapel in the neo-gothic style. By the time it was opened in 1853, both Griffiths and Pugin were dead, but it ranks as one of that architect’s masterpieces, a true ‘dream in stone’.

The story of clerical formation in Westminster saw many changes in subsequent years. In 1869 Archbishop Henry Edward Manning set up a new seminary in Hammersmith, St Thomas’, in the buildings now used as Sacred Heart School. He had long had his doubts about the dual education system at St Edmund’s, inherited from Douay, and wanted a seminary near the heart of the city.

Herbert Vaughan, who succeeded to Westminster in 1892, closed down St Thomas’ Seminary and established what he hoped would become a national seminary at Oscott. It was under Francis Bourne, however, that the seminarians returned to St Edmund’s in 1904, to the new Allen Hall. In 1922 he organised the school into houses, one of which, named after Bishop Douglass, was reserved for ‘church boys’ and constituted a minor seminary. For the Divines, there were several eminent names on the teaching staff during this period:  Ronald Knox, Adrian Fortescue and even the young Fulton J Sheen (later to become an Archbishop and leading TV figure).

In 1968 it was announced that the seminary was actively seeking a new home once again in order to be nearer to the London parishes and universities, essentially a return to Manning’s policy of 1869. The new Rector had the aim of moving the seminary by 1970. In actual fact the move took place in July 1975 to a former convent on Beaufort Street, Chelsea, close enough to the cathedral and standing on the site of St Thomas More’s ‘great house’.

If William Allen visited Allen hall today, he would, of course, be astonished by the many developments in clerical formation and teaching methods but he would also recognise that the Douay tradition continues nearly five centuries later. The ‘seminary priests’ of today are called, just like their predecessors, to bring people to Christ, to boldly evangelise using the latest means and to form missionary-minded communities.