Celebrating the Closing of the Year of Consecrated Life 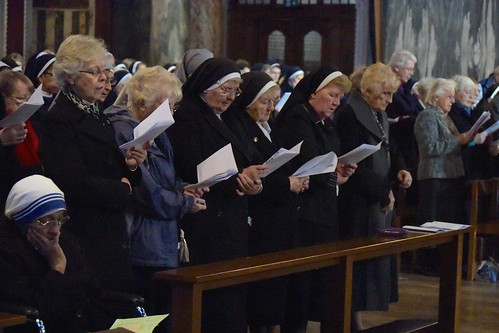 On the Feast of the Presentation, 2 February 2016, Cardinal Vincent celebrated the annual Mass for Consecrated Life. Coming at the closing of the Year of Consecrated Life, it was an opportunity to celebrate the role of all consecrated men and women in the diocese, in the context of the Jubilee Year of Mercy.

At the start of Mass, Cardinal Vincent paid tribute to Sr Amadeus Bolger, who recently retired as Vicar for Women Religious, for her many years of dedication and service. He thanked Fr Robert Marsh OSA, for his ministry as Vicar for Religious for the diocese.

The Cardinal also acknowledged all religious who were celebrating silver, golden and diamond jubilees.

In his homily, he spoke about Fr Engelmar Unzeitig, a Czech priest who was declared Venerable by Pope Benedict and a martyr for the faith by Pope Francis. From his fearless defense of the faith in the face of Nazi atrocities to his selfless service of his fellow inmates in Dachau, Fr Unzeitig's life is 'a marvellous picture of mercy in action,' said the Cardinal.

'As we continue to explore the greatness of God's mercy we do well to remember that the most eloquent account of mercy is to be found not in words but in actions.'

He went on to explain: 'I wanted to share this narrative with you today because it speaks so eloquently of the beauty and generosity which lies at the heart of consecrated life.'

The Cardinal then thanked 'God for the mercy filling the lives of  so many religious men and women, who today rededicate their lives to God'.

He thanked them for their faithfulness for radiating the light of the Lord and invited them to 'pass [God's mercy] on to others, being consecrated messengers of mercy, in our world today.'

The full text of Cardinal Vincent's homily can be read here.