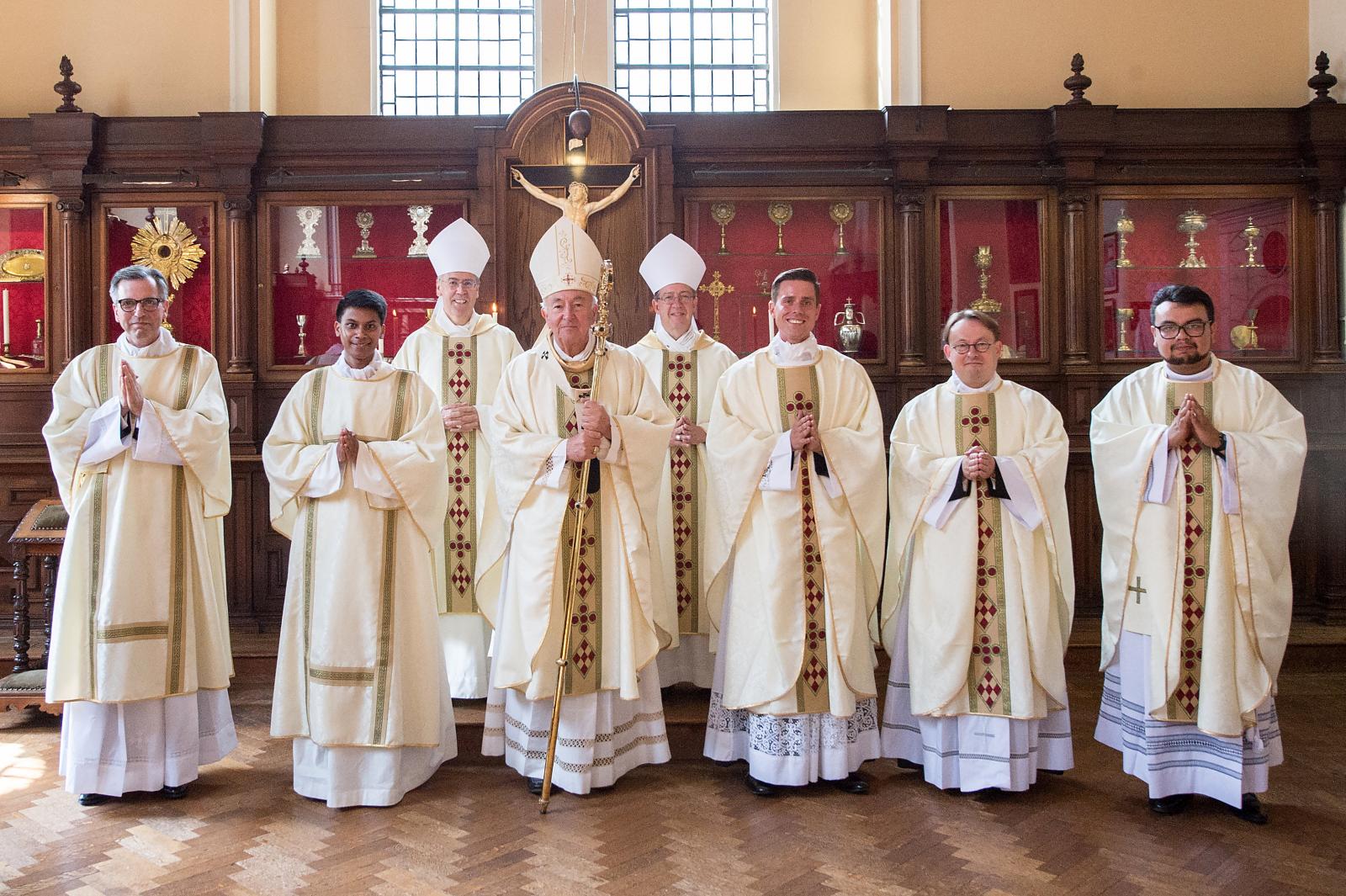 On Saturday 19th September 2020, Cardinal Vincent ordained two men to the diaconate and three men to the priesthood in Westminster Cathedral. For the first time since July 1999, priests and deacons were ordained together in one celebration, 'under the restrictions of the pandemic'.

The Cardinal used this occasion to reflect on the Sacrament of Holy Order in his homily. It is one Sacrament, he said, expressed in three degrees, shared by deacons, priests and bishops: 'this Sacrament conforms its recipients to Christ, the Head of the Church. In his name, those who share this Sacrament are commissioned to maintain and develop order in the life of the Church.'

This order is based, not on a command structure, but on humble service: 'Service is the permanent and underlying foundation of all that is done by deacon, priest and bishop.'

It is shaped by a 'humble discernment of what the Lord is asking of us; a discernment carried out in the context of the Church and with total fidelity to its Master; a discernment, therefore, guided by its Head and by those who are ordained into a sharing in the mission of Christ the Head,' he said.

In an age of self-definition and self-entitlement where rights are to be 'demanded and defended' and 'entitlements pursued, he said that this is 'a temptation we face' and cautioned that a 'culture of entitlement has no place among us'.

He prayed for the candidates that their diaconate may 'always give their ministry its fundamental quality of generous service', and for those being ordained to the priesthood 'as their hands are anointed to serve the people in holiness of life and holiness of order, in humble service and daily commitment'.

After the homily, the Cardinal proceeded to ordain William Johnstone and Tim Mangatal to the diaconate, and Alexander Balzanella, David Knight and Axcel Soriano to the priesthood.

Some elements of the celebration were modified as a result of the pandemic restrictions. Only the Cardinal, Bishops John Sherrington and Nicholas Hudson, and only a handful of concelebrating priests  laid hands over the heads of the candidates. Similarly, the sign of peace was given by the Cardinal to the newly-ordained priests and deacons on behalf of all the clergy and people.

During the Liturgy of the Eucharist, the paten and chalice used by the Cardinal were those presented by Pope Benedict XVI on his visit to the Cathedral 10 years ago.

Each of the newly ordained priests were presented with an individual chalice and paten for their use during the Mass, with each set having a particular historical significance.

Fr Alexander Balzanella, who was in formation at the Venerable English College in Rome, was presented with a late fifteenth century English silver gilt chalice, given by the Swaything family. Its stem is engraved with a trellis, and the knob set with the letters MARIA, and a rose. It honours the memory of the many martyrs of the English College.

Fr David Knight was presented with an English silver gilt chalice, dating from 1529. The cup is engraved with part of one of the prayers before Communion in the Sarum Missal. It has a hexagonal stem with twisted ropework. This chalice was used for many years prior to the liturgical reforms of Holy Week in the 1950s and 1960s in the procession to the Altar of Repose on Maundy Thursday. It was presented to the Cathedral by Baron Antonio French and his sisters.

Fr Axcel Soriano was presented with an English recusant silver gilt chalice, made around 1680, and engraved with leaves and the Crucifixion. Faces of cherubs adorn the knob.

Please keep these priests and deacons in your prayers.