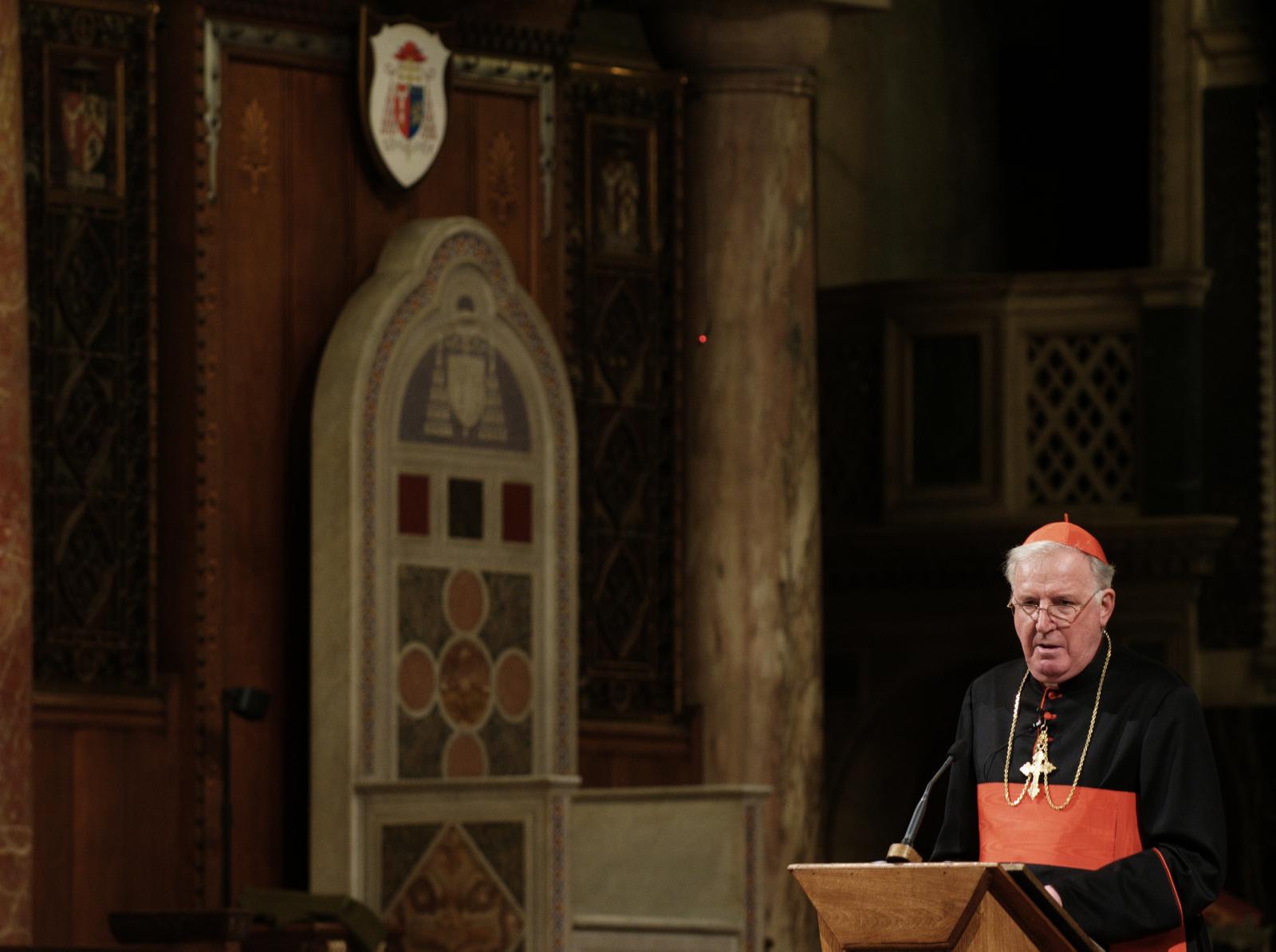 This article originally appeared in the December 2016/January 2017 edition of the Westminster Record.

On 28 October 2016, Cardinal Cormac Murphy-O’Connor celebrated the diamond jubilee of his priestly ordination. On the occasion of this milestone, the Cardinal took time to talk about his family, his vocation and some of the highlights of his ministry.

Coming from a very Catholic family with uncles who were priests, it is perhaps not surprising that he might have considered a vocation to the priesthood.  ‘I remember one occasion when I was 15 going out with my father, who was a doctor, on his calls, when he turned to me and asked “what do you want to be?” and I said I wanted to be a priest,’ he explains.

‘I had thought about being something else: a doctor, like my father, or a musician, or in today’s terms perhaps even a DJ!’ (The Cardinal is well-known for his musical talent, especially at the piano, entertaining family, friends and the faithful alike.)

With a strong culture of vocations in the family, there are doctors, teachers, lawyers and business people in the Murphy-O’Connor family. The Cardinal adds, ‘I would have liked to have been a teacher. It’s a very noble profession and a demanding one.

‘Teachers and priests are similar in that they both have the task of forming people. My nephew, who is a teacher and a very devout Catholic, sees the wholeness of education: forming the whole person for the greatness of life.’

And yet the call to the priesthood was stronger, having expressed his wishes to his father at 15, he says, ‘I never really deviated from that by the time I left school at 18. I was convinced I wanted to be a priest.’

He is careful to point out, however, that ‘one mustn’t be dramatic. I wanted to be a priest because I thought that’s what God wanted me to do. I didn’t have a revelation, a Damascus moment. In the providence of your life, if you feel that God was there, that it has a meaning and a purpose for you, then it’s what God wants you to do.’

During his time as Rector of the Venerable English College, he adds, ‘those who were coming forward for the priesthood were those who said their prayers every day and were always doing something in the service of others. There was already a basis there.’

His first appointment as curate in Portsmouth was in a very poor parish, where most of the people were workers in the dockyard or widows from the War. ‘I had a lot to learn,’ he explained. ‘A lot of these people were very lapsed. I learnt that there was no point in asking why they didn’t come back to Mass.’

‘Gradually I evolved the idea that, to get people who had been baptised back to church, we had to get them meeting with other Catholics to learn about the faith of the Church. Before celebrating the sacraments, you have to have faith in God, which you learn about in the Scriptures and from other people.’

In time, then-Fr Cormac also started courses for non-Catholics wishing to know more about the faith, which was ‘very successful’, as well as a youth club. When he moved to another parish after four years, he started 10 groups. ‘It revolutionised the parish,’ he explained. ‘It became a living parish with about 250 people participating in these groups.’

During his time in Portsmouth, members of the Catholic Evidence Guild would regularly speak about the faith in Southsea. ‘So, I went down and joined them and decided I would get up and talk about the faith,’ he recalled. ‘There was a big crowd and the chap before me was excellent. To my horror, when I started speaking they started moving away because they became bored. That taught me a little bit.’

Indeed it is a lesson that he put to great use, as those who have heard him preach or give a speech over the years can attest. He is well-known for his humorous stories that capture and hold the attention of an audience or congregation.

‘I was fortunate,’ said the Cardinal. ‘I had about 10 years in parishes. You learn such a lot about people, their lives and their difficulties. To know all is to understand all is to forgive all.’

He explains that contact with parishioners was very precious: ‘I realised I needed them, married and single people, to be a priest; and they needed me to make sense spiritually of their lives. Seeing people on a personal basis, sometimes in difficult circumstances and at other times in happy situations, meant a lot.’

He relates the story of a married couple who were childless for 10 years, who came to see him to share some good news. ‘They came back hand in hand to say that a baby was coming. These are the small things that gave me great joy.’

There were sad times too when he accompanied people as they were dying or families in their bereavement. ‘You get to see the will of God or the providence of God in everything.’

‘The most worthwhile thing about being a priest,’ he added, ‘is about being with people.’

He explained that ‘the best parish priests are those who let others do the work. Somehow, you have to be the spiritual leader of an orchestra where everyone has a different part to play.’

Commenting on how things have changed in the Church, the Cardinal said: ‘I think there was a lot of what I would call “folk religion”. A lot of people went to Mass out of habit. I think this folk religion is gone for the most part. People who come to Mass now come because to a greater or lesser extent they believe.

‘We had a huge number going to Mass in those days, about three or four million. Nowadays, it’s closer to one million. Does this spell disaster? No, I think it just speaks of different circumstances.’

He recalled that ‘Pope Benedict, in his last speech, spoke of the Church as the Barque of Peter. Sometimes there are stormy seas, sometimes it is balmy and sunny, and sometimes one thinks that God is asleep. He finished by saying that it is not our Church, but his Church, and he will never let it sink. The Catholic Church with all her storms and troubles will continue. She will always be there. She might become weaker in Europe and stronger in other continents, but she will be there until the end of time.’

The Cardinal also observed that there have been parallel changes in society: ‘We’re in a different time. In those days, we could still call ourselves a Christian country. People were taught the Lord’s Prayer at school. They would still doff their cap when a priest passed by or put the blind on the window if someone along the street had died. It’s these little things which are now gone.

‘That’s why community is so important today. We have to make communities today.’

He added that, through the years, he has ‘learnt to be a priest among Catholics and ecumenically among Christian communities, and among people who are not religious’.

Quoting Julian Barnes, who said, ‘I don’t believe in God but I miss him’ in his memoir, Nothing to Be Frightened of, the Cardinal observes that he often meets people who ‘are not particularly Christian, but they are not atheists’. He finds few atheists, but many agnostics.

When encountering people of no faith, he reiterates the importance of being respectful: ‘It’s not about saying I can prove the existence of God, but acknowledging that there is something in each person that looks for meaning, some hope in life. And, of course, as Catholics we believe there is.’

That yearning was evident in a debate at the Albert Hall to commemorate the 250th anniversary of the Royal Society of Arts in 2004. Each of the prominent speakers was invited to address the audience for 10 minutes about the contribution of the Enlightenment to their particular area of expertise, such as science, philosophy, the arts, and so on. As the last to speak, the Cardinal pointed out that the others had not addressed the whole person or the meaning of life.

Afterwards, the questions that came from the audience were all about this search for meaning, demonstrating that ‘these things still resonate. People are always searching for meaning and hope. It’s the way we approach people today about faith, and about how we face up to suffering and death, that matters.’

Among the things he counts as most precious in life is the family: ‘The family is absolutely crucial,’ he said. ‘The greatest evil of life today is the break-up of families. It has such an effect on the children. The work we do to try and hold marriage together is hugely important.’

Through his years of accompanying married couples, he has observed that after 10 to 12 years of marriage and a couple of children, many run into difficulties. ‘I used to tell them to hold out together. Over time, they would see life changing and gain a new perspective on their situation. With the arrival of grandchildren, couples begin to see a different side to life.’

The Cardinal credits his own family, as well as his faith and friends for weathering the storms of life: ‘I think it’s very simple: family, faith and friends. You’ll always find the cross in life in ways that you hadn’t expected. Even during those times when you don’t get a result, you realise through it all that the Good Lord was there in the community of the Church.’

Twenty-eight members of his family joined him in Rome to celebrate his Jubilee: ‘We met the Holy Father, who said, when you get older, you become wiser and more compassionate: wiser because you learn from other people and your experiences of life; more compassionate because you understand more, therefore you forgive more, and you learn that you need to be forgiven yourself for your own faults and weaknesses. Wisdom and compassion are the good qualities that good priests have as they become older.’

‘I’ll tell you what else you need,’ he added. ‘Patience and perseverance: As I was setting off to Rome to start my formation at the seminary all those years ago, I went to see my parish priest to ask him for advice. I thought he’d say, “the harvest is great and the labourers are few”, but he didn’t. Instead, he just said, “pray for perseverance”. I thought it was very boring advice at the time, but it has proved to be very true.’