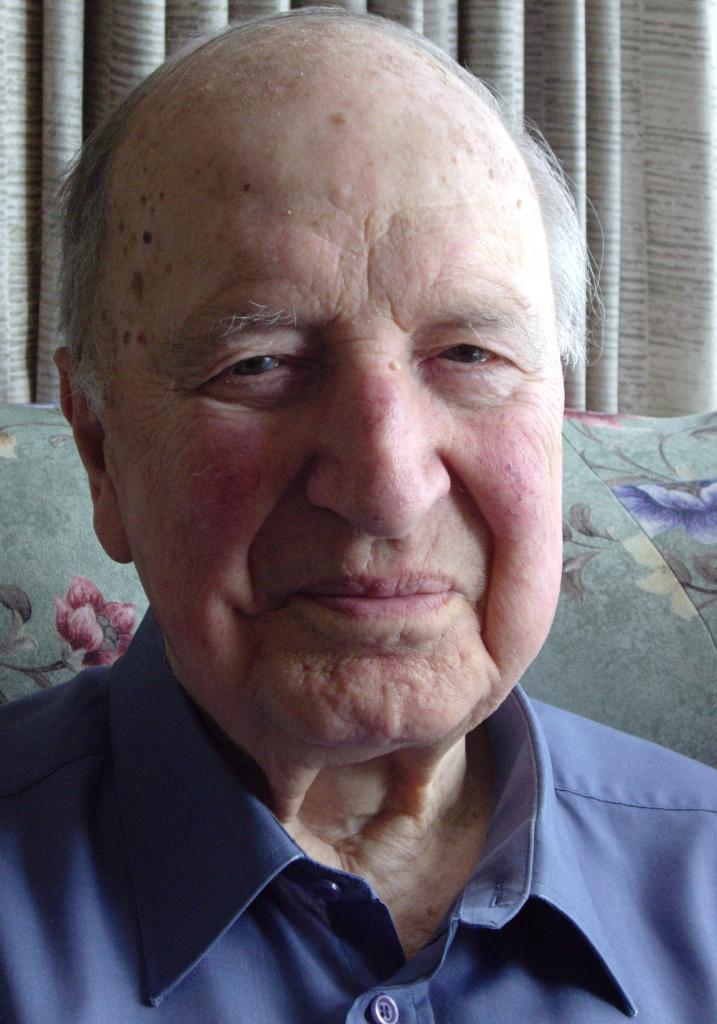 An interview with Canon Louis Thomas as he celebrates his 70th anniversary of priesthood in Summer 2013.

Yes, I don’t have any memories of course of the war but I do remember growing up in London – as a family we lived near to Lincoln’s Inn in Chancery Lane. My sister and I went to the preparatory school which the Rosminian sisters had in Ely Place and so we also went to church there. My father wasn’t a Catholic – he was a very good man, a perfect gentleman in every sense, unlike his son! I respected and admired him greatly. My mother was a good Catholic and a very good woman, who was keenly interested in my well-being and that I should always try to do the right thing.

When did you first think about the priesthood?

I think it had been at the back of my mind from an early age. I was very interested in the Church and in Church affairs from a very early age. My mother told me that as a young boy I used to put a pillow case over myself and preach to the family! I was inspired as a young man growing up by many of the priests I met and I became very involved in the life of the parish at St Mary’s in Chelsea. There were thoughts of me going to Paris for a time as a young man but with the war clouds gathering (this was 1937) it wasn’t the best time for that. After leaving school I worked for the Oxford University Press for about 2 years, which was a very useful experience as I worked in the shop and I worked on the publishing side. From there I entered seminary at St Edmund’s College in Ware. In our summer holidays at the seminary we used to work on the land as we were exempt from military service, provided that we took useful public service so I opted for land work on a big estate near Peterborough.

I have happy memories of my time in seminary – obviously there were ups and downs but in general they were happy years. The surroundings were very beautiful and we had the benefit of a very good man as the President of the seminary - Mgr Francis Bickford, a truly excellent man. The seminary was very full – even in the dark days of the war, there were always about 80 seminarians.

When were you ordained?

I was ordained in the middle of the war in 1943, as bombs were falling and land mines were being dropped. But we survived! My first parish was at St Agnes, Cricklewood – my fellow assistant was Fr Philip Harvey, who became Bishop Philip Harvey – a great man. We both went out as wardens during the war to help people in whatever ways we could. Cricklewood was a very informing place – the then parish priest, Fr George Bishop, was one of the old school but a fatherly man, traditional in his outlooks but very kind in his own way.

Since those first few years in Cricklewood I have served in a number of parishes – in Burnt Oak, at Holy Redeemer, Chelsea, and then St Mary’s, Chelsea, followed by St Mary Moorfields, and then five years at St Mary and St Joseph’s in Poplar in the early 60’s when the Second Vatican Council was beginning. From there I went to St Philip the Apostle’s in Finchley Church End, where I was the parish priest for 29 years until retiring in 1993. Those were extraordinary years, especially as I had the great joy of living through the great years of Vatican II. I always thank God for those years of the Council – it really was like the road to Damascus!

Why did Vatican II mean so much to you?

When I came to Finchley, I told the people that I was in love with Vatican II and as an obedient servant of the Church I wanted to implement the ethos and teachings of the Council as faithfully as possible. I was particularly excited by the wonderful bringing to life of the liturgy, not just in the language but in the spirit of the changes. Vatican II made me treasure the priesthood even more and helped me to live my priestly life in a deeper way. I thank God every moment of my life for Vatican II and everything that it means – indeed I would see myself as a servant of Vatican II.

What was it like to finally retire from parish life?

We retire because it is mandatory to resign at 75, but I think I can say that the years since then have been almost as busy as they were before! I have helped out with some hospice work and have always had a very keen interest in ecumenism, and putting it into practice. I continue to attend all the meetings of Churches Together in Finchley. Perhaps one sadness for me over the years has been the lack of enthusiasm for ecumenism amongst others.

What advice would you give for the 8 men recently ordained to the priesthood for Westminster diocese?

My basic advice is that life is to be lived and not just endured! My next advice is that the priestly life is a life of service and as such it must be a joyous ministry. It can’t just be about abiding by the rules – people must see in us a real joy and happiness. The unhappy, joyless priest can do a lot of damage – we have to make it clear that we love the priestly life and that we love people. We need to have good friendships with both men and women – good friendships are one of the greatest gifts we can have. And to help us through the more challenging times, it is essential to have a regime of prayer and frequent celebration of the Eucharist.

Once again, I can’t stress how important it is to have good friendships. We need to be one of the community. I still have a big circle of friends who keep me very active. I go to them and they come to me – but perhaps I go to them more because they are better cooks than I am! I am privileged still to have so many good friends – they have all been making a big fuss of me as we celebrate my 70th anniversary – indeed, we seem to have been celebrating it for quite a long time now! And I continue to thank God for this great gift of the priesthood and all the different experiences he has given me over the years, so I wish these 8 men and all who follow them the same joy which I have known in my priestly life.