A New Year for our Seminarians 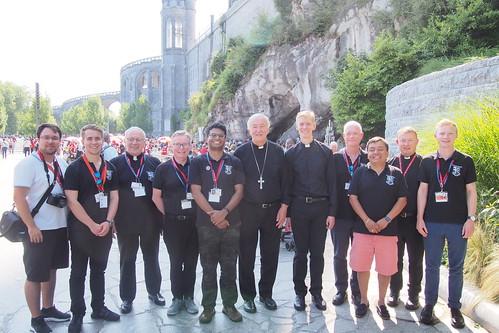 In early September, the seminarians of Westminster diocese will gather together with the Cardinal and Bishop John Sherrington for the 'Westminster Gathering'. This annual event affords an opportunity for all our seminarians to meet together for prayer and fellowship before they begin a new year of formation at Allen Hall and the Venerable English College, Rome.

Our seminarians have had a busy summer assisting at Hosanna House just outside of Lourdes for the month of July. They then went to be part of the annual Westminster Diocesan Pilgrimage to Lourdes at the end of July.

Two of the Allen Hall seminarians have also been on placement in Kenya, working in parishes as the guests of 'Missio'.

Early in September, the seminarians will be attending the Adoremus Eucharistic Congress in Liverpool, which promises to be an exciting gathering of Catholic Christians from around the country.

Over the course of the coming year, the seminary at Allen Hall will also be welcoming men who are part of our Seekers group and in the process of discerning whether God may be calling them to the priesthood. We expect over a dozen men to come to the meetings which happen on the last Tuesday of each month, excluding July, August and December.

Elsewhere on the Vocations pages of the diocesan website, you will find the dates of upcoming meetings and contact details for Canon Stuart Wilson, the diocesan Vocations Promoter, who can give you more information.