Love and Service in Lourdes 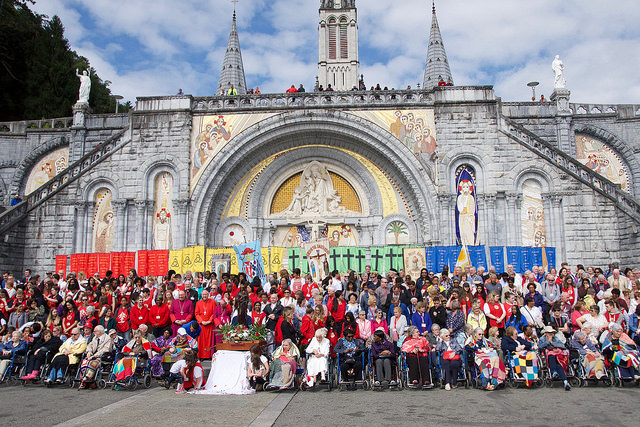 The pilgrimage to Lourdes this year was a successful event with about 700 pilgrims from various parishes joining. The theme for the pilgrimage was, ‘The Almighty has done great things for me’. The first day began with a procession from the Rosary statue, located opposite the Rosary Basilica. The Redcaps (young student helpers up to the age of 18 are called ‘Reccaps’) had arrived with the older pilgrims they were assisting, standing strong with banners displaying the theme of the pilgrimage, with one banner dedicated to Our Lady of Willesden, which had been brought along to Lourdes as a focus and reminder of our devotion to Our Lady.

The opening Mass was celebrated by Bishop Paul McAleenan and concelebrated by Cardinal Vincent, Bishop John Wilson and Fr Dennis Touw. After lunch, we had catechesis followed by the Rosary where each decade was enacted by the Redcaps. The Cardinal remarked he hadn’t seen such a beautiful sight in a long time.

In the evening the penitential service took place in the St Pius X Basilica. The vast the Basilica, with pictures of saints along the length on both sides, added to the reverence the ambience. Cardinal Vincent enriched our reflection with his homily: ‘Reconciliation is the sister of Baptism. They go together. They are better together. They need each other and together they grow and prosper. As we know, we are constantly forgetting our Baptism and all that it means. Then we find ourselves spoiling God’s good work; defacing what is lovely by speaking or acting spitefully, corrupting the goodness in others when we persuade  them into joining us in something wrong. We need reconciliation whenever we become aware of these things in our lives. We need this fresh washing, this fresh start, back to the beauty of our Baptism.’

The Cardinal added, ‘So often we think freedom means being able choose to avoid God…Freedom comes not in avoiding God’s embrace but through being held in God’s embrace, a bit like William and Harry remembering the great hugs they were given by their mother, Diana. In that kind of love we are set free.’ (The complete homily can be found at http://rcdow.org.uk/cardinal/homilies/lourdes-service-of-reconciliation-2017/

Priests sat along the length of the basilica for the Sacrament of Reconciliation while the Blessed Sacrament was exposed on the altar for us to soak in the Lord’s Presence.

After the service, pilgrims left in silence, with some having experienced an overwhelming feeling, moving them to tears. Pope Francis early in his papacy once said at a morning Mass, ‘You see, sometimes in our lives, the glasses we need to see Jesus are tears.’

The morning of the second day was dedicated to administering the Sacrament of Anointing of the Sick. Bishop John Wilson began the service with a beautiful explanation of how this sacrament is not, as many mistakenly believe, for the very sick and dying, but also for those who are unwell due to an injury, an accident, or any other reason and need a priest to pray over them. He shared the story of a young man he met in the days when he was a hospital chaplain. The man, who had had a bike accident, finally agreed to be anointed with holy oil after learning about the meaning of the sacrament for a sick person. When asked to stretch out his hands to be anointed, the man placed his hands out, the knuckles side up, on which were tattooed, hate and anger. Bishop John turned the man’s hands and blessed his palms.

The question that he posed to the congregation was, how many of us have hate and anger, perhaps not tattooed on our hands, but in our hearts and live with them every day? We were asked to place all our disappointments, worries, every negative feeling into the Lord’s hands as the priests went around blessing the sick, reminding us of Jesus on the Cross crying out to us, ‘Lay it all down and I will give you rest’: a solace in times of trouble.

After lunch, we followed the blue line on the road from the Grotto leading to St Bernadette’s parish church, Sacré-Coeur. Mass was celebrated, after which pilgrims queued to dip their finger in the baptismal font, where Bernadette was baptised. The church also houses the tomb of Abbot Peyramale, the parish priest of Lourdes at the time of the apparitions. A statue of him welcomes you at the entrance of the church.

Later that evening, we waited in anticipation as the Marian Torchlight Procession was to begin at 9pm, with the diocese leading it. The sight was nothing less than magnificent with pilgrims from different countries, joining the procession, candles lifted up at the chant of ‘Ave Maria’, a sign of the universal Church gathering as one to ask Mary intercede for us.

The third day began with the International Mass celebrated in different languages, led by Cardinal Vincent, with the Basilica of St Pius X filled with pilgrims from the world over. The full text of the homily can be found here http://rcdow.org.uk/cardinal/homilies/lourdes-international-mass-2017/

Later in the evening, we returned to the Basilica of St Pius X for a meditation on the Stations of the Cross, a first of its kind for our annual pilgrimage. It featured a slide show of each station with images of the Upper Stations, as passages were read and the choir sang to aid our reflection.

The fourth day started off with Mass at Cité St-Pierre, aka the Cathedral in the Trees, celebrated by Bishop John. The sight of pews made of grass and stones, the congregation listening to the word being shared by the celebrant was akin to the sheep listening to their shepherd.

Later that afternoon, Cardinal Vincent led the Blessed Sacrament Procession winding its way solemnly around the domain to the Basilica of St Pius X, filled with pilgrims waiting in silent reverence. People from different cultures, races, regions, and communities, all bowed down for Christ, truly present in the monstrance. This sight affirmed our individual faith in the marvels the Lord has worked in our lives and continues to do so, and how much we as humans thirst for his mercy and his grace to be bestowed upon us.

The final day of the pilgrimage had arrived, with the closing Mass at the Grotto where all the pilgrims sought Our Lady’s final blessings until they could set foot on this holy ground once more. After Mass, the diocesan candle was lit along with a candle for the victims of the Grenfell Tower and another from the Shrine of Our Lady of Willesden. This marked the end of our pilgrimage, with the faith that we may return next year stronger and brighter with the flame of the Virgin Mary’s love and her Son’s mercy shining in the lives of all those we meet as we return to our daily lives at home. 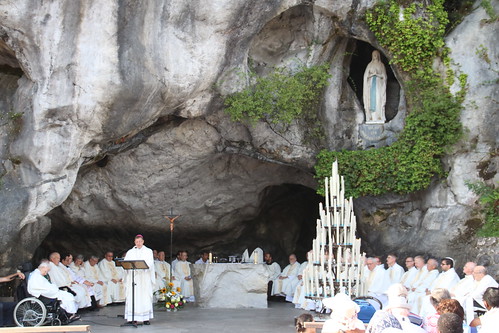 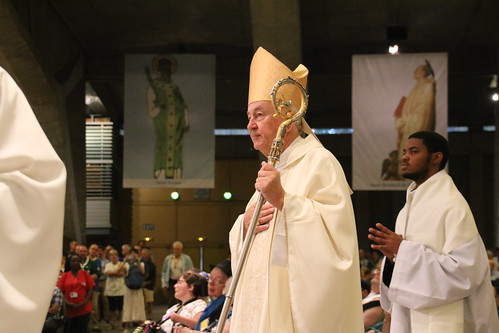 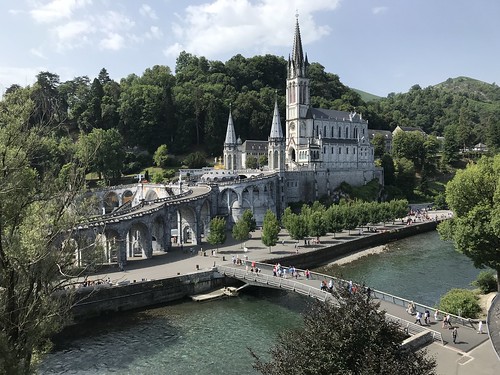