Votes for Women! The Catholic Contribution 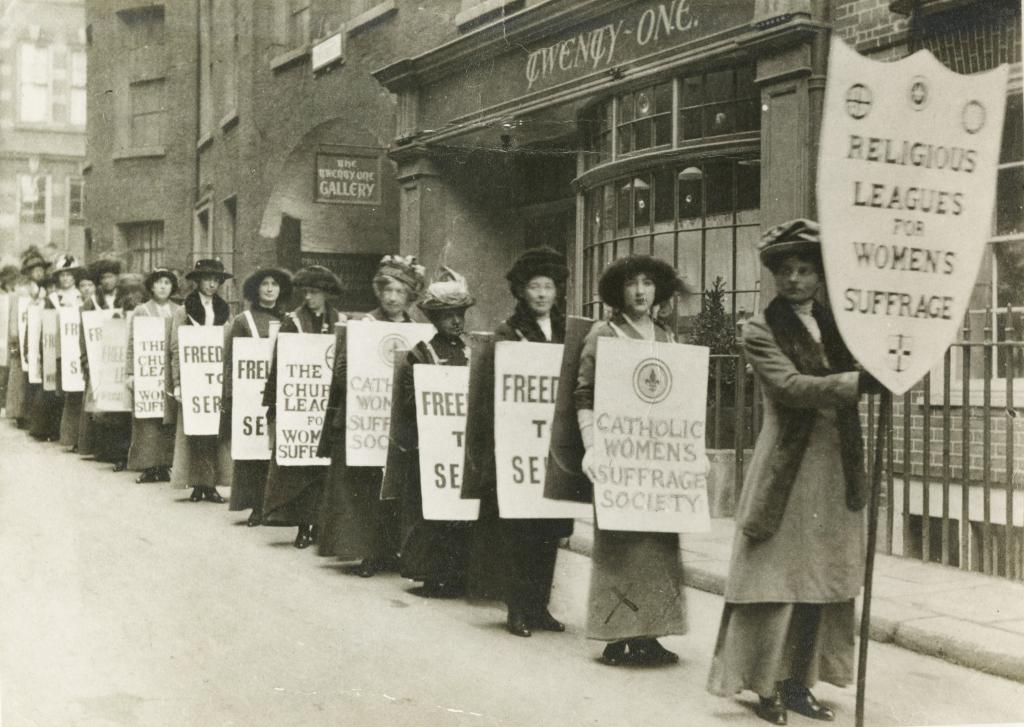 It was a century ago this month that women, or at least some women, were granted the right to vote in this country. The Representation of the People Act gained the royal assent on 6th February 1918 and brought sweeping changes to our electoral system. It was not simply about women’s suffrage. Most property qualifications for men were abolished so that all males over 21 and resident in their constituencies were able to vote. Only women over the age of 30 who met the minimum property qualifications could vote but it was a significant change and the fruit both of wartime conditions and years of campaigning by suffragists and the more militant suffragettes.

What, though, was the attitude of the Catholic Church to the suffrage movement? Normally it is cast in a negative light, although it could be argued that for many centuries the only example of women voting was provided by religious orders, where the female sisters gathered to elect their superior and have their say on other important decisions. Indeed, in the Holy Roman Empire such was the power of certain abbesses, including those of Quedlinburg, Gandersheim, Lindau, Buchau and Obermünster, that they ranked as princes and sat as voting members of the Diet (or parliament).

In Victorian Britain, however, many Catholics, along with many of their fellow citizens, were suspicious of the arguments in favour of universal suffrage; some were outright opposed. Cardinal Manning told an audience at St Mary Moorfields in 1871 that he hoped English womanhood would ‘resist by a stern moral refusal, the immodesty which would thrust women from their private life of dignity and supremacy into the public conflicts of men.’ Such views might appear, in the words of one historian, as a curious mix of misogyny and chivalry. Misogyny because they denied women a voice; chivalry because they spoke of defending the home and keeping women out of the squalid world of male politics. There were fears, too, of how the opening up of the electorate would affect politics. It was argued that votes for women would effectively mean that the husband had an extra vote. Some anti-Catholics even suggested that votes for women meant giving the power to their priest!

Manning’s successor at Westminster, Cardinal Vaughan, had more progressive leanings: ‘I believe that the extension of the Parliamentary Franchise to women upon the same conditions as it is held by men would be a just and beneficial measure, tending to raise rather than to lower the course of national legislation.’ The debate raged on and voices in favour of women’s suffrage included The Tablet and the Catholic Times. By the 1910s prominent church figures were supporting the cause, including the Archbishops of Birmingham, Glasgow and Liverpool, the Bishop of Northampton, the Dominican Bede Jarrett and the Master of the Guild of Our Lady of Ransom, Fr Philip Fletcher.

Among the suffragettes were Catholic women. Alice Morrissey was one of the founders of the Liverpool branch of the Women’s Social and Political Union (WSPU) and became that city’s first suffragette prisoner in 1907. Patricia Woodlock, another Liverpudlian, endured three prison terms. Bertha Quinn of Leeds was the first Catholic to use the tactic of the hunger strike in prison, like many other suffragettes, and endured the horrors of force feeding. Violet Bryant of Newcastle was handcuffed, forcibly fed and placed in a solitary punishment cell for seventeen days. She started to relent, though, ‘when she was forbidden to go to Mass unless she took some food.’ There were other examples too; to commemorate last month’s centenary St Augustine’s Priory, a Catholic girls’ school in Ealing, has been remembering Mother Mary Francis, a member of the Augustinian community that once ran the school. Acting at one stage as Headmistress and Latin teacher, she was known to chain herself to railings and arrested several times for breaking windows!

Catholic churches themselves were sometimes the targets of demonstrators. On 7th June 1914, just before the outbreak of war, a well-dressed woman stepped into the centre aisle of the London Oratory during Mass and shouted, ‘For Christ’s sake stop forcible feeding’. As she was being removed from the church, twelve other women chanted ‘O God, save Emeline Pankhurst and all our noble prisoners. Be with them in the hour of pain. O rouse this church and its priests to put an end to torture in the name of Blessed Joan of Arc’. That same day a woman ascended the pulpit of Westminster Cathedral and cried, ‘In the presence of the Blessed Sacrament I protest the forcible feeding of women’. None of these protestors seem to have been Catholics themselves.

Not all those who campaigned for women’s votes used such tactics. On the Feast of the Immaculate Conception 1910 two Catholics, Gabrielle Jeffery and Mary Kendall, were among the crowd outside Holloway Gaol to celebrate the release of suffragettes. They discussed the suffrage movement among the Catholic community and decided that a society was needed to promote the cause. Appeals were made in the Catholic and suffragist press and the first meeting of the new Catholic Women’s Suffrage Society (CWSS) was held at Kensington Town hall on the Feast of the Annunciation 1911. It aimed ‘to band together Catholics of both sexes, in order to secure for women the Parliamentary Vote on the same term as it is, or may be, granted to men.’ Its patron was Joan of Arc, who had only been beatified two years previously and was a popular icon of the suffragists. By June the CWSS was able to carry its banner in the ‘Coronation Procession’ involving twenty-eight suffrage organisations.

The founding members of the Society included some remarkable individuals. Alice Meynell was a well-known poet; Elisabeth Christitch, who had been born of an Irish mother and Serbian father in Belgrade, wrote on Serbian affairs for The Times and, with her mother, had served as a nurse on the Serbian battlefields during the First World War; Leonora De Alberti, who served as editor for the Society’s publication, the Catholic Suffragist, was an archivist and published historian. The members were largely middle class and, despite the peaceful approach adopted by the Society, much of its leadership had previously been involved in the WSPU. Members, though, were forbidden to wear CWSS badges at militant rallies.

Cardinal Bourne chose not to take sides in the on-going debate. Catholics, he said in a Pastoral Letter of 1913, were at liberty ‘to admit or deny the expediency of allowing women to vote at Parliamentary elections’, though he warned against ‘the excess and possible moral faults’ of militant tactics. The Society never gained his full support, however, not because of the cause it campaigned for but because of a disagreement over its affiliation with non-Catholic groups and its refusal to take a spiritual advisor. It later dropped the word ‘Catholic’ and renamed itself as ‘St Joan’s Social and Political Alliance’, which still campaigns for the rights of women. One member of the Society, however, managed to get encouragement from the highest quarters. Elizabeth Christitch had a brief audience with Benedict XV at the Vatican in 1919, who told her ‘we should like to see women electors everywhere’. His words were reported widely.

As the centenary of votes for women is commemorated, it is important to remember the Catholic contribution to the debate and to remember that the first Catholic organisation anywhere in the world dedicated to promoting women’s suffrage (CWSS) originated in England.