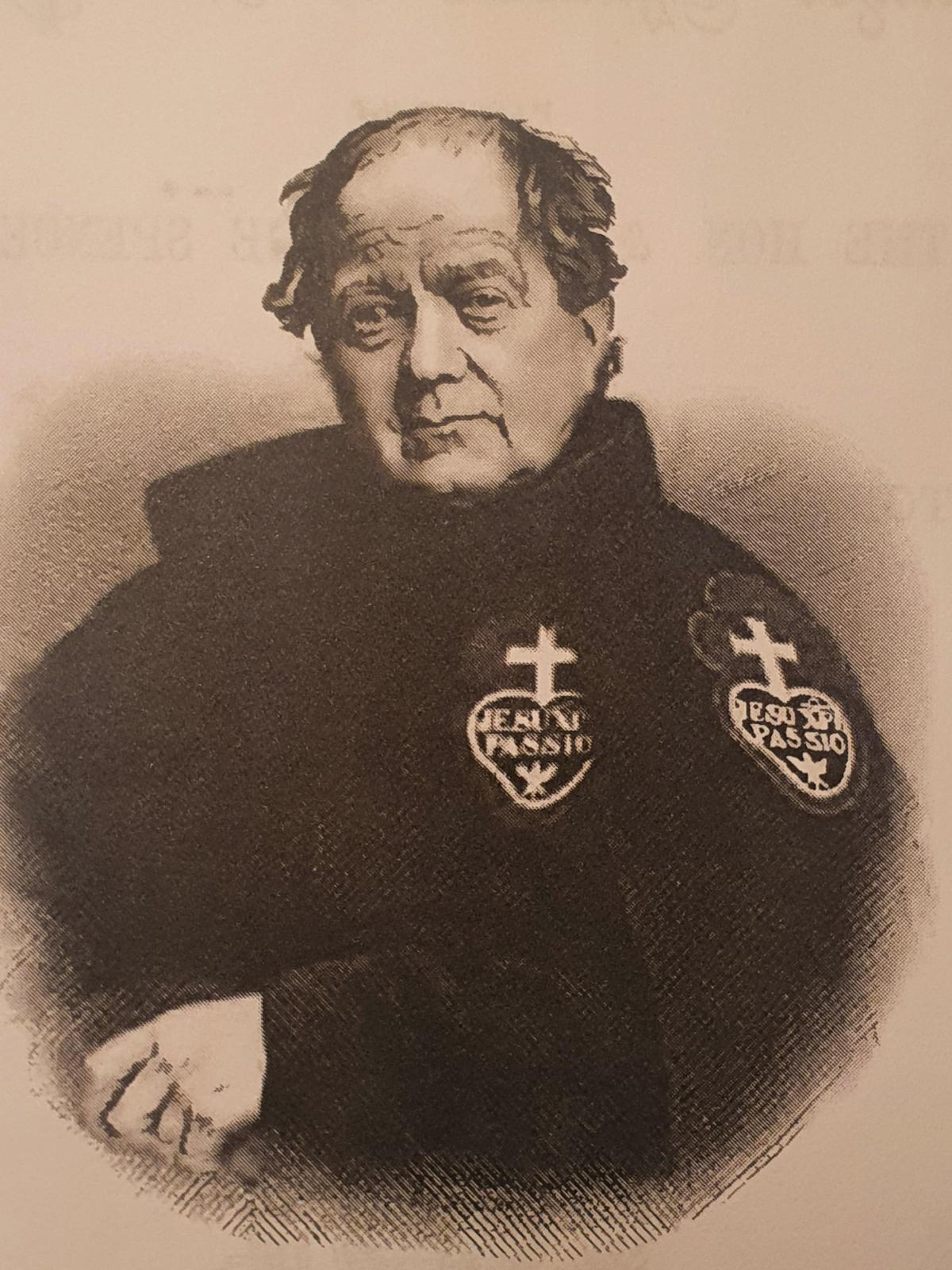 On 20th February 2021 Pope Francis declared that the nineteenth century Passionist priest, Fr Ignatius Spencer, would be known as the Venerable Ignatius Spencer, a step towards the canonization of this distant relative of Diana, Princess of Wales, and of Sir Winston Churchill. Spencer was born in London and was a frequent visitor to the capital throughout his life visiting family at Spencer House, his sister, the governess of the royal children, at Buckingham Palace and prime ministers at Downing Street and others living in the city. During his visits he would also visit the churches of London such as Moorfields, Warwick Street, Spanish Place and the Oratory and he was instrumental in the foundation of the Passionist community and church at Highgate. From 1851-57 he was Superior of the community at The Hyde, near Hendon, and, for some of this time, looked after the mission in Barnett. Spencer also gave missions in the diocese including missions in Westminster, Sommers Town, Commercial Road and Blandford Square to name but a few.

By the time of George Spencer’s birth on 21st December 1799 at Admiralty House (Ignatius becoming his name in latter years), London, the Spencers were one of the most prominent families in British Society. Having been baptised a member of the Church of England, George Spencer’s earliest years were spent between the family’s great houses of Althorp in Northamptonshire, Spencer House on the edge of Green Park in London and a villa in Wimbledon. He was educated at Eton College before being sent to study with a private tutor, continuing his education at Trinity College, Cambridge.

From an early age Spencer felt called to ministry in the Church of England, finally being ordained as an Anglican priest in 1824. In the parish of the family estate at Althorp he was tireless in his ministering to the spiritual and physical needs of his parishioners. ‘His great charity to the poor and wandering beggars was unbounded,’ wrote a parishioner. ‘At times he gave them all the money he had, and stripped himself of his clothes to give them to the distressed.’

Having become increasingly restless as to his Christian beliefs Spencer’s quest for truth finally came to a head thanks to his meeting the 21-year-old Ambrose Phillipps de Lisle. On 30th January 1830 Spencer was received into the Catholic Church and was sent to the English College, Rome, for two years of studies, being ordained a priest on 26th May 1832.

Spencer was sent to the mission in West Bromwich, where he lived an ascetic life. A convert of Spencer’s from this time recalled, ‘his sublime instructions taught me how to pray for the grace of God to guide me to his true Church. He was ever persecuted and nobly overcame his enemies. I remember one morning when he was going to visit the poor and sick, he had to pass a boys' school, at Hill Top. They used to hoot after him low names but, seeing he did not take any notice, they came into the road and threw mud and stones at him: he took no notice. Then they took hold of his coat and ripped it up the back. He did not mind but went on all day as usual, through Oldbury, Tipton Dudley, and Hill Top, visiting his poor people. He used to leave home every morning, and fill his pockets with wine and food for the poor sick, and return home about six in the evening, without taking any refreshment all day, though he might have walked twenty miles in the heat of the summer. One winter’s day he gave all his clothes away to the poor, except those that he had on, money was soon given away.’ Others recalled how Spencer ‘visited the sick constantly’ and, should someone come to his church whom he did not recognize ‘he would find them out at their own houses,’ the writer reflecting that ‘I believe that he brought many that way into the Church.’

In 1838 Spencer initiated a campaign of prayer for the conversion of England, a theme that he was to preach passionately about for the rest of his life and a mission that Pope Leo XIII was to recall over thirty years after Spencer’s death. He encouraged Anglicans, such as Newman (in 1840), to join in the prayer campaign, seeking unity in the truth of Christ. Spencer is considered by many as the pioneer of ecumenical prayer. Most of all, he sought to enlist the prayers of the Irish for England, touring around Ireland preaching of the value of the prayers of a people that felt persecuted for their oppressors.

In 1839 Spencer was sent to become a member of staff at Oscott College, his bishop hoping that those in Spencer’s charge would imbue his missionary zeal. It was noted at this time that ‘Though it cost him much, he always obeyed, and used to pray that Heaven would direct his superiors, whose direction he never refused to obey. . . he never wished for anything but the will of God, and waited patiently for its accomplishment.’

Early during his time in Rome Spencer had met Blessed Dominic Barberi. The two had become friends and Spencer had assisted in bringing the Passionists to England. Spencer finally found his ultimate spiritual home by joining the Passionists on 21st December 1846, his forty-seventh birthday. As he began his novitiate at Aston Hall, Stone, he took the name of Ignatius of St Paul, being professed at the hands of Blessed Dominic Barberi on 6th January 1848. During his novitiate he fell so gravely ill of fever, due to his work amongst the sick Irish people in the workhouse at Stone, that he was allowed to make his religious profession provisionally, as he was thought to have been in danger of death.

For the final sixteen years of his life, Spencer dedicated himself to the Passionists’ great work of giving missions rooted in hours of meditation upon the Passion of Christ and vigils of prayer in the early hours of the morning. In order to be able to visit more towns he developed a system of giving ‘Little Missions’ – visits to a parish of just three days during which he not infrequently was to be found in the confessional for up to twelve hours each day. He gave missions throughout England, Ireland and Scotland whilst also being given various roles or responsibility within his congregation. Whilst continuing to encourage prayers for the unity of the Church, Spencer spoke often of the necessity of the sanctification of the laity, knowing that this would be a great witness of the faith of the Church. He was instrumental in introducing the SVP to Britain. During the last years of his life Spencer assisted in the foundation of the congregation now known as the Sisters of the Cross and Passion.

Spencer died suddenly on 1st October 1864. In a biography published within two years of Spencer’s death, the author, a confrere of Spencer, asserted that, ‘all reverenced [Spencer] as a saint, and every day of his religious life increased the estimation in which he was held by his own brethren.’ The biographer continued by pointing out that the particular value of this statement lies precisely in the fact that ‘it is the private life of most men which lowers them in the eyes of those who have the opportunity of observing them.’

‘He Christianized everything; and did so with such grace’.