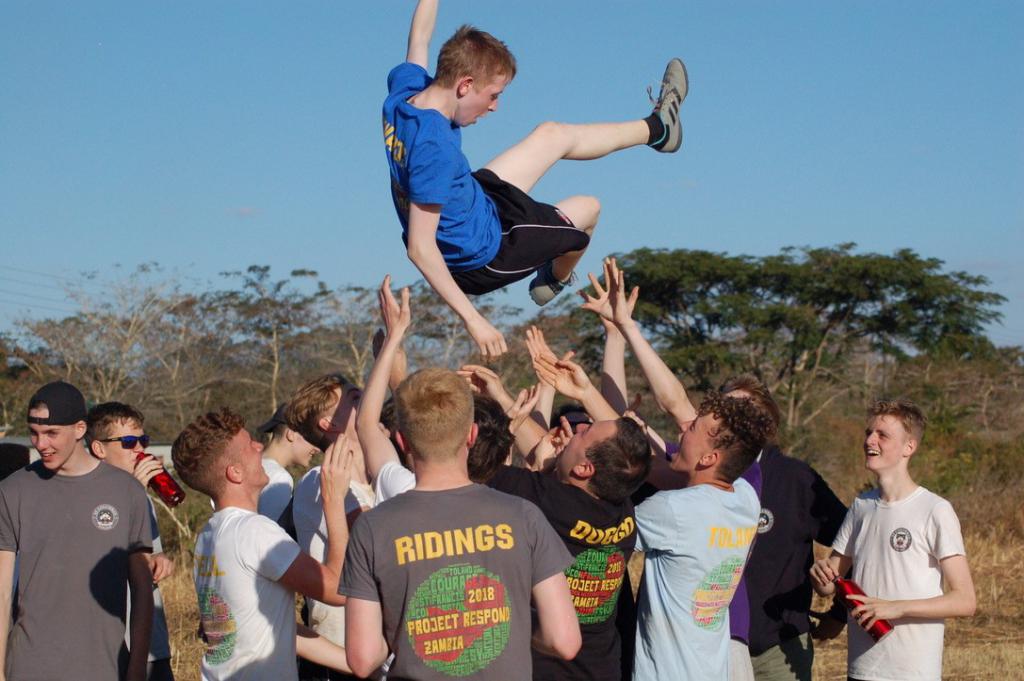 On Tuesday 10th July, 22 St Columba’s Lower Sixth students gathered in the foyer of Terminal Two at London Heathrow, filled with eager anticipation of the long trip ahead. We had spent many months planning for this moment, through many successful fundraising drives including the 24-hour sponsored cycle, a 5K run and musical performances, and much more, not to mention the Catenian bursary. We were all filled with excitement, nerves and adrenaline, anticipating what was to come in the next three weeks.

A full day and night of travelling, including an 11-hour flight to Johannesburg and connecting flight to Lusaka landed us in Zambia. We greeted Timmy our driver and made the 15-hour trek to St Francis, in the northern region of Zambia, near Kasama; this was the first section of our project. We spent 10 days renovating two science laboratories and a home economics room. Three days were spent sanding all the old paint off manually, and then plastering over all the various cracks and dings in the wall. All the rooms were painted in a light two-tone colour which really brightened each room. The teachers in charge of the rooms seemed enthused by the new paint schemes and the improvement to their teaching environment.

St Francis also gave us students the opportunity to see what a Zambian education looks like. Every Columban student on the trip was given a day to shadow a St Francis student and to sit in a number of their lessons. We had the chance to compare their education and their routine to ours. There were a number of clear differences: they take a single, final exam called ‘O-levels’, a system which should ring many bells for those of an older generation in the UK. They take eight subjects compared to our three, and we found the nature of the education differs in that much of it is rote learning, whereas the UK education system has adopted an applied and analytical approach. But the overriding observation was that, despite our differences, we all felt that we had far more in common. We all listened to the same music, followed the same football teams, and had the same interests. Many of us made friends here and look forward to keeping in contact longer term, through the use of social media.

Another day in the cramped bus landed us back in Kabwe, a few hours’ ride out from the capital of Lusaka. We had lots of projects here, the primary focus being the boys at the Robert Shitima Hope School. Our first interaction with them was through watching one of their football matches against a rival school team, delayed by an hour due to the visiting team not having brought a ball with them. The little things, eh? Our group leader, Mrs De Vos swept in and saved the day by promising to buy both teams a football to alleviate their worry about damaging the ball.
The following day was spent visiting the Makalulu slum, which is one of the largest shanty towns in Southern Africa. Here, we saw dilapidated homesteads crammed together, each struggling for space. In 2011 over 4,000 people were left in the cold when their houses collapsed, and the whole visit really brought home to us the fact that there is no security net whatsoever. We kept reflecting on the importance of friends and family to the Zambians. They are your backup. Only 60 families were provided with tents during these flash floods.

The highlight of the trip was saved to last. After feeling deflated at hearing that football was not coming home on the first night on our bus (which was incidentally also broken, further deflating our morale), we brought football home ourselves by winning the traditional match between Shitima and St Columba’s Sixth Formers. Never before in the two decades plus that the Project Respond trip has been running have St Columba’s come away victorious, but this year Shitima met their match! Guest stars Cillian Webb and Daniel from Shitima, who both scored goals must be given their fair dues!

We later bought out the local Kabwe ShopRite and donated a jersey, top and toiletries to each boy and girl at Shitima. The rest of the time in Kabwe was spent attending the local Catholic cathedral and the Mother Theresa AIDS hospice where we shook hands with those young and old suffering from AIDS. I think we were all left inspired by the love, care and dedication these nuns give. Many of them come from far-flung places around the world; we discovered that they are given around four weeks every decade to return to their homes and families. We were all certainly humbled by the experience.
At the end of the visit, 15 laptops were handed out to the university and medical students who had just finished Grade 12 at Shitima. These were greatly appreciated and essential to some courses. I met a lad who was enrolling in a Computer Science course, for which a computer was an absolute requirement and this donation greatly helped him achieve his ambitions.

Our trip ended in a visit to the more ‘touristy’ part of Zambia, Livingstone. We visited one of the seven wonders of the world, Victoria Falls, went on a game drive, went rafting along the Zambezi and topped it off by riding elephants. Here we had a chance to reflect on the experiences we had encountered.
Project Respond has been running since 1991 and offers an opportunity to work in partnership with students in both of our twinned schools in Zambia to provide contributions to their health, security and comfort. But in return they give us far more with their warm hospitality, love and friendship. The overriding message for me, certainly, from the project was to want-what-you’ve-got, and what you do with it, rather than want-what-everyone-else-has-got.