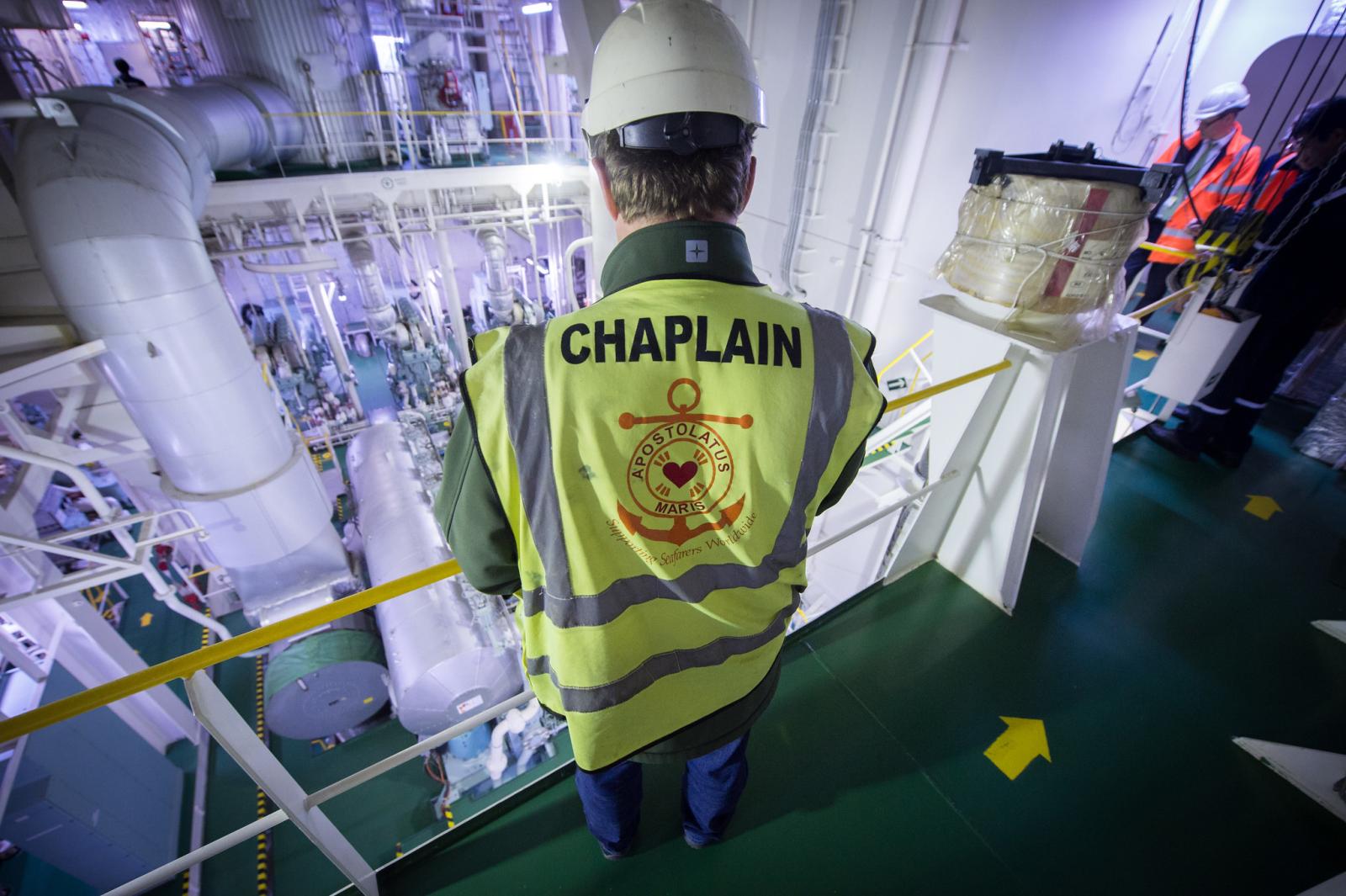 The war in Ukraine might be 1,500 miles away from the UK, but Stella Maris port chaplains, such as permanent deacon John Fogarty, who covers the Kent coast, have heard from seafarers of its terrible destruction and how it has ripped apart their families.

Recently, John explained, he was asked by a shipping agent to visit a ship in Sheerness and meet with the Ukrainian captain and first officer.

‘We are at war’
‘We sat together in the captain’s mess and I asked him how he was. He looked at me with tears in his eyes, unable to speak. And then the first officer said, “We are at war.”

‘It was a very painful moment as the reality of what he said really hit home. After a few moments the captain said, “I don’t know where my wife is.  We don’t know if our children are well.”

‘We all sat together in silence but in solidarity for some time.’

John gave the captain and first officer mobile phone SIM cards to enable them to make contact with their families back home. With the fast turnaround of ships in port, there’s often no time for seafarers to visit local shops, let alone navigate the complexities of some ongoing Covid-19 restrictions.

Both Ukrainian and Russian seafarers are shocked and horrified by what they are seeing and hearing about the war, said John.

‘I spoke to the Russian captain of a vessel with 13 Russian crew members.  His mother was half Ukrainian and he was almost apologetic, as were the crew members, simply for being Russian. It struck me that there may be many more seafarers feeling the very same.’

Family reunion
In March, a Ukrainian captain, whose container vessel was docked in Felixstowe port, told East Anglian regional port chaplain Julian Wong that his wife and daughter, who were fleeing the war in Ukraine, were desperately seeking accommodation in Poland. Julian told him that Fr Edward Pracz, Stella Maris Poland national director, had opened a refugee centre in Gdynia for seafarers and their families.

The captain immediately rang Fr Edward who confirmed he could accommodate the family. The captain’s wife and daughter made their way to Gdynia to join 50 other seafarers and their families under Fr Edward’s care.

Some weeks later, when the captain’s ship was scheduled to call in Hamburg, Stella Maris port chaplain Monica Döring arranged for him to be reunited with his family. The family drove nearly nine hours across Poland and Germany for the reunion. They spent a joyous day and night together as a family again before the vessel sailed the following day.

Caring for body and soul
When a Ukrainian seafarer was transported to Hull Royal Infirmary after breaking his back on a cargo ship, Anne McLaren, Stella Maris area port chaplain for the North of England, visited him along a Ukrainian interpreter. She discovered that the seafarer was from Kherson. His house had been bombed, and his family were still sheltering in the city.

For the several months that he was in Hull, Anne and volunteers from Stella Maris visited him regularly, bringing him clean clothes, toiletries, and SIM cards so he could contact his family back home.

Sea Sunday
July 10th is Sea Sunday when we are asked to pray for seafarers, who work in hazardous conditions, all types of weather, and even during war, to bring us many of the goods we rely on in daily life.

We are also asked to support Stella Maris and its global network of port chaplains and volunteer ship visitors. Their work is hidden, but for seafarers, far away from home and in a foreign land, they are a true lifeline and Good Samaritan.

To make an online donation to support this important ministry, please visit www.stellamaris.org.uk/donate