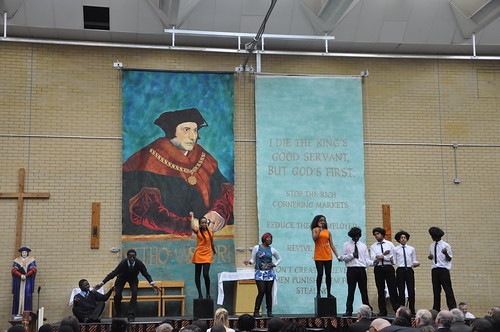 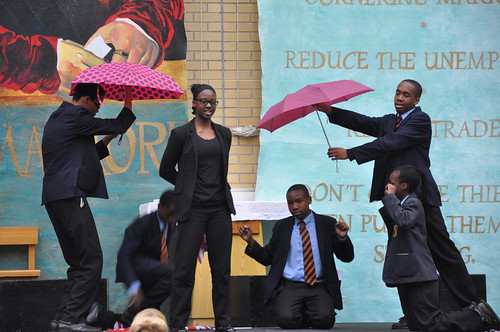 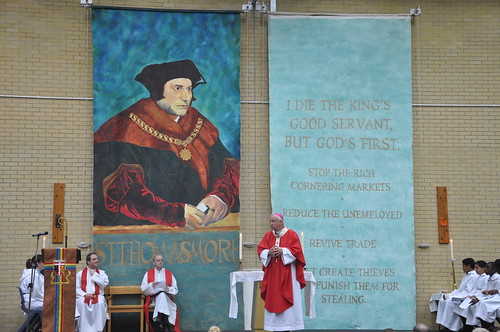 Archbishop Vincent Nichols had an excellent first impression of the school, which is expecting its best exam results to date this summer.

The Archbishop congratulated head teacher Mr Tissot and all the staff noting impeccable student behaviour and uniform along with the welcoming and positive atmosphere of the school as a whole. “St Thomas More School,” said the Archbishop, “is a good option for Catholic parents and young people in this area.”

John Williams, from the Diocese Education Department affirmed that, “St Thomas More is a school investing in a positive future for each and every student. The atmosphere here is of purposeful learning and it’s a feeling that radiates throughout the school along with each teacher’s commitment to the highest professional standards.”

Before Mass students performed an excellent piece of drama about their school’s history; the Archbishop said it was, “The best acting he had ever seen from young people, humorous, thoughtful and highly entertaining.”

During Mass an outstanding student Gospel choir led the singing and other students participated by bringing up the offertory, altar-serving and reading the bidding prayers in different languages.

In his Homily Archbishop Vincent Nichols reminded the pupils of the principled nature of their school’s patron saint, encouraging them all to emulate similar qualities of honesty and integrity and to take pride in themselves, their families, their school and their faith in God.

At the end of Mass, the Archbishop thanked everyone for inviting him and said he would remember this day for a long time to come. He congratulated the school on the outstanding improvements that have been made.

Cllr Pat Egan, the Chair of Governors, thanked the Archbishop for his attendance and acknowledged that the next school year would not be without its challenges whilst highlighting the successes that the school has achieved in the last year.