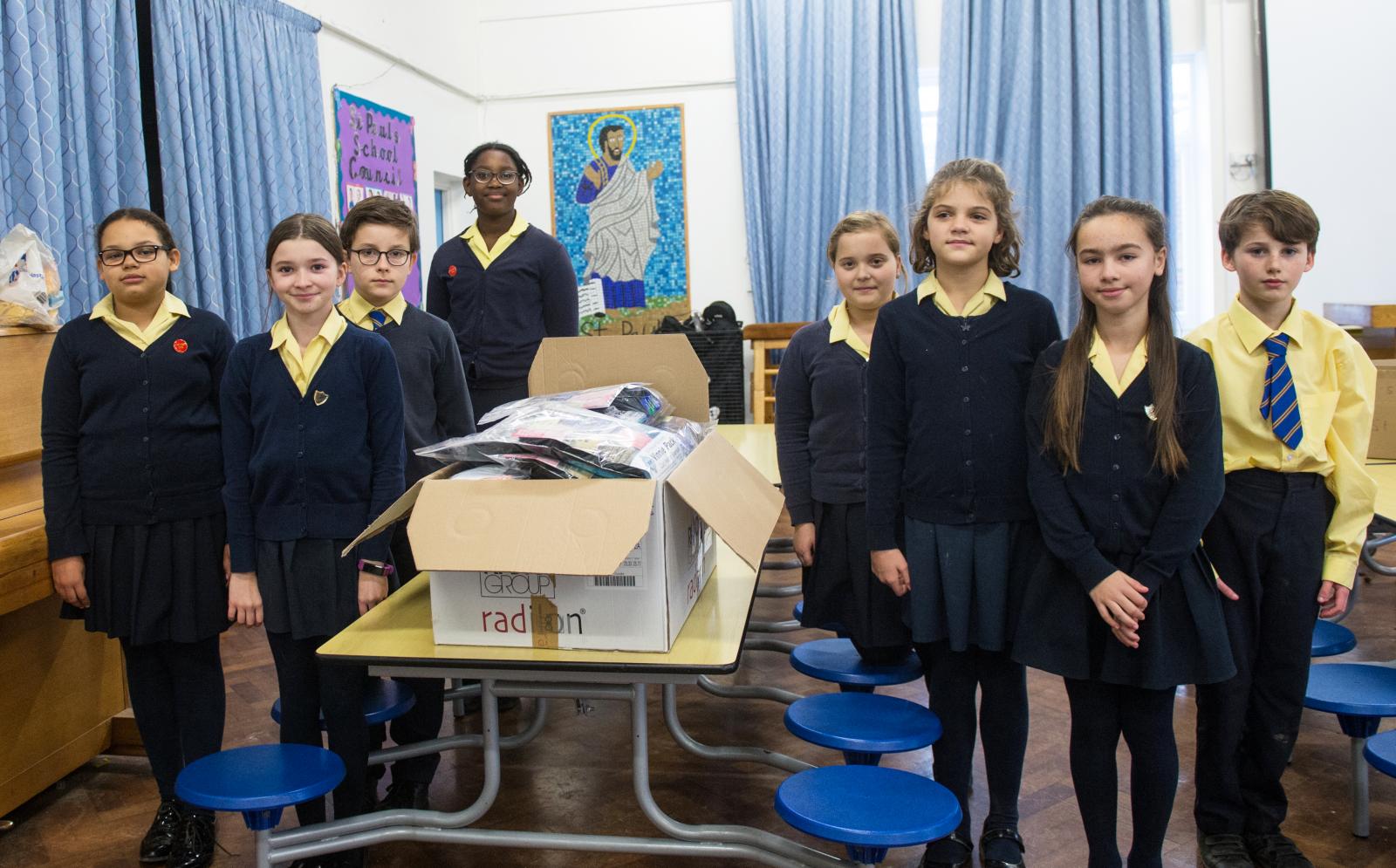 Children from 14 Catholic schools across London and Hertfordshire have taken part in a joint project to help the homeless this winter. The project, co-ordinated by Caritas Westminster, was timed to coincide with ‘World Day of the Poor’ on Sunday 15th November. 675 children packed winter essentials and hygiene items into ‘Vinnie packs’ that will be distributed by charities and community groups.

Across the fourteen schools that took part in the project, an estimated total of 3375 Vinnie packs were assembled by school children.

Katie Worton-Geer, Headteacher of St Paul’s Catholic Primary School in Cheshunt, said: ‘We were delighted to have the opportunity to take part in the Vinnie pack project. The children all thoroughly enjoyed packing the boxes and knowing that they were helping others. It was also a good opportunity for us to help teach the children about the importance of social justice and how we can make a difference through our prayers and actions.’

One child at St Paul’s said: ‘I really enjoyed making the Vinnie packs because I like helping others just like Jesus tells us to in the Bible. The boxes had lots of warm things in like socks and gloves to help the homeless on the streets over the winter month. The packs also had face masks in to help keep the people safe.'

A child from St Joseph’s Catholic Primary School in Willesden commented: ‘People usually walk past homeless people on the street and don’t do things to help so I am so happy that I was able to help.’

Another group of children from St Joseph’s said:

‘We felt a sense of pride and achievement when taking part in the Vinnie packs project. It was heart-breaking to know that there are people who are homeless and living on the street. However, it was heart-warming that we could help give those people essentials to keep them warm this winter and hopefully cheer them up knowing that we will help them.’

Collette Hough, a teacher from St Mary of the Angel’s in Bayswater, said the project was, ‘An amazing opportunity for the children to be a part of. On a daily basis the children from Year 6 have asked to go and pack more Vinnie packs for the homeless.’

As well as the practical activity, children have been able to learn about what it means to be homeless, issues of social justice and the teachings of the Catholic Church regarding caring for the poor and respecting the dignity of all people.

Among the dozens of projects that will help distribute the Vinnie packs, is Dads House Foodbank in Kensington. Dads House was originally set up to support single dads bringing up children on their own, but are now supporting families, single mums, rough sleepers and those in need of their foodbank. They have seen an astronomical rise in the numbers of people in hardship during the pandemic, as people were first furloughed and then made redundant. In some cases these people will also have lost their homes.

Rosa Lewis from Caritas Westminster was encouraged by the number of schools taking part in this project: ‘We are so pleased to see the enthusiasm of these children to do something practical for World Day of the Poor, and grateful for all the teachers who have got involved. It is not an easy time for schools at the moment, so it is wonderful to see how many are still thinking about social justice, and wanting to reach out to others.’

You can find out more about Caritas Westminster here.

Attached photograph shows children assembling Vinnie packs at St Paul’s Catholic Primary School, Cheshunt.
Photo was taken by a teacher at the school and is used with parental permission.