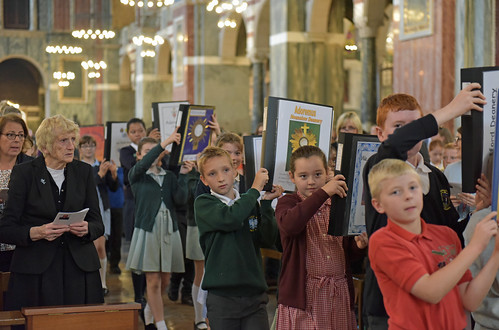 On Tuesday 18th June representatives from 14 diocesan schools joined Cardinal Vincent at Westminster Cathedral for a celebration of Mass, ending the year-long ‘Our Eucharistic Journey’ initiative, the diocesan response to Adoremus.

Throughout the year, pupils created images on the theme of the Eucharist, which were organised in deanery folders and presented to Cardinal Vincent during the Mass. The folders were put on display after Mass in Vaughan House where Archbishop-Elect John Wilson came to inspect the fruits of the pupils’ creativity.

Cardinal Vincent based his homily on some much-loved Eucharistic hymns, asking the pupils to join him in recalling the words of these hymns. Jon White, Headteacher of St Vincent de Paul Primary School in Stevenage, said afterwards: ‘It was lovely how His Eminence focused so carefully on the words of ‘Sweet Sacrament Divine’. As a school, we are also now committed to learning Bread of Life. How beautiful!’

Reflecting the sentiments of a number of other schools who also wrote in to thank the Education Service for organising the Mass, he added: ‘It was powerful to feel on pilgrimage today as a deanery, having travelled together we ended with a photo on the steps of the cathedral and really felt “at home” in the words of Cardinal Vincent.’

The Mass was truly a celebration that brought together diocesan schools from all across London in appreciation of the ‘treasure’ of this great Sacrament in the hearts of pupils, staff and parents alike.

Photos of the Mass are available here.