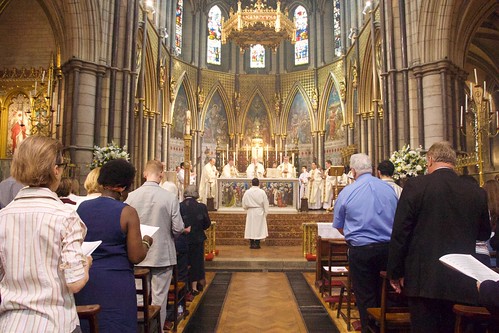 On Sunday 28th May Cardinal Vincent celebrated Mass at St James’ Spanish Church for the 50th anniversary of the London Universities Catholic Chaplaincy at Newman House.

The Mass was part of a weekend of celebrations which were attended by current students and alumni from all over the world. During the Mass Cardinal Vincent spoke about the importance of mission and finding one’s purpose. He explained that the chaplaincy is a presence in the heart of universities seeking to fulfil God’s mission.

He told the congregation of residents and supporters of Newman House that only in Jesus do we find out who we really are, and through him our purpose is revealed. He went on to say that this is important especially at university, when young people are searching for their purpose, stating that we must not forget Blessed John Henry Newman and his belief that at university we should develop as a whole person in the service of God.

Referring to the Gospel of the day, where the disciples fell to their knees before Jesus, the Cardinal added: ‘A wise person kneels before the Lord and makes a gift of their life to him’. He reminded us however ‘that it is okay to hesitate’ as the disciples did, but we must put aside our hesitation. That only by sharing the love of God will we find fulfilment.

At the end of Mass current Senior Chaplain Fr Stephen Wang thanked everyone who has contributed to life at Newman House and the wider Catholic university community in London. He also outlined  plans for the future of the university chaplaincy and encouraged everyone at Mass to continue to play a part in the life of Newman House.

Newman House was bought by the Diocese of Westminster under the instruction of Cardinal Heenan in 1966. It has since been home to thousands of students and become a centre of faith and community for young Catholics from across London.

The photos from the Mass are available here