Homily: Friendship was great gift of Sir David Amess to others 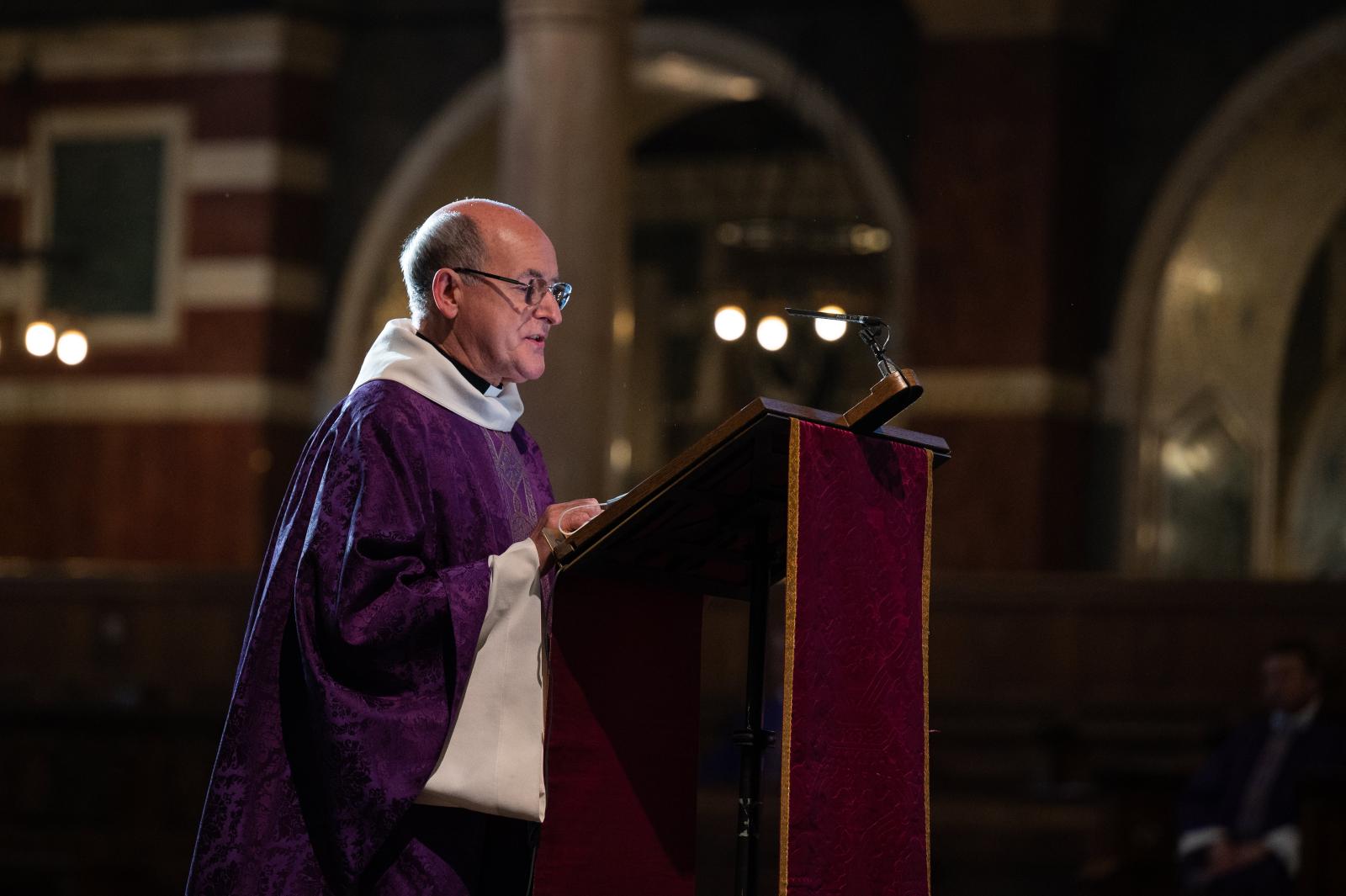 Homily given by Canon Pat Browne, Catholic Duty Priest to Parliament, at the Funeral Mass of Sir David Amess in Westminster Cathedral on 23rd November 2021

Just over 38 years ago David Amess, Julia and I stood on this sanctuary.  They were getting married and I was officiating at the wedding. He was the newly-elected MP for Basildon, just three months into the job.

In the years that followed I baptised all five of his children: David James, Katherine, Sarah, Alexandra, and Florence. And more recently – five years ago - I buried his mother Maud at the great age of 104.

Since my appointment to Parliament 12 years ago David’s office was one place I was always made welcome into for a cup of tea and a chat. So we go back a long way.

Sadly, my last visit to his office was on that awful Friday afternoon. I had just finished a wedding in the Chapel of St Mary Undercroft in Parliament, and heard the tragic news. I went over immediately to see his staff. They were devastated. There were many tears and it struck me forcefully, these people weren’t just his staff. They were his friends. They loved him. They were his team. His collaborators in the work for the constituents of Southend West.

Friendship was David’s great gift to others.  Not just to those who worked alongside him and agreed with him but to everyone in the House including those who did not share his political or religious views.

The morning after he was murdered a very senior Labour politician was interviewed on Radio 4 about David. She and he came into Parliament at the same time in 1983 when the country and politics was very polarized. She had made up her mind she would not have friendly relations with any opposition MPs. But when she met David, this was a promise to herself she was unable to keep. She told the listeners, that promise 'was impossible to sustain with David Amess because he was so friendly and so prepared to work together with other MPs on common causes'.

David was a true bridge-builder. To see the Prime Minister and the Leader of the Opposition stand shoulder to shoulder in silence and prayer, paying their respects in Southend after his death, and have them reach across the chamber in unity and fellowship was something parliament does not see very often. David’s death was the catalyst for everyone in Parliament realizing their oneness as a community working differently, but together, for the good of the nation in our world.

But his success in bringing this about, could also be measured when he was alive. David could laugh at himself and in doing so, brought many people together.

Many will know about the boiled sweet episode; when in St Peter’s Square in Rome and the Pope was passing by, how he struggled to find in his pocket his rosary beads. Seeking to pull them out for the Pope to bless, he presented instead a boiled sweet in its packet. Which Pope Benedict innocently blessed and moved on.

His dressing up as a knight and riding on a horse in the streets of Southend when he became Sir David.  These things enabled others to laugh with him.  His genuine charm, wit and warmth broke through many barriers as he looked for those things in others that they could agree on and work together.

David was also serious.  For him, life was a gift to be gratefully accepted, cherished, nourished and lived to the full.  He took his life in his two hands and threw himself into it. Indeed, he died doing so, in service of others. As today’s Gospel tells us “A man can have no greater love than to lay down his life for his friends,” …..his constituents, his country. David did so.

His Catholic faith informed his passionate commitment to the very right to life, to human dignity and to the common good. But it was also rooted in his absolute conviction that an MP's first priority was to their constituents - it was the death of a constituent from hypothermia which led to his successful Private Members Bill on fuel poverty. He championed Endometriosis UK, Prost8 and the Leigh-on-Sea-based Music Man Project, Animal Welfare and many other causes.

He was his own man and he swam against the tide when it was a matter of conscience.   And whether or not people agreed or disagreed with him on a particular issue no one could but admire his integrity – exercised at times at great cost to himself.

The cost is great too, for the spouses and children of a Member of Parliament or indeed anyone who works in Public Service. Birthday parties missed. Sunday lunches skipped and many a family evening or day out together have to be sacrificed because of the elected person’s many other commitments.  But if the cost was great to Julia and their children…and it was; the value of what they had enabled David to do for Southend West and for the nation was brought home to them in an overwhelming way when they witnessed the outpouring of love and respect people expressed in both chambers of Parliament and in the country at large and beyond.

Although there are many important people here today, this Funeral Mass is at its heart, a family funeral, where a wife and her children are giving back to God the one he so generously gave them…the man they loved.

In the words of that first scripture reading, his going from them 'looked like a disaster'; his leaving 'like annihilation' but David knew however he would go, and Julia and the family as people of faith know, he is 'at peace'.

Death is the future for everyone.
It is the Last Post of this life and the Reveille of the next.
Death is the end of our present life,
it is the parting from loved ones;
it is the setting out into the unknown…
Death, like birth, is only a transformation, another birth.
When we die we shall change our state, that is all.
And with faith in God,
it is as easy and natural as going to sleep here and waking up there.